Naupa Iglesia: An Egyptian Portal in the Andes? 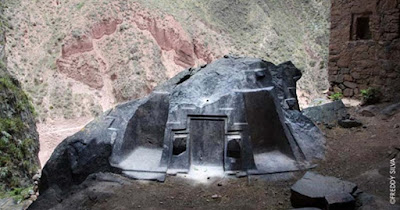 This blog has long since made the case for a remarkable global Bronze Age society that established trading palaces all over the globe.  This was a sea based system remarkably close to the much later British empire and it arose for all the same reasons.  Again it was based in the Atlantic on at least four core islands.  These were the Azores (areal extent - AE: England), Lyonese (AE: Ireland), Bahama Bank (AE: France), and Cuba (Ae: Japan).  It also dominated the Mississippi Valley, the SE USA and surely Mexico if not also South America.
Whatever lands were actually held directly as we might understand it, they certainly brought their version of modernism and a palace trade culture.

This went on for over 1500 years until it was all decapitated in 1159 BC creating a dark age.
Their technology included bronze tools for rock cutting and Bronze Age Mathmatica that worked with ratios.  Thus we discover these conforming artifacts all over the world.  They also appreciated what is called blue stone.  More that enough to establish the Atlantean signature..

Naupa Iglesia: An Egyptian Portal in the Andes?
15 DECEMBER, 2016 - 14:48 FREDDY SILVA
http://www.ancient-origins.net/ancient-places-americas/naupa-iglesia-egyptian-portal-andes-007198?nopaging=1
Halfway up a near-vertical ravine in the Andes, someone carved an inverted V-shaped entrance into the mountainside. Then they sliced the bedrock with great precision to create a shallow door that goes nowhere; the same design appears in ancient Persia and Egypt. Then for good measure, they carved an additional altar with three alcoves into an outcrop of bluestone.
This sacred site is named Naupa Iglesia, or more accurately, Naupa Huaca.

It’s not by accident such 'doors' are referred to as spirit doors or windows into paradise: a naupais an inhabitant of the spirit world, and as it happens, the false door of Naupa Huaca marks the passage of the earth’s electromagnetic currents, the very forces that are known to generate out-of-body states.
It takes a hard heart to stand here and not feel the palpable energy of place. It is transfixing as much as it is bewitching. And perhaps that is the foremost reason why this site was carved in such a remote and inaccessible location in Peru. The very nature of its location makes any astronomical relationship unlikely, so we are open to entertain the idea that this temple was used for a restricted shamanic ritual. Temples of a similar nature in other parts of the world typically require a difficult access, followed by a sensory deprived environment which generates conditions for the candidate to access other levels of reality.
Musical Measurements

The measurements of the main portal of Naupa Huaca are not random, they conform to musical notation. The length to height ratio is 3:1, making a perfect fifth in the second octave; the ratio of the alcove is 5:6, a minor third.


The 5:6 ratio is both unusual and filled with specialist information. It perfectly describes the movement of the Earth, whose pole completes one full rotation of its axis every 25,920 years, while the plane of the equator tilts four degrees every 21,000 years — a ratio of 5:6. This accurate calculation of the motion of the planet is also encoded in another unusual temple, the Bent Pyramid of Egypt, whose slope angles encode the same ratio. 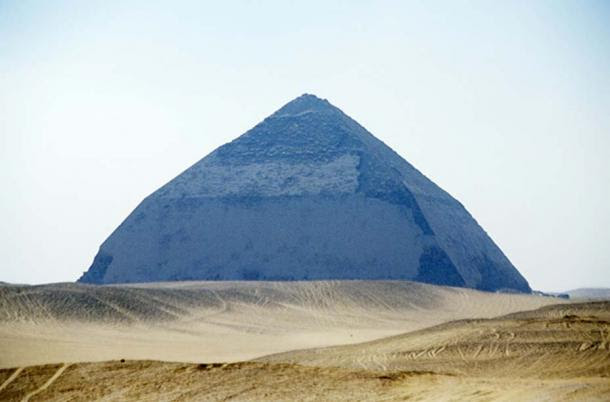 Bent pyramid of Sneferu, Dahshur, Egypt. (CC BY-SA 3.0)
Dominating the unique environment of Naupa Huaca is the cave ceiling. It has been expertly sliced like butter (bear in mind this we are at an altitude of 9800 feet on the side of a ravine), and smoothed with laser-like precision to create two different yet specific angles: 60 degrees and 52 degrees. There is only one other place on earth where these two numbers appear side by side: the slope angles of the two major pyramids at Giza. 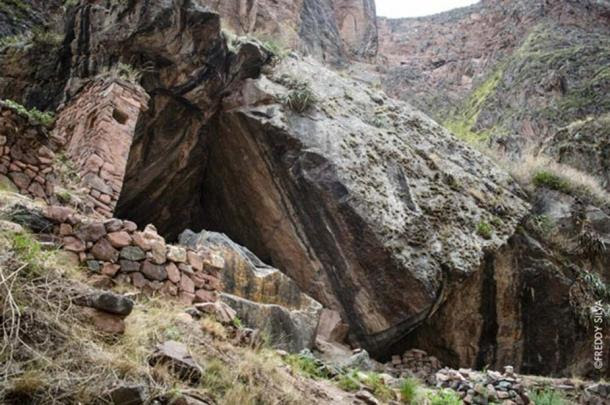 Stone angles on the sheer faces of ravine at Naupa Iglesia. Photograph © Freddy Silva
The violent earthquakes that regularly lay this region of the Andes to waste have exacted a fair share of damage at this site, preventing further exploration into this man-made cave beyond a latter-day low wall of stacked stone that prevents rubble from a partly collapsed ceiling to rain down onto the curious and the intrepid who venture up the mountainside trail.
Still, there’s another anomaly to be examined in this temple: its creator picked the exact spot on the side of the mountain where exists a single outcrop of bluestone. Appearing in stark contrast with the surrounding sandstone, bluestone contains a type of crystal that was used in early radio receivers for its excellent piezoelectric qualities. The rock is also magnetic, another useful feature for shamanic journeying.
Bluestone was also specifically chosen to build the oldest part of Stonehenge, leading its architects to source this sonorous granite 150 miles away in Wales. 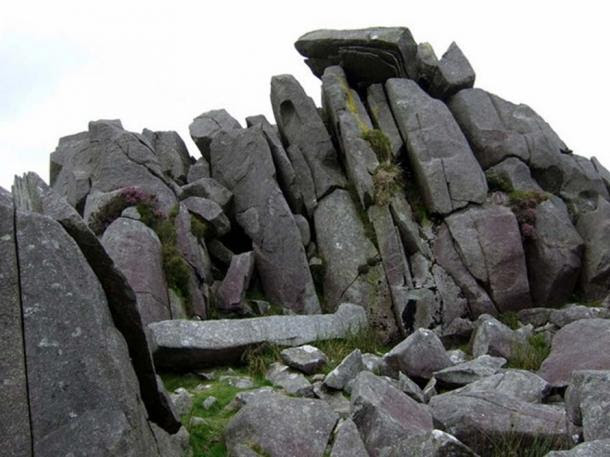 Stones at Carn Menyn, Wales, as an example of bluestone.These dolerite slabs, split by frost action, seem to be stacked, and ready for the taking. (Ceridwen/CC BY-SA 2.0)
The outcrop has been expertly shaved into three niches, and although partly dynamited by religious fanatics, the delicate workmanship is still evident. Its central niche is similarly cut to musical notation, the ratio 3:2, a perfect fifth. 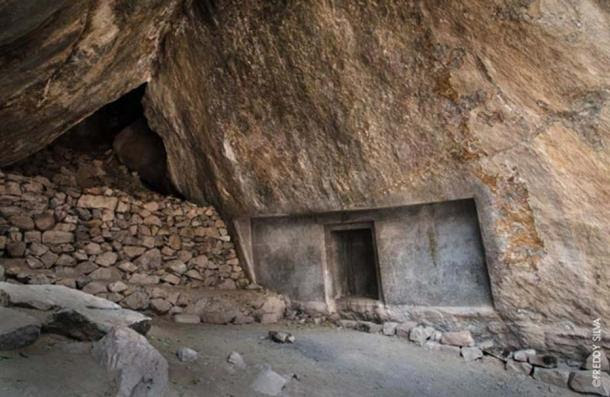 Naupa Huaca. Photograph © Freddy Silva
The three-step design defines the Andean view of the Universe: the creative underworld, the physical middleworld, and the etherial otherworld. The concept is idealized in the chakana, commonly known as the Andean Cross. Chakana literally means 'to bridge or cross', and it describes how the three levels of existence are connected to each other by a hollow reed — a culturally shared concept in ancient Persia, Egypt, the southwestern United States, and the Celtic world. The oldest iteration of the design is carved on a monolith at Tiwanaku, the world's oldest temple complex, and it differs from the later version in that it is based not a square but a rectangle with a ratio of 5:6. 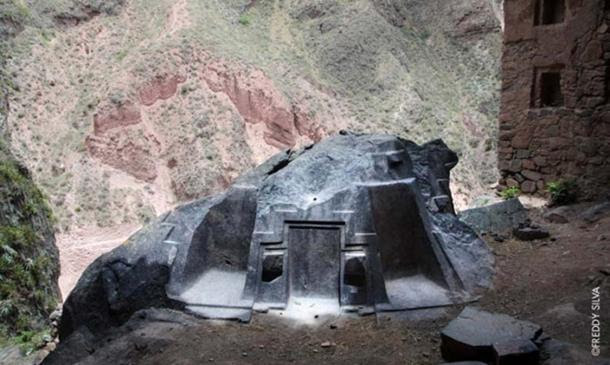 A carved altar with three alcoves into an outcrop of bluestone. Photograph © Freddy Silva 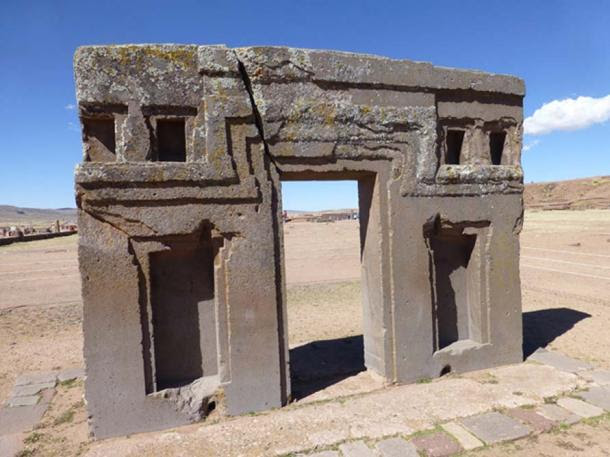 Ruins at Tiwanaku, Bolivia. (CC BY-NC-SA 2.0)
It seems that Naupa Huaca was designed by a cosmic mason for anyone wishing to access another level of reality and communicate with gods which, back in the day, were either forces of nature, or elevated people who personified or understood how to control such forces.
Who Created Naupa Huaca?

As to the identity of the architect, certainly the Inca can be dismissed. Inca stonework pales by comparison in both scale and quality, they merely inherited and maintained a culture that was, by their time in the 14th century, already long vanished; even the ancient Aymara claimed such temples were made long before the Inca.

The style of stonework at Naupa Huaca is consistent with that found in Cuzco, Ollantaytambo and Puma Punku, and what these sites hare in common is the myth of a travelling builder god named Viracocha who, together with seven Shining Ones, appeared at Tiwanaku after a catastrophic world flood, since dated to 9703 BC, to help rebuild humanity. 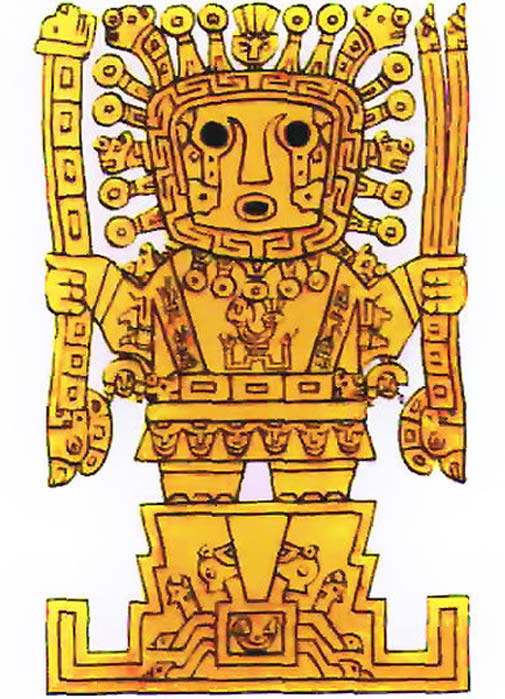 Viracocha. (Public Domain)
Interestingly, the same group appears at the same time in Egypt as the Aku Shemsu Hor — the Followers of Horus.
© FREDDY SILVA, 2016 | www.invisibletemple.com
Freddy Silva is a best-selling author, and a leading researcher of alternative history, ancient knowledge, sacred sites, and the interaction between temples and consciousness. He is author of many books, including THE LOST ART OF RESURRECTION
--
Top Image: Shrine at Naupa Iglesia. Photograph © Freddy Silva
By Freddy Silva
Posted by arclein at 12:00 AM