First Study on Vaccinated vs. Unvaccinated Children Pulled from Web 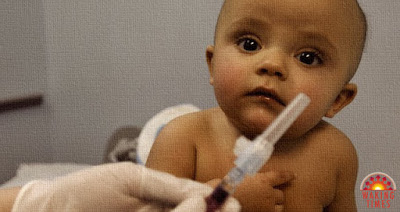 How is it possible that this happens to be the first such study of its kind when it is certainly the first thing any promoter would run?  That alone tells us that we are dealing from the get go with fraud of some sort  and they went ahead anyway.  It is just that all those folks then involved are now dead.  We are talking about sixty years.

Recent discovery that the carrier fluid included peanut oil and is implicated in the rash of peanut allergies alone informs.

This is all science at its worst and obviously we need to bankrupt several huge corporations to get the message across.

Seriously, i should not have to be paying attention to vaccine carrier fluids in 2016.  Yet without trying they are directly implicated in peanut allergies and autism whose costs have been dumped unto society.  They are not small costs either.

What is worse is that the impact was rather predictable as well. How can shoving raw food directly into the bloodstream along with solvents have a happy ending?  And of course all doctors raising the alarm were repressed.


First Study on Vaccinated vs. Unvaccinated Children Pulled from Web

The results of the first ever study comparing the health of vaccinated children vs. unvaccinated children is out, and they are already causing controversy. For many – hundreds of thousands of families that have already been injured by vaccines – the results won’t be surprising, but to many others, the findings might be a little shocking. This is possibly why the scientific journal which originally published the results withdrew the study from publication.

The abstract of the study was published online in Frontiers in Public Health after being accepted November 2. The study compared children’s health via surveys of mothers who home-schooled their children aged 6-12 years. Nearly 40 percent of the children had never been vaccinated, so the control group was adequate to do a good comparison against children who had been vaccinated.

After heavy criticism from the public and scientific community due to the results of the study, though, it was retracted. Why? Those that were vaccinated were three times more likely to be diagnosed with neurodevelopmental disorders such as autism.

“A total of 415 mothers provided data on 666 children, of which 261 (39%) were unvaccinated. Vaccinated children were significantly less likely than the unvaccinated to have been diagnosed with chickenpox and pertussis, but significantly more likely to have been diagnosed with pneumonia, otitis media, allergies and NDDs (defined as Autism Spectrum Disorder, Attention Deficit Hyperactivity Disorder, and/or a learning disability).”

“In this study based on mothers’ reports, the vaccinated had a higher rate of allergies and NDD than the unvaccinated. Vaccination, but not preterm birth, remained significantly associated with NDD after controlling for other factors. However, preterm birth combined with vaccination was associated with an apparent synergistic increase in the odds of NDD. Further research involving larger, independent samples is needed to verify and understand these unexpected findings in order to optimize the impact of vaccines on children’s health.”

The initial backlash was significant. Public comments included, “this study is of poor design, though not impossible results. Study relies of self-report of moms, inducing bias,” and, “Another garbage vaccine study in Frontiers journal. Scientists, stop reviewing/publishing there.”

When the paper was pulled, the publishers were also accused of not following a proper retraction process. Though the journal isn’t the first to pull a vaccine paper amid public criticism — in February, Vaccinetemporarily removed — then soon retracted — a paper linking the vaccine for Human papillomavirus to behavioral problems in mice; a modified version of the paper was later republished, the retraction is suspect considering how quickly the paper was pulled. When the publishers were asked why this happened, they simply responded that the paper was submitted for review, but had not been approved.

Researchers like Catherine J. Frompovich likely wouldn’t think the study is so ‘hilarious’ as Science Blogs attests. She writes of a doctor in the UK who believes vaccines are indeed tied to autism. Dr. Graham Downing, who is a Neuro-musculoskeletal and Functional Medicine consultant in the UK has found that the vaccination of pregnant women increases inflammation in their bodies and also increases the risk of releasing inflammatory markers in their fetuses/infants. Such releases include phenotypes [the set of observable characteristics of an individual resulting from the interaction of its genotype with the environment.]

Downing also contends that the increased inflammation in cells caused by vaccines, also elevate in the fetal brain where cytokines release glutamates. The prefrontal lobes and the limbic system, which involves human emotions, are affected in fetuses from pregnancy vaccines administered to moms-to-be. So, not only are children outside the womb affected, but the neurological/immunological decline starts while they are still in the womb.

Downing also attests that vaccines are tied to the artificial intelligence rollout goals of the elite. As Frompovich writes,

“Dr. Downing says there are five-year and fifteen year goals for AI. The fifteen-year goal is to have AI run everything, including humans! You have to listen to his comments about that aspect—one word: “frightening!” To ‘authentic’ his remarks, Doctor cited a report issued by the White House, “A Federal Vision for Future Computing: A Nanotechnology-inspired Grand Challenge.”

Here’s what that 15-page report is about:

Create a new type of computer that can proactively interpret and learn from data, solve unfamiliar problems using what it has learned, and operate with the energy efficiency of the human brain. [3]

[Basically, it’s an artificial brain to replace the human brain. Also, they want to create a new soul for humans, too!]”

So, why are vaccine promoters so quick to dismiss, or make a drivel of a study based on mothers’ health reports of their children? Bias or no bias – it’s hard to dismiss a 300 percent increase in autism and neurological damage rates – but those reasons are left to your imagination.
Posted by arclein at 12:00 AM

Again it becomes a question of what it is possible to know. The procedure of vaccination started as a desperate defense against hopeless threats ; a dangerous experiment carried out in trials of single threat disease using adults - often prisoner volunteers - as guinea pigs. Now compare this to the promotion of immunization as a cure-all of disease administered in batched threats to children. It is completely a case of comparing apples to oranges. Worse, making a declaration of safety means no oversight over a process completely unprecedented and therefore without any possible baseline for comparison.
The Agenda 21 story is difficult to believe, but surely only the UN has the control over 'science' to make policy conform to what appears to be part of a coordinated assault on human immune response. The glyphosate assault on gut flora and pasteurization of more and more food indicates fertility control as the objective. I even saw a post from a trucker in one forum who said he had been a farmer - but his herd went sterile from consumption of GM feed. That is of course totally unscientific....and worryingly plausible.