Minerva Wildman and It's Pets 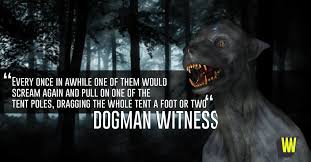 We do not get any detail which only proves lousy lighting.  However, the smell and the two cougar like creatrues strongly suggest a mother Giant Sloth with two well grown cubs.  It is certainly Protective enough.

Which is why i am bothering to show you this.


We have thousands of Bigfoot sightings which are pretty conclusive. However, nocturnal sightings are often not overly conclusive and this is a good example of that.  A look at its face would have eliminated doubt.  In this case it is the cat like cubs that show us.  They could also be females but that seems less likely..

Near Minerva, Ohio - August 21, 1978 - 10:30 pm: Evelyn Clayton's family and friends were out on the front porch when they heard noises coming from the direction of an old chicken coop just to the right of the house. They then saw two pairs of yellow color that seemed to be reflecting a porch light. Scott Patterson went to his car and turned the headlights on in hopes of getting a better look. Now they could see that the eyes were on what appeared to be two "cougar type" felines. Then the group saw what looked like a large bipedal hairy creature step in front of the large cats as if to protect them. This creature then proceeded to lurch towards the Patterson's car.

The witnesses fled to the house and called the sheriff's office. While waiting for the deputies, the bipedal creature appeared at the kitchen window. Patterson then pointed a 22-caliber pistol at it, while Evelyn Clayton loaded a .22 caliber rifle. The creature stood outside the window for close to ten minutes. They decided they would not shoot it unless the creature made any advances toward them. It suddenly left without harming anyone. A strong stench resembling 'ammonia sulfur" remained in the area long after the creature was gone. - Source: Ron Schaffner & Witness
Posted by arclein at 12:00 AM