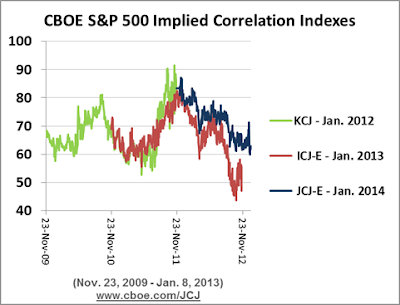 This is not too useful for retail investors who simply cannot get commission levels low enough or their trades easily executed. Also you need to be truly proficient in options as well.  In short you need to be an active experienced trader.

Putting all that aside there is profit now to be made here and it is likely to work well enough for years and that is all you can ask of any trading strategy.

Otherwise this is a bit of investment arcana that one should be aware of..
.
The Dispersion Trade

There is a mathematical relationship between the price of an index and the constituent stocks that comprise the index. That seems pretty straightforward.

It is also arbitrageable—if there is a price discrepancy between futures on the index and the underlying stocks, you can buy one and sell the other and make an arbitrage profit.

What a lot of people don’t know is that there is a mathematical relationship between index options and options on the constituent stocks that comprise the index.

As it turns out, index options tend to be chronically overpriced, so there is money to be made by selling index options and buying single-stock options, dynamically hedging along the way. The math behind this is all pretty complicated.

The dispersion trade has been around for a while, but in the early days, it wasn’t easy to effect because of wide bid-ask spreads. There were a few floor market-makers that traded dispersion quite profitably, though, most notably, Timber Hill1.

Timber Hill had a sophisticated operation involving dozens of traders on trading floors around the world. These traders weren’t terribly sophisticated (the guy in our pit was a former construction worker), and they all had a handheld computer that just told them what options to buy or sell.

There was a giant computational engine in headquarters somewhere that identified which index options had to be sold and which single-stock options had to be bought, then fed that information to the handhelds of the traders on the floor. I’m sure they cleaned up.

At Lehman Brothers, we had one person dedicated to the dispersion trade and nothing else. She sat on the corner of the floor and talked to no one. Rumor was that she made more money than all of us put together.

So if you are a dispersion trader, you’re essentially trading correlation, which is the idea that stocks all move together or they don’t.

This Can’t Be Hard

I think the post-Trump environment is a pretty easy trade, but for a lot of people, it isn’t. You’ve had massive dispersion on a sector basis (financials going up, utilities going down), and for once, people have something they can trade, and they are screwing it all up.

So the number one question people are asking right now is: Will this dispersion continue?

And my answer is, yes, unequivocally.

This is the new regime; get used to it. And it is being driven primarily by interest rate expectations.
We’ve been over this before. Rates have shot up, because:
High interest rates are:
This is a huge oversimplification, but I’m all in favor of keeping things simple.

So if that really was the turn—if we are now in a bond bear market, instead of a bond bull market—and the bear market lasts 5, 10, or 35 years…
The dispersion is going to continue.

But This Is Good News!

The last eight years have been awful, and that is not a political statement. Sure, the market went up 200%, but it was awful.

It was the toughest trading environment known to man. And it drove a lot of people toward passive strategies. Vanguard has taken in something like $270 billion this year. It’s insane.

Or else you are going to simply prove what all these people have been saying for the last eight years, which is that everyone should just put their money in index funds and be done with it. Although if you really believed that, you would probably not be reading this newsletter.

I seem to remember it being easier to make money in the 1990s. I also recall that interest rates were higher in the 1990s. I think there might be a connection. So this is really like Back to the Future, in a way.

It’s been said that something like two-thirds of traders today can’t even remember a time when we had non-zero interest rates.

I remember being able to get 6.5% in a money market mutual fund. You want to talk about easy money. You get short rates up to 6.5%, and I am going to put it all in a prime money market fund, quit writing newsletters, and live off the interest.

One postscript: I talked a lot about options in this piece, and I’m sure the whole discussion of the dispersion trade went over most people’s heads. I might teach an options course someday. We’ll see.

But in the interim, I have a book recommendation for you. I was given an advance copy of Managing Expectations by Tony Saliba, one of the original Market Wizards, which is being released next month.

When I was on the trading floor, I was raised on the Sheldon Natenberg book, Option Volatility & Pricing, but this is even better. I think it’s going to be the new standard by which all options books are judged. Check it out.
Posted by arclein at 12:00 AM