What Do Ants Know That We Don’t? 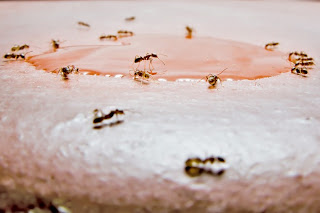 This is a rich comparison between the way ants communicate and organize, compared to that of our own.  Unsurprisingly, they are similar and naturally suggestive as well.   This item suggests that it may even by possible to learn from this.  In the meantime, it is an excellent teaching analogy for computer science.

What Do Ants Know That We Don’t?

Ever notice how ant colonies so successfully explore and exploit resources in the world … to find food at 4th of July picnics, for example? You may find it annoying. But as an ecologist who studies ants and collective behavior, I think it’s intriguing — especially the fact that it’s all done without any central control.
What’s especially remarkable: the close parallels between ant colonies’ networks and human-engineered ones. One example is “Anternet”, where we, a group of researchers at Stanford, found that the algorithm desert ants use to regulate foraging is like the Traffic Control Protocol (TCP) [updated with correct spelling] used to regulate data traffic on the internet. Both ant and human networks use positive feedback: either from acknowledgements that trigger the transmission of the next data packet, or from food-laden returning foragers that trigger the exit of another outgoing forager.

This research led some to marvel at the ingenuity of ants, able to invent systems familiar to us: wow,ants have been using internet algorithms for millions of years! (Wired, too, flirted with the concept of “anternet” in its Jargon Watch column last year.)

But insect behavior mimicking human networks — another example are the ant-like solutions to the traveling salesman problem provided by the ant colony optimization algorithm — is actually not what’s most interesting about ant networks. What’s far more interesting are the parallels in the other direction: What have the ants worked out that we humans haven’t thought of yet?

Deborah Gordon
Deborah M. Gordon is a Professor in the Department of Biology at Stanford. She studies the evolution of collective organization by investigating the ecology and behavior of ant colonies, and has been awarded fellowships from Guggenheim and the Center for Advanced Study in Behavioral Sciences. Gordon is the author of two books, Ants at Work and Ant Encounters: Interaction Networks and Colony Behavior.

During the 130 million years or so that ants have been around, evolution has tuned ant colony algorithms to deal with the variability and constraints set by specific environments.
Ant colonies use dynamic networks of brief interactions to adjust to changing conditions. No individual ant knows what’s going on. Each ant just keeps track of its recent experience meeting other ants, either in one-on-one encounters when ants touch antennae, or when an ant encounters a chemical deposited by another.
Such networks have made possible the phenomenal diversity and abundance of more than 11,000 ant species in every conceivable habitat on Earth. So Anternet, and other ant networks, have a lot to teach us. Ant protocols may suggest ways to build our own information networks…
Dealing with High Operating Costs
Harvester ant colonies in the desert must spend water to get water. The ants lose water when foraging in the hot sun, and get their water by metabolizing it out of the seeds that they collect. Since colonies store seeds, their system of positive feedback doesn’t waste foraging effort when water costs are high — even if it means they leave some seeds “on the table” (or rather, ground) to be obtained on another, more humid day.
In this way, the Anternet allows the colony to deal with high operating costs. In the internet, the TCP protocol also prevents the system from sending data out on the internet when there’s no bandwidth available. Effort would be wasted if the message is lost, so it’s not worth sending it out unless it’s certain to reach its destination.
More recently, I’ve shown how natural selection is currently optimizing the Anternet algorithm. I’ve been following a population of 300 harvester ant colonies for more than 25 years, and by using genetic fingerprinting we figured out which colonies had more offspring colonies.

Colonies store food inside the nest as a survival tactic. On especially hot days, colonies that are likely to lay low instead of collecting more food are the ones that have more offspring colonies over their 25-year lifetimes. Restraint therefore emerges as the best strategy at the colony level. Long-lived colonies in the desert regulate their behavior not to maximize or optimize food intake, but instead to keep going without wasting resources.
In the face of scarcity, the algorithm that regulates the flow of ants is evolving toward minimizing operating costs rather than immediate accumulation. This is a sustainable strategy for any system, like a desert ant colony or the mobile internet, where it’s essential to achieve long-term reliability while avoiding wasted effort.
During the 130 million years or so that ants have been around, evolution has tuned ant colony algorithms.
Scaling Up from Small to Large Systems
What happens when a system scales up? Like human-engineered systems, ant systems must be robust to scale up as the colony grows, and they have to be able to tolerate the failure of individual components.
Since large systems allow for some messiness, the ideal solutions utilize the contributions of each additional ant in such a way that the benefit of an extra worker outweighs the cost of producing and feeding one.
The tools that serve large colonies well, therefore, are redundancy and minimal information. Enormous ant colonies function using very simple interactions among nameless ants without any address.
In engineered systems we too are searching for ways to ensure reliable outcomes, as our networks scale, by using cheap operations that make use of randomness. Elegant top-down designs are appealing, but the robustness of ant algorithms shows that tolerating imperfection sometimes leads to better solutions.


Optimizing for First-Mover Advantage
The diversity of ant algorithms shows how evolution has responded to different environmental constraints. When operating costs are low and colonies seek an ephemeral delicacy — like flower nectar or watermelon rinds — searching speed is essential if the colony is to capture the prize before it dries up or is taken away.
Since ant colonies compete with each other and many are out looking for the same food, the first colony to arrive might have the best chance of holding on to the food and keeping the other ants away.
How does a colony achieve this first-mover advantage without any central control? The challenge in this situation is for the colony to manage the flow of ants so it has an ant almost everywhere almost all the time. The goal is to increase the likelihood that some ant will be close enough to encounter whatever happens to show up.
One strategy ants use (familiar from our own data networks) is to set up a circuit of permanent highways — like a network of cell phone towers — from which ants search locally. The invasive Argentine ants are experts at this; they’ll find any crumb that lands on your kitchen counter.
The Argentine ants also adjust their paths, shifting from a close to random walk when there are lots of ants around, leading each ant to search thoroughly in a small area, to a straighter path when there are few ants around, thus allowing the whole group to cover more ground.
Like a distributed demand-response network, the aggregated responses of each ant to local conditions generates the outcome for the whole system, without any centralized direction or control.
In the face of scarcity, the algorithm that regulates the flow of ants is evolving toward minimizing operating costs rather than immediate accumulation.
Addressing Security Breaches and Disasters
In the tropics, where hundreds of ant species are packed close together and competing for resources, colonies must deal with security problems. This has led to the evolution of security protocols that use local information for intrusion detection and for response.
One colony might use (“borrow” or “steal”, as humans would say) information from another, such as chemical trails or the density of ants, to find and use resources.
Rather than attempting to prevent incursions completely, however, ants create loose, stochastic identity systems in which one species regulates its behavior in response to the level of incursion from another.

There are obvious parallels with computer security. It’s becoming clear (consider recent events!) that we too will need to implement local evaluation and repair of intrusions, tolerating some level of imperfection. The ants have found ways to let their systems respond to each others’ incursions, without attempting to set up a central authority that regulates hacks.

Ants have evolved security protocols that use local information for intrusion detection and response.
Some of our networks seem to be moving toward using methods deployed by the ants.
Take the disaster recovery protocols of ants that forage in trees where branches can break, so the threat of rupture is high. A ring network, with signals or ants flowing in both directions, allows for rapid recovery here; after a break in the flow in one direction, the flow in the other direction can re-establish a link.
Similarly, early fiber-optic cable networks were often disrupted by farm machinery and other digging: one break could bring down the system because it would isolate every load. Engineers soon discovered, as ants have already done, that ring networks would create networks that are easier to repair.
***
Our networks will continue to change and evolve. By examining and comparing the algorithms used by ants in the desert, in the tropical forest, and the invasive species that visit our kitchens, it’s already obvious that the ants have come up with new solutions that can teach us something about how we should engineer our systems.
Using simple interactions like the brief touch of antennae — not unlike our fleeting status updates in ephemeral social networks — colonies make networks that respond to a world that constantly changes, with resources that show up in patches and then disappear. These networks are easy to repair and can grow or shrink.
Ant colonies have been used throughout history as models of industry, obedience, and wisdom. Although the ants themselves can be indolent, inconsiderate of others, and downright stupid, we have much to learn from ant colony protocols. The ants have evolved ways of working together that we haven’t yet dreamed of.