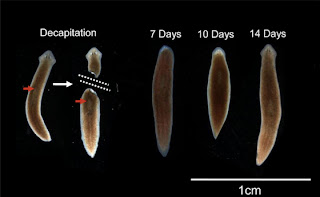 This is actually a huge breakthrough in our perceptions of memory and our nervous system.

Why should our memories be stored solely in our specialized brain?  In theory they could be stuck throughout your body in any cell of choice to be accessed as needed.  What we have failed to grasp is that our opinion was merely a reasonable assumption that did not have to be true.

In this case, the organism regrew its processing center and then was able to recover information distributed throughout the rest of the body.

It is even plausible that the body stores information as very long term backup in the event of catastrophic loss.

Again, this is much unexpected and gives new meaning to the ideas of chakras.  By the way, if your body clearly remembers a state of health, can memory restoration lead to health restoration?

Worms regrow their decapitated heads, along with the memories inside

Some memories just won't die — and some can even be transferred to a whole new brain. Researchers at Tufts University have determined that a small, yellow worm known as a planarian, which has long been studied for its regenerative properties, is able to grow back a lot more than just its body parts: after the worm's small, snake-like head and neck are removed, its body will even regrow a brain that's capable of quickly relearning its lost skills.

The researchers tested the memory of planarians by measuring how long it took for them to reach food in a controlled setting. The small worms dislike open spaces and bright lights — but they had been trained to ignore it so that they could find their meals. Even after decapitation, worms that had gone through training were able to overcome their fears and start eating much faster than worms that hadn't been trained. However, the memories didn't come back immediately. Each worm still had to be reminded of its earlier knowledge, though it only took a single lesson for it to all come back.

The researchers' findings appears in The Journal of Experimental Biology. They say that more work needs to be done to nail down the specifics of how planarians recover their memory, but the hope is that the worms can be used as a way to study how memory and learning work. That may sound complicated for a seemingly basic creature, but existing studies are already using them to research drug addiction and withdrawal.
Posted by arclein at 12:00 AM