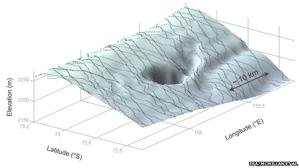 This is actually somewhat confounding and teaches us that this type of activity is profoundly ongoing throughout the life of an Ice Age event.  Imagine what this does to the underlying ground surface.  The take home is that glaciation is profoundly complex and powerful and utterly unpredictable over any significant time scale.

Imagine trying to explain the end results later.  You end up not trusting gravity.

This is a new unusual observation and is well noted

Picturing Antarctica might call to mind snow being blown across plains of ice by the driving wind, where he only weather phenomenon of note is a blizzard. So it might be a little surprising to learn that, even with year-round ice and snow, they have floods there, too. They're just underground, or more accurately, under ice.

Scientists analyzing data from two satellites that monitor the frozen continent — the now-decommissioned US Icesat and a newcomer from Europe, Cryosat — have discovered evidence of a recent sub-glacial flood so large it changed the landscape of the 2.7 km-thick ice sheet above it.
The satellite data revealed that the ice sheet slumped to fill a new crater beneath it during 2007 and 2008, as water rushed out of what had been Sub-Glacial Lake Cook. So much water emptied out of the lake — an estimated six billion tonnes — that the ice drooped into a hole roughly the same size as the city of Halifax, NS.

"The crater's a big feature," said Dr. Malcolm McMillan, a polar researcher at the University of Leeds, according to BBC News. "It covers an area of about 260 square kilometres ... and was as much as 70m deep."

Antarctica losing mass to melting isn't unusual. The icy contient is currently melting ice and snow that it doesn't build back up over the winter at a rate of 50 to 100 billion tonnes per year. What is unusual is for so much to seep out at one time. SGL Cook by itself accounts for about 10 per cent of the annual loss.

So where does the water go when it runs off? There are a few possibilities that the researchers are exploring. After this runoff event, there was a buildup of ice downstream, which seems to suggest the water didn't immediately run into the ocean. There's a surprisingly extensive network of waterways under the ice, and that means the water could end up back in SGL Cook again, or refreeze to the underside of the ice sheet, or enter another waterway altogether.

At the moment, it seems as though Cook is being replenished to some degree, and when it over-tops again, the lake water will have another shot at running all the way to the coast. Adding more water to the ocean doesn't sound like a big deal; the ocean seems like a good place to put water, doesn't it? Well, maybe not as much as we'd like to think.

By this point, everyone is familiar with the concept of rising sea levels associated with climate change, and many of us are aware of the threat that poses to islands and coastal regions around the world.

But melt water from glaciers poses another potential threat that's less straightforward and, unfortunately, not nearly as well understood. The water that melts off of Antarctica and from other glaciers is fresh water. Apart from making it taste bad, the salinity of the oceans helps drive the 'thermohaline circulation' — the large ocean water heat and energy conveyor belts that play a major role in regulating our climate. The famousGulf Stream is part of this system. The circulation relies on the oceans maintaining a certain percentage salinity; we know saltier or fresher water throws a wrench in the works, although just how sensitive the system is remains a bit of a question mark.

That said, dumping fresh water into the ocean in massive amounts is a suspect in a variety of historical climate changes, such as the Younger Dryas event — between 11,500 and 12,800 years ago — that is blamed for the decline of the Clovis Culture in North America.

When you consider that there are about 400 of these sub-glacial lakes, it certainly seems wise to investigate how many of them might be spilling this kind of water into the ocean each year. It's also important to understand how the underground water supply impacts the motion of the ice sheets themselves — something else that we will have to consider as the world around us continues to warm.