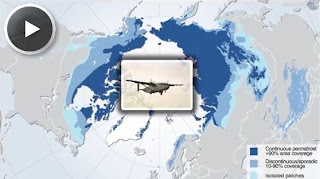 This is an interesting question. Just how stable is the permafrost. Particularly as it could actually be a remnant of the Ice Age itself. It may still be in the long process of simply disappearing by cycling back and forth over centuries.

In the event, it nicely explains the long release of CO2 in the post Ice Age geological record that has been observed over millions of years. This release cycle typically last over several centuries.

For the present, warmer Arctic summers appear to be nicely causing the permafrost to contract modestly.

Is Arctic Permafrost the "Sleeping Giant" of Climate Change?

June 24, 2013: Flying low and slow above the pristine terrain of Alaska's North Slope research scientist Charles Miller of NASA's Jet Propulsion Laboratory surveys the white expanse of tundra and permafrost below. On the horizon, a long, dark line appears. His plane draws nearer, and the mysterious object reveals itself to be a massive herd of migrating caribou, stretching for miles.
It's a sight Miller won't soon forget.

"Seeing those caribou marching single-file across the tundra puts what we're doing here in the Arctic into perspective," says Miller, who is on five-year mission named “CARVE” to study how climate change is affecting the Arctic's carbon cycle.

A new ScienceCast video peeks beneath the topsoil to inspect the carbon stores of Arctic permafrost.Play it

CARVE is short for the “Carbon in Arctic Reservoirs Vulnerability Experiment.”  Now in its third year, the airborne campaign is testing the hypothesis that Arctic carbon reservoirs are vulnerable to warming, while delivering the first source-maps of greenhouse gases carbon dioxide and methane. About two dozen scientists from 12 institutions are participating.

"The Arctic is critical to understanding global climate," says Miller. "Climate change is already happening in the Arctic, faster than its ecosystems can adapt. Looking at the Arctic is like looking at the canary in the coal mine for the entire Earth system."

Over hundreds of millennia, Arctic permafrost soils have accumulated vast stores of organic carbon - an estimated 1,400 to 1,850 billion metric tons of it.  That's about half of all the estimated organic carbon stored in Earth's soils. In comparison, about 350 billion metric tons of carbon have been emitted from all fossil-fuel combustion and human activities since 1850. Most of the Arctic’s sequestered carbon is located in thaw-vulnerable topsoils within 3 meters of the surface.

But, as scientists are learning, permafrost - and its stored carbon - may not be as permanent as its name implies. And that has them concerned.

"Permafrost soils are warming even faster than Arctic air temperatures - as much as 1.5 to 2.5 degrees Celsius in just the past 30 years," says Miller. "As heat from Earth's surface penetrates into permafrost, it threatens to mobilize these organic carbon reservoirs and release them into the atmosphere as carbon dioxide and methane, upsetting the Arctic's carbon balance and greatly exacerbating global warming."

CARVE campaign flights are conducted aboard a specially instrumented NASA C-23 Sherpa aircraft from NASA's Wallops Flight Facility on Wallops Island in Virginia. The C-23 won't win any beauty contests - its pilots refer to it as "a UPS truck with a bad nose job." Inside, it's extremely noisy - the pilots and crew wear noise-cancelling headphones to communicate. "When you take the headphones off, it's like being at a NASCAR race," Miller quipped.

But what the C-23 lacks in beauty and quiet, it makes up for in reliability and its ability to fly "down in the mud."  Most of the time, it flies about 150 meters above ground level, with periodic ascents to higher altitudes to collect background data. Onboard the plane, sophisticated instruments sniff the atmosphere for greenhouse gases.  "[We] need to fly very close to the surface in the Arctic to capture the interesting exchanges of carbon taking place between Earth's surface and atmosphere," Miller says.

The CARVE team flew test flights in 2011 and science flights in 2012. So far in 2013 they have completed three monthly campaigns--in April, May and June--with four more to go.

From a base in Fairbanks, Alaska, the C-23 flies up to eight hours a day to sites on Alaska's North Slope, interior and Yukon River Valley over tundra, permafrost, boreal forests, peatlands and wetlands.
Soaring over the Arctic terrain, Miller has seen many things he won’t forget.  The permafrost data may prove unforgettable, too.