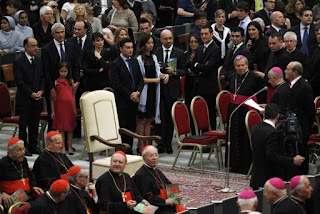 What is so clear and should have been from the instance he chose the name of Francis, is that this Pope abhors pomp and circumstance. This little vignette shows us that some must learn this the hard way. Even better he is establishing a collegial aura in the Vatican that is long overdue. I would be really impressed if he resurrected the Rule of Twelve.

There are many who wish to dismiss the Papacy as somehow unimportant or some such canard, though that became shockingly wrong headed with the reign of John Paul II. Yet rejectionism is still fashionable. We forget just how St Francis, single handedly revitalized the Catholic Church one thousand years ago. That this is the first Pope to choose to follow in his footsteps tells just how difficult the challenge is. You now know his secret agenda. You also have to understand that his success will utterly change the whole world.

If you are a believer, pray for his success because it will be everyman's success. If not, understand what is possible and wonder.

VATICAN CITY (Reuters) - A last-minute no-show by Pope Francis at a concert where he was to have been the guest of honor has sent another clear signal that he is going to do things his way and does not like the Vatican high life.

The gala classical concert on Saturday was scheduled before his election in March. But the white papal armchair set up in the presumption that he would be there remained empty.

Minutes before the concert was due to start, an archbishop told the crowd of cardinals and Italian dignitaries that an "urgent commitment that cannot be postponed" would prevent Francis from attending.

The prelates, assured that health was not the reason for the no-show, looked disoriented, realizing that the message he wanted to send was that, with the Church in crisis, he - and perhaps they - had too much pastoral work to do to attend social events.

"In Argentina, they probably knew not to arrange social events like concerts for him because he probably wouldn't go," said the source, who spoke anonymously because he is not authorized to discuss the issue.

The picture of the empty chair was used in many Italian papers, with Monday's Corriere della Sera newspaper calling his decision "a show of force" to illustrate the simple style he wants Church officials to embrace.

Since his election on March 13, Francis, the former cardinal Jorge Bergoglio of Argentina, has not spent a single night in the opulent and spacious papal apartments.

He has preferred to live in a small suite in a busy Vatican guest house, where he takes most meals in a communal dining room and says Mass every morning in the house chapel rather than the private papal chapel in the Apostolic Palace.

The day before the concert, Francis said bishops should be "close to the people" and not have "the mentality of a prince".

On Saturday, while the concert was in progress in an auditorium just meters (yards) away, Francis was believed to be working on new appointments for the Curia, the Vatican's troubled central administration.

The administration was held responsible for some of the mishaps and scandals that plagued the eight-year reign of Pope Benedict before he resigned in February.

Francis inherited a Church struggling to deal with priests' sexual abuse of children, the alleged corruption and infighting in the Curia, and conflict over the running of the Vatican's scandal-ridden bank.

Benedict left a secret report for Francis on the problems in the administration, which came to light when sensitive documents were stolen from the pope's desk and leaked by his butler in what became known as the "Vatileaks" scandal.

The Vatican source said he expected Francis to make major changes to Curia personnel by the end of the summer.

Anger at the mostly Italian prelates who run the Curia was one of the reasons why cardinals chose the first non-European pope for 1,300 years.

The key appointment will be the next secretary of state, sometimes referred to as the Vatican's prime minister, to succeed the Italian Cardinal Tarcisio Bertone, who has been widely blamed for the failings of the Curia.