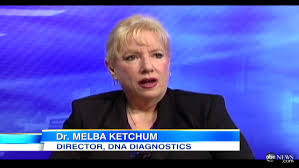 Nice headline but he was fed one sample out of a great many independent samples and it may well be that he was the one been tested. I would never release a quality ore sample to any third party without putting that person under contract and policing the use of the information. What is more, I would insist that their work be publishable with their name attached.

So our boy has been engaged and did he return to Ketcham and share his findings? Of course not, he had his cheap story and headline.

At the same time the report that was returned states opossum and other. Precisely what is 'other' in the exact science of DNA? In geology it usually means that I am too lazy to crawl three hundred feet down a cliff face to sample the rock. With DNA, it is unidentified. And just how did this lab work compare to Ketchum's work?

Perhaps I should put this under a headline like World Famous Journalist Searching for Bigfoot.

I had the ‘Bigfoot DNA’ tested in a highly reputable lab. Here’s what I found.


Back in February I savaged the release of a research paper that claimed to prove the existence of Bigfoot by providing a DNA sequence from the species.

The paper contained details of DNA from the “Sasquatch genomes,” which the authors characterized as novel and non-human.

Following the paper’s publication I solicited the views of several geneticists on the work. From their reading of the scientific paper — published in a journal that had been started just the week before — they said at best the evidence was inconclusive.

In summarizing my views of the work, led by Nacogdoches geneticist Melba Ketchum, I was blunt and brutal:


If Ketchum really had the goods she would have co-authored the paper with reputable scientists and gotten the work published in a reputable scientific journal. Instead she’s playing to an audience that doesn’t understand how science works, that wants to believe Bigfoot exists and is willing to send her some cash to further their delusions.

A funny thing happened later that week — Ketchum called me. We spoke for nearly an hour, and after the bad things I had written about her research, I was impressed that she bore no grudge and wanted to nonetheless engage with me. It was a good and constructive conversation.

I am first and foremost a journalist, and I figured if there was even a 1 percent chance that the Bigfoot evidence was real, it was worth my time to check the story out.

So I agreed to be an intermediary between Ketchum and a highly reputable geneticist in Texas, whom I trusted and knew personally. I also knew that this geneticist was first and foremost a scientist, and if there was even a 1 percent chance the Bigfoot evidence was real, he’d want check out the story. I asked, and he was willing to approach the evidence with an open mind.

(Why am I maintaining my source’s anonymity? Because some of his peers would question his engagement on such a topic, believing it unworthy of valuable research time. But make no mistake, he is a top-notch scientist at the top of his field.)

The deal was this: I would hold off writing anything until this geneticist had his lab test the DNA samples obtained by Ketchum that were purportedly a novel and non-human species. If the evidence backed up Ketchum’s claims, I had a blockbuster story. My geneticist source would have a hand in making the scientific discovery of the decade, or perhaps the century. Ketchum would be vindicated.

In short, we would all have been winners.

Alas, I met my geneticist friend this past week and I asked about the Bigfoot DNA. It was, he told me, a mix of opossum and other species. No find of the century.

I’m honestly really disappointed. A world with Bigfoot would be a little softer. A little more fun. But in my world science is the arbiter of reality.