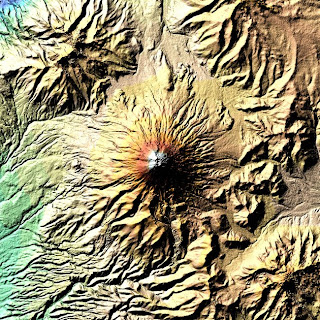 The linkage between earthquakes and apparent resultant volcanic activity has always been inferred and generally accepted. However, today we have a smoking gun to make thing completely certain. The quake and the actual vertical drop in the volcanic chain turn out to be effectively simultaneous.

Thus we can be certain that Earthquakes do trigger the pent up subsidence of volcanic buildups as a matter of course and can be predicted.

In fact volcano prediction modeling for most can be predicated to triggering quake likelihood. Actual stand alone events are what we know and anticipate but adjacent active faults can trigger a far more extensive era of volcanism and may explain certain anomalies in the geological record.

The massive earthquakes that struck Japan and Chile in 2011 and 2010, respectively, sank several big volcanoes by up to 6 inches (15 centimeters), two new studies report.

This is the first time scientists have seen a string of volcanoes drop after an earthquake. Even though the mountains are on opposite sides of the Pacific Ocean, their descents look remarkably similar. The two teams have different explanations for why the volcanoes sank, according to the studies, published today (June 30) in the journal Nature Geoscience. However, both groups agree it's likely scientists will discover more examples of drooping volcanoes after big earthquakes, and find a single mechanism that controls the process.

"It's amazing, the parallels between them," said Matthew Pritchard, a geophysicist at Cornell University in Ithaca, N.Y., and lead author of one of the studies. "I think it makes a really strong case that this is a ubiquitous process."

Researchers as far back as Charles Darwin have noticed that volcanoes sometimes blow their top after earthquakes. And colossal earthquakes, such as the magnitude-9.0 2011 Japan earthquake and the magnitude-8.8 2010 Chile temblor, can trigger small tremors at volcanoes thousands of miles away. But pinning down a direct link between earthquakes and eruptions has eluded scientists.

After the Chile and Japan quakes, the research teams behind the two new studies (each group working independently), set out to track signs of coming eruptions. But instead of finding bulgingvolcanoes — a hint that magma is rising underground — the teams only discovered sagging mountains, or no changes at all. No signs of eruptions appeared in the scores of volcanoes in the two countries.

Instead, volcanoes and massive caldera complexes similar to those at Yellowstone National Park — areas as large as 9 by 18 miles (15 by 30 kilometers) — dropped by 2 to 6 inches (5 to 15 cm). Each area was shaped like a long oval, lined up parallel to the offshore earthquake fault that was located between 200 to 300 km (about 125 to 185 miles ) away. Satellite data revealed the changes to both teams.

"Even without visible eruptions, large earthquakes affect volcanoes," Youichiro Takada, a geophysicist at Kyoto University in Japan and lead author of one of the studies, said in an email interview.

Pritchard and his colleagues, who studied the Chilean earthquake, think the seismic shaking uncorked fissures and fractures that released pent-up hydrothermal fluids at the volcanoes, akin to shaking a soda bottle and then opening the top. As the fluids escaped, the ground settled and sank.

But Takada's group, who studied the Japan quake, thinks magma chambers under the volcanoes sank more than the surrounding region. The hot rock is weaker and deforms more in response to the crustal changes caused by the massive quake.

Their data, which is more precisely timed than the Chile group's thanks to Japan's dense GPS monitoring network, also shows the volcanoes dropped as soon as the earthquake struck.

Further work will tell which model is right, or even if they're both wrong, said Sigurjon Jonsson, a geophysicist at the King Abdullah University of Science and Technology in Saudi Arabia who was not involved in the study.

"The observations in Japan and Chile are so similar that I'm certain that they are caused by the same mechanism (and maybe more than one), instead of two different ones in the two different countries," Jonsson said in an email interview.

Both teams plan to comb through the satellite record for evidence of past sinking after earthquakes of varying sizes, and watch volcanoes during future quakes and catch any changes.

The studies also offer further evidence of why some earthquakes trigger eruptions and some don't, Pritchard said.

"Basically, the volcanic system has to be primed and ready to go for the earthquake to tip it over the edge," Pritchard said. "If, by chance, no volcanoes are close to that point, no volcanic eruptions are triggered [after an earthquake]," he said.