The Crime of Alleviating Poverty 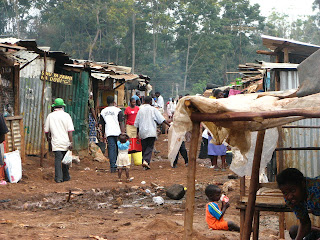 As usual the king chokes when the people decide to apply the privilege of creating money and credit. In this case there is now enough precedent around the world to win through. Better, it is also part of a global monetarization of the poor that continues to gather momentum.

We have posted many times already on validity of pushing the power of credit creation downstream to the communities. Here we have clear working field demonstrations as will as a range of governance options been experimented with.

In fact sheer success of both this and microlending is spreading rapidly throughout the poor and establishing wealth in the economic base which will naturally eliminate poverty. Sporadic ill considered resistance is no surprise but it is been overcome.

The Crime of Alleviating Poverty: A Local Community Currency Battles the Central Bank of Kenya

Former Peace Corps volunteer Will Ruddick and several residents of Bangladesh, Kenya, face a potential seven years in prison after developing a cost-effective way to alleviate poverty in Africa’s poorest slums.  Their solution: a complementary currency issued and backed by the local community.  The Central Bank of Kenya has now initiated charges of forgery.

Proving that may be difficult in complex economies, due to the high number of factors influencing outcomes. But in an African slum with little of the national currency available, supplying residents with an alternative currency has a positive effect that is obvious, immediate and incontrovertible.

This was demonstrated when Will Ruddick, an American physicist, economist and former Peace Corps volunteer, introduced a complementary currency into a Kenyan slum called Bangladesh, near the coastal city of Mombasa. Will’s local development organization, Koru-Kenya, worked with over one hundred small business owners in Bangladesh, who agreed to give each other the equivalent of 400 shillings (about €3.5 or $4.60) in mutual credit in the form of business vouchers called Bangla-Pesa. Half of the vouchers would be available for spending on each others’ products and services, and half would be spent into the community on public projects such as waste collection and health services. Allocation decisions were democratic and transparent, and the new currency was backed entirely by the community’s own resources and insured by a system of group guarantors, not by the Kenyan government or a development agency.

The project was launched on May 11, 2013.  The immediate effect was an increase in sales of 22%. That meant increasing incomes and purchasing power by 22%.  These exchanges were of goods and services that without the additional currency would have been thrown away or gone to waste, not because they were unmarketable but because potential customers did not have the money to buy them.  Introducing Bangla-Pesa worked to move the economy forward at full capacity, connecting the community to its own resources when the only things lacking were those slips of paper called “money.” A compelling video on the project is here.

The successful Kenyan experiment quickly earned endorsements from the United Nations, The Hague and  the International Reciprocal Trade Association. Indeed, no other poverty alleviation or local governance program can compete with the cost-effectiveness of this approach, which is easily replicable in poor communities across Africa. The plan was to expand it to other villages in a democratic grassroots fashion so that it could provide a local medium of exchange for people throughout the continent. This would be done via mobile phones with a system provided byCommunity Forge, an organization based in Geneva that supports the development of community currencies worldwide.

But that plan was unexpectedly interrupted on May 29th, when Will and five other project participants were arrested by Kenyan police and thrown in jail. Besides Will, who is married to a Kenyan aid worker and is a new father, the others include local community business owners who are parents and grandpa

The police at first accused the group of plotting a terrorist overthrow of the government, claiming that Bangla-Pesa was linked to the MRC, a terrorist secessionist group. When that link was easily disproven, the Central Bank of Kenya was called in and charges of forgery were formally placed. Will and his fellow suspects have been released for now on a bail of EUR 5,000 and await trial on July 17th. If convicted, they face seven years in a Kenyan prison.

Despite these perilous circumstances, Will remains optimistic. “The exciting thing,” he says, “is that these systems really do show a means of poverty reduction – and my hope is that after this case we’ll be allowed to spread them to slums across Kenya. There have been years of precedent for Complementary Currencies as a solution to poverty, and today there is no doubting it.”
Successful Precedents from Switzerland to Brazil


Complementary currencies are endorsed by many governments worldwide. The oldest and largest is the WIR system in Switzerland, an exchange system  among 60,000 businesses – a full 20% of all Swiss businesses. This currency has been demonstrated to have a counter-cyclical effect, helping to stabilize the Swiss economy by providing additional liquidity and lending capacity when conventional credit for small businesses is scarce.


Brazil is a global leader in using the complementary currency approach for poverty alleviation. Interestingly, its experience began in much the same way as Kenya’s: Brazil’s most successful community currency, called “Palmas”, was nearly strangled at birth by the Brazilian Central Bank. How it went from criminal suspect to official state policy is told by Margrit Kennedy and co-authors in People Money:


After issuing the first Palmas currency in 2003, local organiser Joaquim Melo was arrested on suspicion of running a money laundering operation in an unregistered bank.  The Central Bank started proceedings against him, saying that the bank was issuing false money.  The defendants called on expert witnesses, including the Dutch development organisation Stro, to support their case. Finally, the judge agreed that it was a constitutional right of people to have access to finance and that the Central Bank was doing nothing for the poor areas benefiting from the local currencies. He ruled in favour of Banco Palmas.

What happens next shows the power of dialogue.  The Central Bank created a reflection group and invited Joaquim to join in a conversation about how to help poor people. Banco Palmas started the Palmas Institute to share its methodology with other communities and, in 2005, the government’s secretary for “solidarity economy” created a partnership with the Institute to finance dissemination.  Support for community development banks issuing new currency is now state policy.

If the Kenyan court follows the example of Brazil, this could be the beginning of a promising new approach to poverty reduction in Africa. The Bangla-Pesa is backed by local resources, and the villagers were very happy to have it in order to move their products and buy the surplus of others within their community.

Viewed as a case of counterfeiting, however, there is historical precedent for harsh punishment. In the mid-eighteenth century, when the Bank of England was privately owned and had the exclusive right to issue the national currency, counterfeiting Bank of England Notes was made a crime punishable by death. That was the era of Charles Dickens’ Tale of Two Cities and Bleak House, when supplementing the national currency might have helped relieve mass poverty; but it was in the interest of the Bank to control the market for currency and keep it scarce, in order to ensure a steady demand for loans.  When there is insufficient money in the system to cover the needs of exchange, people must borrow from banks at interest, ensuring the banks a handsome profit.

The converse is also true: when sufficient money is supplied to cover the needs of exchange, debt levels and poverty are dramatically reduced.

In this case, the physical Bangla-Pesa voucher looks nothing like the national currency, as it would need to in order to sustain a charge of forgery. The intent of complementary currencies, as their name implies, is not to imitate or compete with the national currency but to complement it, allowing for increased sales within the local community of existing goods and services that would otherwise go unsold. Today, the Bank of England itself acknowledges this role of complementary currencies.

The Bangla-Pesa experience demonstrates what policymakers often overlook: gross domestic product is measured in goods and services sold, not goods and services produced; and for goods to be sold, purchasers must have the money to buy them. Provide consumers with excess money to spend, and GDP will go up.  (In Kenya, where nearly half the population lives in poverty and mass unemployment, increases in GDP reflect extractive practices rather than local conditions.)

The common perception is that increasing the medium of exchange will merely devalue the currency and increase prices, but the data show that this does not happen so long as merchandise and services remain unsold or workers remain unemployed. Adding liquidity in those circumstances drives up sales, productivity and employment rather than prices.

This was demonstrated in a larger experiment in Argentina, when the country suffered a major banking crisis in 1995.  Lack of confidence in the peso and capital flight ended in a full-scale run on the banks, which closed their doors. When the national currency became unavailable, peopleresponded by creating their own. Community currencies at the local level evolved into the Global Exchange Network (Red Global de Trueque or RGT), which went on to become the largest national community currency network in the world.  The model spread throughout Central and South America, growing to seven million members and a circulation valued at millions of U.S. dollars per year. At the local government level, provinces short of the national currency also resorted to issuing their own money, paying their employees with paper receipts called “Debt-Cancelling Bonds” that were in currency units equivalent to the Argentine Peso.

Although these various measures increased the currency in circulation, prices did not inflate.  To the contrary, studies found that in provinces in which the national money supply was supplemented with local currencies, prices actually declined compared to other Argentine provinces.  Local exchange systems allowed goods and services to be traded that would not otherwise have found a market.

This salutary effect was also observed in Bangladesh. “With Bangla-Pesa,” says Ruddick, “we’ve seen that a circulating community-backed interest-free credit is a low-cost, effective way to increase local liquidity and decrease poverty.”

The defendants just need to prove that in court. A crowd-funding campaign is being used to raise the money urgently needed for their defense. The link for contributions is here. To sign a petition begun by a delegation at The Hague supporting the Bangla-Pesa, click here.
Jamie Brown contributed to this article.


Ellen Brown is an attorney, president of the Public Banking Institute, and author of twelve books, including Web of Debt and the recently-published sequel The Public Bank Solution. Her websites are
http://WebofDebt.com, http://PublicBankSolution.com, and http://PublicBankingInstitute.org.