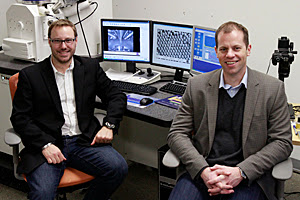 This is actually early days in this research and the method described is certainly promising.  No clue here though as to how promising yet.  It may well solve the hydrogen production cost problem with water and that is certainly beneficial.

Hydrogen is still not the most convenient fuel to work with because it difficult to contain although it can be done.  The reason natural gas is so convenient is that it can be shipped.  In fact, it happens to be a great retainer of hydrogen.

However, we certainly need this if we can get the performance needed.

A new discovery by a pair of University of Calgary chemists could make the large-scale use of wind and solar energy more feasible.

Curtis Berlinguette and Simon Trudel have invented an environmentally friendly, highly customizable way to make a key component in a process that stores electricity by turning water into hydrogen fuel — at a price they say is roughly 1,000 times cheaper than current methods for making that component.

They published their method this week online in the journal Science Express and are currently trying to commercialize it through a new spinoff company called Firewater Fuel Corp.

Wind and solar energy are considered clean, renewable sources of electricity, but they have a major drawback — the amount of power they generate at a given time depends on the amount of wind and sun at that moment. That doesn't necessarily correlate with the demand for electricity at a given time. Storing the power for later use is one way to address the mismatch.

Technically, electricity can already be stored cleanly by converting water into hydrogen and oxygen through a process called electrolysis, using a device called an electrolyzer. The stored chemical energy can be reconverted to electricity by recombining the hydrogen and oxygen in a fuel cell. It's a process similar to what happens in a battery and can be used in similar applications, including electric vehicles. However, hydrogen and water are cleaner storage materials than those used in batteries and fuel cells tend to be more efficient than batteries in a number of different ways.

Unfortunately, at a molecular level, breaking water down into oxygen and hydrogen is a "very complicated reaction" where many different things can happen over many steps, said Berlinguette. As a result, the reaction is normally too slow to be of practical use unless you compensate for the slow speed by adding extra electricity.

Brandt/University of Calgary)"If you don't have a catalyst, you'll probably need two or three times as much electricity as you should," Berlinguette said.

Obviously, that's not very efficient, green or practical. A special type of compound called a catalyst can speed the reaction up and greatly reduce the amount of extra energy needed. But up until now, water electrolysis catalysts have been made of crystals containing rare, expensive toxic metals such as ruthenium and iridium.

Berlinguette and Trudel have invented a way to make catalysts that perform just as well as those expensive catalysts but cost 1,000 times less. The new process also allows catalysts to be made from relatively non-toxic metal compounds such as iron oxide, better known as rust.
Infinite recipes

"Our method effectively translates to every metal in the periodic table," Berlinguette said.
And because the new process is much more customizable than existing methods for making this type of catalyst, the recipe can be tweaked to include any combination of metals in any proportions to get the best possible performance. That means it may be possible to find a recipe that far outperforms existing, expensive catalysts.

The new catalysts and the process to make them are completely different from existing water electrolysis catalysts because they weren't originally intended to be used as catalysts. Trudel was studying them because he was interested in their magnetic properties. One day, he happened to be hanging out after work with Berlinguette, who was researching a different kind of catalyst.

About 95 per cent of the hydrogen fuel in North America is produced from natural gas, according to the U.S. Department of Energy. Producing hydrogen from water is more expensive — according to the Florida Solar Energy Centre, it is roughly double the cost of hydrogen from natural gas when electricity is five cents per kilowatt hour. In Ontario, electricity ranges from 6.3 to 11.8 cents per kilowatt hour.

"Truthfully, we were just chatting over a beer and [I] said 'Why don't we take your materials and see if they work as catalysts?'" Berlinguette recalled. "And they worked."

Traditional methods for making water electrolysis catalysts involve sticking an electrode into a solution containing the metal, causing crystals called metal oxides to deposit on the electrode. Mixtures of different metals don’t work, Berlinguette said, because some of them deposit on the electrode more quickly than others, forming separate layers rather than a uniform mixture that would make for a useful mixed metal catalyst.

The new method involves putting the metals in a scaffold of light-sensitive, non-metallic, carbon-based molecules and dissolving them in a solution. Different metals can be dissolved in the same solution and mixed evenly. The electrode is dipped in the solution and the solvent is allowed to evaporate, causing the catalyst-containing molecules to stick to it. The researchers then shine a light on the electrode, breaking down the light-sensitive scaffold and leaving behind just the evenly distributed metal oxides.

These metal oxides aren't crystals like traditional electrolysis catalysts, but "amorphous" materials with a less organized structure and gaps called "defects." The researchers think that is what makes them more reactive and therefore better catalysts.
According to the University of Calgary, FireWater Fuel Corp. plans to have a commercial electrolyzer available by 2014 and a home version on the market a year later.