Historical Context For Garden of Eden 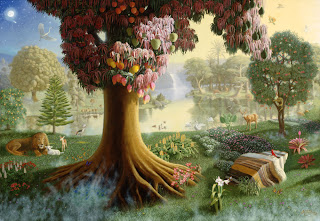 I want to revisit this excerpt from my recent post on Human Origins.  It gives us the clearest recovery on the internal meaning of the Garden of Eden paradigm, and a framework for understanding:

The Role of the Ubermind                 -           This has been discussed at length in this blog to the extent that it is a real physical reality rather analogous to a super internet and not a mystical GOD.  We will create it ourselves inside two generations.  This plausible creation tied to my extended conjecture that had already established modern man producing modernism around 40,000 years ago and no later is independently confirmed in this lucid dream.  Better yet, it was integral to the initial creation of modern humanity plausibly 200,000 years ago and their outward radiation.

The Garden of Eden Paradigm          -           Having the Ubermind on tap provided complete control of interspecies interaction and eliminated all threats.  This was paradise on Earth except they had zero motivation to strive at all.  Death meant little more than stepping back into the bosom of the Ubermind until the next trip out.

The Introduction of Murder and Fear          -           Loss of the Ubermind, not unexpectantly led immediately to the reality of fear and inevitably our first experience of murder.

Adam and Eve are of course the embodiment of this first 150,000 years of human development and the sudden decanting into our present lifeway.  This makes it completely clear just what has been lost and plausibly can be recovered.

'Later, as I pondered on this, I was suddenly compelled into a lucid dream. I was having flash backs to a previous incarnation approximately 45,000 years ago where we, as Cro-Magnon men and women, walked the plains of a stunningly beautiful bygone continent – what one might describe as the “Garden of Eden”. It was a profoundly moving experience with the absolute feeling of joy and at-one-ment with all things. The river of Unity Consciousness flowed through my being and in my mind existed crystal clear clarity. There was a a depth of peace and stillness which surpassed any meditative experience I’ve since had.'

Then suddenly, the dream became a nightmare. Somehow fear had been induced within me and my awareness of the Universal Life Energy had vanished. It seemed I had been suddenly removed from my divine birthright. Whereas before there had been no fear whatsoever of death, now it seemed that danger lurked behind every boulder and I was deeply afraid. I was afraid for the safety of my partner, my children and myself, afraid of not finding food or safe shelter. It seemed I was afraid of my very own shadow. My body became tight and closed down as if my very life force was being drained from me. This was the experience I have come to know as “Homo Sapiens”.

Entwined in this profound metaphor which we now sense as properly understood for possibly the first time as an accurate historical representation, we also have the additional metaphor of Satan and the temptation of Eve causing the decision to cut off access to the Ubermind.

I suspect that mankind had successfully peopled the Earth but understood themselves as servants and not sharing directly with others as their equals.  The desire arose to actually evolve as a mature people and that was the temptation.  Once that decision was made, we were cut off and forced to master the Earth and commence terraforming Earth itself.  It already was our job at one level but to go to a higher level we had to develop ourselves.  From that point on we have been in charge.  From that day 45,000 years ago, modernism arose on the Continental Shelf for the first time by around 40,000 years ago.

From that we had the decision to shift the crust thirty degrees south through Hudson Bay around 13,000 years ago to end the Ice Age.  Once done, along with three thousand years of the geology settling down and all that ice melting, humanity established new agricultural colonies all over the globe to re - people the globe.

Luminous dreaming is becoming very important because unguessed conforming data is been introduced from the Ubermind that is totally unexpected and been shared.  Most important it is data without obvious known extant sources.  I suspect it to be a clear road by which the Ubermind can dump important information into the world for sharing and that is what is now happening.  This is a wild conjecture but I think that I will go with it and search for all references to lucid dreaming as they come in.  Time to revamp my Google alerts!

context
Posted by arclein at 12:00 AM