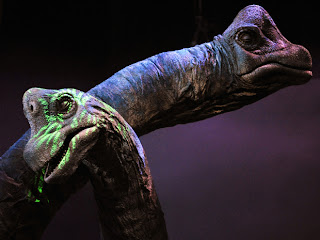 Alberta is of course, one of the most drilled places on earth. For that reason we have a detailed mapping of the original landforms. Thus it is possible to make these interpretations.

The apparent diversity strongly reminds me of general bird diversity in a plant species rich environment. That the herbivores did the same is a little unexpected only so much as we see little of that among the present population of herbivores. This may merely reflect the comparable youth of the mammalian lineage.

In any event it is certainly instructive regarding the march of the evolutionary imperative to penetrate of optimize prospective niches.

Two Canadian scientists who examined the fossilized skulls of 82 individual dinosaurs from ancient Alberta have gathered powerful new evidence about how such a startling variety of enormous, plant-eating species were able to survive in the same geographically restricted habitat about 75 million years ago.

It turns out that evolution produced a respectful sharing of limited resources among the huge vegetarian beasts that lived together there during the Late Cretaceous era, a time when much of today’s Western Canada was part of a narrow, swampy island continent — Laramidia — separated from the rest of the future Canada by a vast inland sea.

In a paper published Wednesday in the journal PLOS ONE, Canadian Museum of Nature and University of Calgary paleontologist Jordan Mallon and fellow U of C scientist Jason Anderson argue that subtle differences in the skulls of 16 species of big herbivorous dinosaurs show that they must have survived by “niche partitioning” — a delicate ecological balance in which each animal specialized in munching plants of certain types and heights to avoid competing directly with others for food.

“At any one time you can get six, seven or even eight of these giant herbivore species living together at once,” Mallon told Postmedia News. “The western continent, where all of these animals inhabited, was extremely narrow, and there just wasn’t very much space for them to live. So how do you support all that diversity, which we know existed, on such a small land mass?”

Paleontologists, he said, have been puzzling over the issue for a long time because there wouldn’t seem to have been enough plant resources to feed the large populations and multiple species of dinosaurs — including several horned, armoured and duck-billed varieties — known to exist at the same time and place.

“It’s a mystery that keeps rearing its head in the last 10 or 20 years,” added Mallon. “How do you support that many species? There’s nowhere on Earth today where we can see that many large herbivores living at the same time, coexisting.”

There were several possibilities, he said, including a theory that vegetation growth was so phenomenal in the dinosaur age that food supplies were essentially “unlimited.” Another theory suggested that the metabolism rates of the so-called “mega-herbivores” might have been so low that relatively little plant material was required to sustain their massive bodies.

But Mallon and Anderson reached a different conclusion based on skull differences among species that cohabited the Alberta portion of Laramidia between 76.5 million and 75 million years ago.

“We found pretty good evidence for niche partitioning in these animals,” Mallon said, noting that traits such as jaw structure, tooth shape, beak width and other characteristics point to significant specialization in terms of what types of plants different dinosaurs would have been eating, how low they were from the ground and the quality of nutrients they provided.

Analyzing the dinosaurs’ skull morphology allowed the researchers to “tease apart” details about the likely diets of different species and determine that they were probably “coexisting by specializing on different resources, divvying up the resources that way.”

The telltale differences, he said, could be seen even among different species within the same sub-groups of dinosaurs.

He compared the phenomenon to how the wide-muzzled white rhinoceros and its narrow-snouted cousin, the black rhino, feed on different types of plants in the same African ranges, thus avoiding a dietary overlap that would otherwise have them competing for the same limited, life-sustaining resources.

Mallon, who examined dinosaur fossils among research holdings in Ottawa, Toronto, Alberta, Chicago, New York and Britain, also said the study “really highlights the importance of fossil collections at museums” — particularly the maintenance of specimens stored on backroom shelves rather than on public display.

“Any one institution wouldn’t have done,” he noted, describing the challenge faced in amassing enough data to draw reliable conclusions. “I had to go everywhere.