Evolution of the Throw 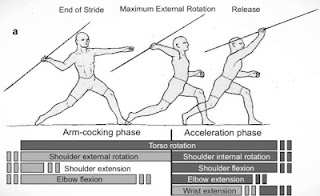 Skip the pointed stick theory. It is good but long before that it was a simple throwing stone well aimed. Even our Bigfoot cousin has been observed using that method. A pointed stick does need to be fire hardened and surely emerged with the general acceptance of fire. Yet the whole development to that point needed to be driven by need and accurate stone throwing is sufficient.
Throw in efficient running and a loss of a fur coat and we are well up to ourselves.
One of the earliest confirmation of stone throwing was a Saharan waterhole with curious disc shaped stones that were clearly out of geological context. It is not difficultt to understand the protocol and context.
It would also be an excellent way to discourage carnivores such as lions and way more effective than a hand-held spear which would surely only get them angry far too often. At a later era it was the thrown spear that allowed the hunters to force carnivores to stand off.

Ability to throw played a key role in human evolution

It's easy to marvel at the athleticism required to throw a 90-mile-per-hour fastball, but when Neil Roach watches baseball, he sees something else at work – evolution.

That ability – to throw an object with great speed and accuracy – is a uniquely human adaptation, one that Roach believes was crucial in our evolutionary past. How, when and why humans evolved the ability to throw so well is the subject of a study published today (June 26) in the journal Nature.


The study was led by Roach, who recently received his Ph.D. from Harvard's Graduate School of Arts and Sciences and is now a postdoctoral researcher at George Washington University, with Madhusudhan Venkadesan of NCBS at the Tata Institute of Fundamental Research, Michael Rainbow of the Spaulding National Running Center, and Daniel Lieberman, the Edwin M. Lerner II Professor of Biological Sciences at Harvard.


They found that a suite of changes to our shoulders and arms allowed early humans to more efficiently hunt by throwing projectiles, helping our ancestors become part-time carnivores and paving the way for a host of later adaptations, including increases in brain size and migration out of Africa.


"When we started this research, there were essentially two questions we asked – one of them was why are humans so uniquely good at throwing, while all other creatures including our chimpanzee cousins are not," said Roach. "The other question was: How do we do it? What is it about our body that enables this behavior, and can we identify those changes in the fossil record?"

What they found, Roach said, were a suite of physical changes - such as the lowering and widening of the shoulders, an expansion of the waist, and a twisting of the humerus – that make humans especially good at throwing.


While some of those changes occurred earlier during human evolution, Lieberman said it wasn't until the appearance of Homo erectus, approximately 2 million years ago, that they all appeared together. The same period is also marked by some of the earliest signs of effective hunting, suggesting that the ability to throw an object very fast and very accurately played a critical role in human's ability to rise to the top of the food chain.


"The ability to throw was one of a handful of changes that enabled us to become carnivores, which then triggered a host of changes that occurred later in our evolution," Lieberman said. "If we were not good at throwing and running and a few other things, we would not have been able to evolve our large brains, and all the cognitive abilities such as language that come with it. If it were not for our ability to throw, we would not be who we are today."

To start unpacking the evolutionary origins of throwing, Roach began not by studying how humans throw, but how our closest relatives – chimpanzees – do.

Though they're known to throw objects (often feces) underhand, chimps, on rare occasions, do throw overhand, but those throws are far less accurate and powerful than those of the average Little League pitcher, Roach said. Additionally, chimps throw as a part of display behavior and never when hunting.

Part of the reason for chimpanzee's poor throwing performance, Lieberman said, is tied to their technique, which in turn is limited by their anatomy. "Chimps throw overhand using either a dart throwing motion, where the elbow is extended, or much like a cricket bowler, where their elbow is kept straight and they generate force by swinging their shoulder", Lieberman said.

"That led us to studying cricket bowlers and trying to understand what happens when you keep your arm straight, and why that diminishes your throwing ability," Roach said. "Eventually, we began to think that changes in the way the shoulder is oriented with regards to the rest of the body could change the way you generate force when you're throwing."

To explore those physical changes, Roach and colleagues began by creating a complex model that incorporated current research about the biomechanics of throwing. Using that model, they were able to explore how morphological changes to the body – wider shoulders, arms that are higher or lower on the body, the ability to twist the upper body independently of the hips and legs, and the anatomy of the humerus – effect throwing performance.

In addition to the modeling, Roach performed a series of real-world experiments in Lieberman's Skeletal Biology Lab using members of the Harvard Baseball team and a host of braces designed to limit their movements.

The idea, Roach explained, was that by restricting certain motions, the players would be forced into a more primitive condition, giving him the opportunity to see how different anatomical shifts contribute to the mechanics of modern throwing.

Armed with a method known as inverse dynamics, Roach and colleagues were able to not only quantify how much restricting certain types of movements affected throwing performance, but were able to trace the effect to specific changes in the mechanics of each player.

"We try to push these bits of anatomy back in time, if you will, to see how that affects performance," Roach said. "The important thing about our experiments is that they went beyond just being able to measure how the restriction affects someone's ability to throw fast and accurately – they allowed us to to figure out the underlying physics. For example, when a thrower's velocity dropped by 10 percent, we could trace that change back to where it occurred."

"In order to test our evolutionary hypotheses, we needed to link the changes we'd seen in the fossil record to performance in terms of throwing," he continued. "This type of analysis allowed us to do that."

What they found were three key physical changes that helped to make fast, accurate throwing possible.

Evolutionary changes in the shoulder show that, as a pitcher cocks their arm back, "what they're doing is stretching the ligaments and tendons that run across their shoulder," Roach said. "Those tendons and ligaments get loaded up like the elastic bands on a slingshot, and late in the throw they release that energy rapidly and forcefully to rotate the upper arm with extraordinary speed and force." That rotation is the fastest motion the human body can produce. "The rotation of the humerus can reach up to 9,000 degrees-per-second, which generates an incredible amount of energy, causing you to rapidly extend your elbow, producing a very fast throw", Roach said.
Among the evolutionary changes that proved key to generating a powerful throwing motions, he said, was a twist in the bone of the upper arm and an expanded, mobile waist, which both gave early humans the ability to store up and then release more of this elastic energy


"The linchpin is really what's going on with the shoulder," Roach said. "When you see the shift from a chimpanzee shoulder to a more relaxed human-like shoulder, that enables this massive energy storage. Many of the evolutionary changes we studied, whether in the torso or the wrist, may predate Homo erectus, but when we see that final change in the shoulder, that's what brings it all together."


While the findings help shed light on a critical phase of human evolution, they also hint at a possible solution to a hotly debated question in sports: When it comes to young players, how much throwing is too much?


"It's a tough question to answer," Roach said. "The real difference, from an evolutionary perspective, is the frequency with which some folks throw now. To successfully learn to throw and use that ability to hunt, our ancestors would need to throw often, but nothing like the 100 or more high speed throws that some baseball pitchers throw now in the span of a couple of hours."


"I think it's really a case of what we evolved to do being superseded by what we're now asking athletes to do," he continued. "Athletes are overusing this capability that gave early humans an evolutionary advantage, and they're overusing it to the point that injuries are common."


Ultimately, Lieberman said, the evidence points to one clear conclusion – the ability to throw with speed and accuracy is a uniquely human adaptation, one that played an immeasurably important role in human development.

"That means that for about 1.5 million years, when people hunted, they basically had nothing more lethal to throw than a pointed wooden stick," he continued. "If you want to kill something with that, you have to be able to throw that pretty hard, and you have to be accurate. Imagine how important it must have been to our ancestors to throw hard and fast."
Posted by arclein at 12:00 AM