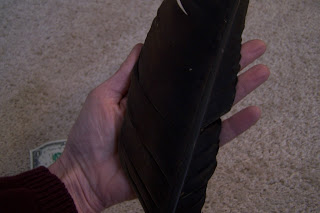 We have here yet another recent witness report on a huge bird by a qualified witness.  Rather importantly, it cleanly went to ground in heavy woodland.  This is as I posted its natural  refuge as it does not appear to be a visible high altitude soarer, but a ground skimming nocturnal hunter like a giant owl.

Thus the skirts of a large evergreen would provide perfect daytime cover and jack rabbits an excellent food source.

All observations have been of this type of low gliding behavior.  I suspect that a lot more exist than anyone ever imagined because they are well equipped to avoid us.


On May 17, 2013, the witness decided to do some fishing at Loyalhanna Lake in Derry Township. It was between 4 and 5 PM that afternoon that the man had packed up and was riding his motorcycle down the country road heading toward New Derry. He estimates that he was moving down the road at a speed of about 40 mph.


He was about 3-4 miles from the lake when his attention was drawn to a huge bird that crossed his path from left to right about 50 feet ahead of him. The huge flying creature was only about 8-10 feet above the road. The man, who was only able to observe it for several seconds, described it as very dark brown or black in color. The neck was short, and he didn’t get a good look at its head, but the body itself was very large and he noticed a huge tail.


What did catch his eye were the wings, and he stated to me, “the wingspan was gigantic.” He saw the bird flap its monstrous wings twice as it moved steadily toward a thickly wooded area to his right. The witness, who only saw the huge bird from a side view, estimated that the wingspan was about twenty feet or more in length.


The witness could not hear any sound due to the noise of his motorcycle engine. The witness is quite familiar with the common large birds of Pennsylvania. He said that he has never seen anything like this and is quite amazed at what he saw. The man reached the location where the bird had flown into the heavily wooded area in a matter of seconds, but he could not see the large flying creature at that point.

Hi. I've been searching for sightings of a bird that is similar to what I saw one day in Northern Alberta, Canada.

I was driving to High Level, Alberta and caught what I assumed, in my pariferal, was a large black dog sitting very upright in the ditch along a fence-line. I did a double take, as it stuck me as odd due to how far away from it's home it must be (about 3 miles on either side to the nearest home along the highway). My mind will never forget what I saw; standing there was a dark bird (mostly black) reaching a full 4 feet to the top of it's head. The silouette was of similar shape to a dog with it's ears laid back sniffing the air slightly. I am guessing it's weight to be 150 pounds or more.

The beak was dark grey if not black irodescent. The feathers on its head and mane were grey speckled almost like a young bald eagles would be.

If i had to hazard a guess, it's beak would have had to be 6 to 8 inches long and seemed hooked sharply at the tip more pronounced than an eagle's. So all in all, the head was at least as large as a big wolf's from crown to beak-tip.

For 15 years it has remained in my memory very clearly, and I haven't told many about it, maybe a handful of people including the chief of the Kanienkehaka (Mohawk) of New York and an elder of the Saddle Lake nation (Cree).

If anyone has had a similar sighting I would love to hear about it.