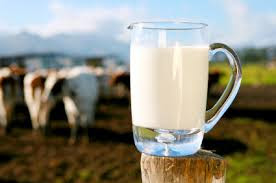 The fact is that raw milk is a living product that generally eliminates its own problems so long as it is not negligently overloaded. I suspect that pasteurization seriously weakens milk.

How this situation might be ultimately reversed remains to be seen although the rising strength of producer milk operations could do it.

This can lead to new distribution systems that help enhance human health. The advent of self driven vehicles could make this all practical as well as moving all fresh produce on a same day basis. After all, this is about assembling an order at a retail outlet and sending it on delivery with know booking times.

Imagine keying in an order of vegetables, dairy, and fresh meat, then having it immediately assembled and shown to you inside thirty minutes, then confirming the order, upon which it is put on a shuttle car and at your doorstep inside twenty minutes. That means it can all be done inside one hour.

Since this is a world in which cars remain active all day, no dedicated fleet is needed.

(NaturalNews) All of those antiquated government talking points about the alleged dangers of drinking raw milk have once again been debunked, this time by a series of scientific risk assessments recently published in the Journal of Food Protection. A press release published in the Wall Street Journal (WSJ) explains that, based on the results of three new quantitative microbial risk assessments (QMRAs), as well as the review of dozens of other scholarly papers on the subject, raw milk is very clearly a low-risk food that is generally safe for everyone, including pregnant women and young children.

Presented at a recent meeting of the Centre for Disease Control in Vancouver, B.C., Canada, the groundbreaking results of these QMRAs were offered up as some of the latest scientific evidence proving the safety of fresh milk during a presentation entitled Unpasteurized milk: myths and evidence. The main reviewer, Nadine Ijaz, M.S.c, divulged during this presentation how raw milk has been unfairly and wrongly categorized as a high-risk food since the 1930s when filthy, urban distillery dairies were churning out toxic "swill" milk that had to be pasteurized because it was causing people to become ill.

Distillery dairies were eventually decommissioned and replaced by real farm dairies, which eliminated virtually all the risks associated with raw milk, but the "science" behind milk pasteurization became crystallized into the American psyche thanks to tremendous pressures by many state departments of agriculture and the U.S. Food and Drug Administration (FDA). The FDA, as many Natural News readers are well aware, still clings to the outmoded theory that all milk has to be pasteurized in order to be considered safe.

But when it is produced safely in accordance with accepted sanitary standards, raw milk is not at all the villain that the government continually claims it is. In fact, raw milk is among the safest foods a person can eat, ranking higher than other common foods like processed lunch meat, factory-produced chicken eggs, and even conventional vegetables. It may come as a shock, but the latest research shows that leafy green vegetables actually carry with them a higher food safety risk than raw milk.


"While it is clear that there remains some appreciable risk of food-borne illness from raw milk consumption, public health bodies should now update their policies and informational materials to reflect the most high-quality evidence, which characterizes this risk as low," said Ijaz during the presentation. "Raw milk producers should continue to use rigorous managements practices to minimize any possible remaining risk."

Included within the peer-reviewed data sets that were used for the analyses was evidence showing that the pathogenic risk of raw milk is also particularly low. Contrary to popular belief, pathogens like Campylobacter, Shiga-toxin inducing E. coli, Listeria monocytogenes and Staphylococcus aureus are not very common in raw milk, and this is due to the fact that raw milk contains its own beneficial, probiotic pathogens that generally prevent them from forming.


"The scientific papers cited at the BC Centre for Disease Control presentation demonstrated a low risk of illness from unpasteurized milk consumption for each of the pathogens," explains a press release about the finding. "This low risk profile applied to healthy adults as well as members of immunologically-susceptible groups: Pregnant women, children and the elderly."


To learn more about the health benefits of raw milk, and where to find some in your area, visit:
http://www.realmilk.com/

Also, be sure to check out the comprehensive blog The Complete Patient, which contains all sorts of pertinent information about raw milk, health freedom, and the political structures that interfere with humanity's access to clean food:


http://thecompletepatient.com
Posted by arclein at 12:00 AM