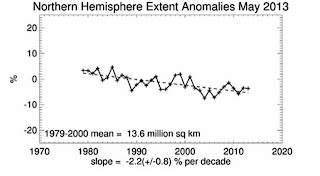 Like everyone, I was led to believe that the data began in 1979, and now we learn that it was selected in order to demonstrate the maximum possible slope. This is so in the face of sound practice, that the perp. should be tossed out on his butt.

The original easily supported a full melt by 2012 which we actually arrived at by which I mean that most multiyear ice had been destroyed. Yet, the strength of the slope did lead me to state publicly that that level would be reached by 2012. I was successful only because we caught a huge fortuitous change in the wind regime in 2007 that accelerated the effects. In short, I was right for the wrong reason.

As it was no one else came slightly close and once I predicted 2012, NASA quickly chimed in to say the same thing. You just know that some researcher had been muzzled until my news release allowed him to also come out.

The whole field of climate science has been treated to agenda driven data manipulation that would embarrass a first year student. Most of that has now waned fortunately thanks to the impact of disclosure and its obvious failure to predict anything.

In fact, my prediction, even based on fudged data won hands down although we could easily argue that with one good shot, you need only be right once by accident.

http://stevengoddard.wordpress.com/2013/06/15/ignoring-inconvenient-arctic-data/
NSIDC likes to pretend that there is no satellite data for Arctic ice prior to 1979.

This makes for scary graphs showing disappearing Arctic ice, which are highly misleading.
The 1990 IPCC report had satellite data going back much earlier than 1979, which showed that Arctic peaked in that year, and was much lower in 1974.

If NSIDC used all of the available data, their scary story wouldn’t look so scary. Starting their graphs during the peak ice year is pretty dodgy.