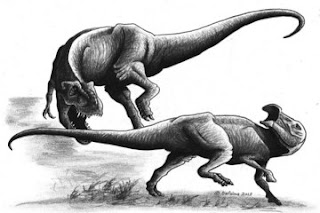 I do not think anyone had much doubt but the Theropods are essentially crocodiles adapted to sprinting or charging their prey.   Once you see them in that light, it can be no other way.  At the same time, their ability to shed heat was surely limited and this made them nocturnal hunters and baskers during the day.

It may well have also stayed close to water and likely failed to follow herds outright as today’s carnivores do.  I also suspect that they were an apex predator of crocodiles.  They are nicely engineered for just that.

In the meantime we have a fossil showing its ability to chomp on anything available.

It's Official: T. Rex Was Ferocious Predator, Not Scavenger

As most anyone who went through the "dinosaur phase" in childhood already guessed Tyrannosaurus rex was a fearsome predator.

The tooth was discovered in the tail of a hadrosaur that lived about 66 million years ago.

"It's the Holy Grail for a paleontologist," said study co-author David Burnham, a paleontologist at the University of Kansas. "Not only was the tooth broken off, but the tail had healed around it. That means that Tyrannosaurus rex attacked that other dinosaur." [Image Gallery: See the T. rex bite wound ]

The findings were published today (July 15) in the journal Proceedings of the National Academy of Sciences.

Although T. rex has been portrayed as the deadliest dino predator, the case for predation wasn't airtight. Even though stomach remains, a fearsome bite and body plan all suggested the imposing dinosaur attacked and ate other prey, some paleontologists proposed that T. rex was a scavenger, feasting on already dead animals but not killing its prey itself.

A few other herbivore fossils had been found with traces of T. rex bite wounds, but the evidence wasn't conclusive.

Burnham and his colleagues were excavating in the Hell Creek formation in South Dakota.

During the Cretaceous Period, the area was a vast network of forested rivers, and the formation now contains myriad fossils of dinosaurs and small mammals from the period.

'Beyond a reasonable doubt'

Lodged inside the vertebrae was part of a tooth, and the area around it showed signs of healing. When the team analyzed the serrations on the tooth, they confirmed it belonged to a T. rex.

"We were able to establish beyond a reasonable doubt that that is a T.rex tooth," Burnham told LiveScience.

The T. rex likely attacked the hadrosaur, but the herbivore was able to escape, Burnham said. The healing over the tooth indicates that the hadrosaur lived awhile after the attack.

The new findings prove that the iconic dinosaur preyed on hadrosaurs.

"This is the first time we have physical evidence, and without physical evidence for predation, people always said, 'Oh yeah, T.rex could have been a scavenger,'" Burnham said.
Posted by arclein at 12:00 AM