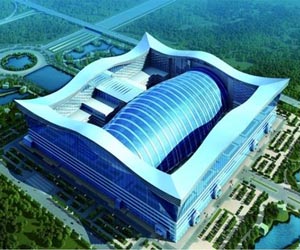 I actually like this design protocol for a couple of reasons. First the entire outside perimeter can be condominium frontage and the entire interior perimeter can also provide a frontage on the interior space and the internal climate. Second, the interior space is huge and can even contain condo tower type 'pillars' that provide hard points for an enclosing roof that could also be partially retractable as a possibly climate controlled space inside the structure that becomes a senior attraction in itself.

What this does allow is an underlying retail complex, along with ample destination hospitality venues and we get an all weather refugia for those who wish to escape the external climate.

Smaller structures simply do not work well enough for this concept to work. Such a large structure also needs to be linked directly into urban train system to move enough people easily.

Such structures could be well received in areas with difficult winters.


Boasting its own artificial sun and a floor area three times that of the Pentagon, the "world's largest building" has opened in southwest China to mixed reviews from its first visitors.

But the first wave of visitors were divided over the attractions of the the structure, which houses 400,000 square metres of shopping space, offices, conference rooms, a university complex, two commercial centres, two five star hotels, and an IMAX cinema.

"It lacks creativity," said one visitor on Sina Weibo, China's version of Twitter.

Another visitor poked fun at its name.

"Why is everything in Chengdu called 'global'," the poster said.

However, some Internet users were impressed with the complex, which opened on June 28.

"It will become the new landmark of Chengdu," said one poster.

The Global Centre has a marine theme, with fountains, a huge water park and an artificial beach, accented by the undulating roof, meant to resemble a wave.

The centrepiece is a 5,000 square metre artificial beach, which includes a rafting course and a "seafront" promenade, complete with parasols and seafood outlets that can accommodate 6,000 people. nc/mtp