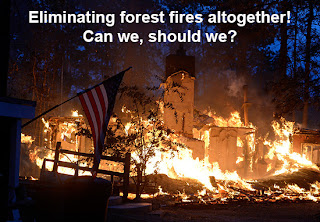 I actually like this idea. It is a natural adjunct to controlled burns which needs to be implemented almost everywhere anyway in order to eliminate fuel buildup. We also need proactive forest grooming, but that is normally asking for too much.

Any area adjacent to human occupation needs to be burned back substantially to provide a natural fire break. That is generally not been done in too many locales. This is meant to strip recent debris out while retaining the maturing forest. It obviously must be done when moisture content is just right and often enough to avoid too much buildup.

Thus most natural fires will be started outside that obvious window of opportunity. These need to be quelled. Standby tankers we already have and early warning can make it efficient.

Thus satellite and drone surveillance combined with some immediate reaction capability is sound.

Too many folks feel free to build any place they like without commissioning a study on the fire, flood and seismic risk. This also needs to end.

I recall visiting a friend whose ridge top aerie looked out over tinder dry ponderosa pine country in Colorado. It was difficult in winter and scary in the summer. Otherwise it was beautiful.

Over the past few days I’ve been listening to news reports about the devastating fires burning in Colorado.
Record heat, high winds, low humidity, and large amounts of beetle-killed trees have created “perfect storm” conditions for multiple wildfires to rage across the State.

At the same time that our hearts and prayers go out to all of the victims of these tragic fire, I’m also convinced that none of these fires should have gotten to this point. Here’s why.

During the first few minutes, between the time when a fire first starts and when it reaches a point of being out of control, is a containment window where only a few gallons of water or a few pounds of fire retardant is necessary to put the evil genie back into its bottle.

Using a fleet of surveillance drones, equipped with special infrared cameras, fires can be spotted during the earliest moments of a containment window, signaling a fleet of extinguisher drones to douse the blaze before anything serious happens.

Drones specifically designed for extinguishing forest fires have the potential to eliminate virtually 100% of the devastating fires that blanket newspaper headlines every summer.

Naturally there’s a downside to eliminating forest fires altogether, so how should we proceed?

How do we measure the true costs of a forest fire?

The True Cost of Forest Fires

In the U.S., wildfires burned an average of 6.9 million acres per year from 2002-2011, almost double the average acreage of the previous decade. Some of this can be attributed to factors such as beetle-kill trees, an increasingly mobile society, urbanization of mountain communities, etc.
A 2010 report titled “The True Cost of Wildfire in the Western U.S.” published by the Western Forestry Leadership Coalition challenged traditional methods for calculating the cost of forest fires.
They concluded, “Fire suppression costs, while often considered synonymous with the full costs of a wildfire, are only a fraction of the true costs associated with a wildfire event. Synthesis of case studies in the report reveals a range of total wildfire costs anywhere from 2 to 30 times greater than the reported suppression costs.”
One example they used was the June 2002 Hayman Fire which erupted in the highly populated Front Range corridor south of Denver, Colorado. Burning 137,759 acres, it was, at the time, the largest fire in state history. Four counties were directly impacted by the fire: Jefferson, Park, Douglas, and Teller.

Immediate impacts of the fire included the destruction of 132 residences, one commercial building and 466 outbuildings, with an estimated fire suppression cost of over $42 million.

After a thorough investigation of the fire by the U.S. Forestry Service, the true costs were re-calculated as follows:
All told, the costs for the Hayman Fire topped $207 million. Widely reported suppression costs only accounted for 20% of the total.

Using rough calculations, last years $1 billion fire suppression budget, at roughly 20% of the total would indicate a true cost in excess of $5 billion/year.

State of the Art Infrared Technology

In the late 1980s, I was an engineer working as part of an IBM team to build a mobile satellite command and control center for monitoring missile launches from space. This contract was part of Reagan’s “Star Wars” missile defense system.

Whenever a missile was launched, the heat plume coming out of the back of the rocket produces a distinct heat signature instantly detectable by satellites tens of thousands of miles away with infrared sensors.

The technology we were using over 25 years ago could instantly detect missile launches, anywhere on earth, within seconds of the launch.
I can only assume today’s technology is hundreds of times more precise than anything we were working with back then.

The above photo was taken with thermal-infrared imaging sensors on NASA’s Ikhana unmanned research aircraft in 2007 over the Harris Fire in San Diego County in Southern California.
That same technology could be adjusted to detect forest fires at a very early stage.

This image was taken with a thermal camera mounted to a helicopter.

Bluesky is a UK company specializing in aerial imaging. They recently purchased a state of the art airborne mapping system that included a LiDAR (Light Imaging Detection and Ranging) system with integrated thermal sensors and high-resolution cameras.

Onboard thermal sensors record infrared measurements capable of showing heat loss in buildings and monitoring pipelines. However, this same technology can be modified to work on flying drones to monitor fire activity on forestlands.

Aerial drone technology is advancing exponentially and much of what’s in use today will be museum pieces in five years.

Whether thermal scanners are mounted on satellites, high altitude aircraft, low attitude drones, or some combination of these, monitoring hotspots and instantly determining the danger level is well within our grasp.

Certainly not all fires are bad. For year we have debated whether to let nature take its course or have us intervene.

In 2012 the U.S. Forest Service, which manages over 35 million acres of forests, made a major policy shift, deciding to intervene on all fires, something environmentalists contend will cause significant long-term damage.

As an example, the Northern Rockies have a long history of wilderness fire, and records indicate most wildfires, when allowed to burn naturally, stay within wilderness boundaries and cost little to manage. Because the wilderness areas are remote and mostly surrounded by other public lands, escaped fires don’t threaten many structures.

The two other major federal agencies charged with managing public lands – the Bureau of Land Management and the National Park Service – so far have not followed the Forest Service’s lead.

So if we have the capability of spotting fires very early and putting them out, is that preferable to letting them burn? Do we need to craft new policies regarding when and where fires should burn vs. having us intervene?

As we add entire new toolsets to our fire suppression arsenal, these decisions become far more difficult. Who gets to decide, and how liable are they for making a bad decision?

Illustration of a fire extinguisher drone

I began this line of thinking looking for a solution to the wildfires we’re currently experiencing here in my home state of Colorado.

Admittedly, managing a 24/7-drone fleet over our massively huge forestlands will be no small undertaking. Surveillance drones will likely be separate from fire-suppression drones.

Extinguishing a fire under several layers of tree canopy will also be a challenge. Every kind of tree will likely require a different navigation strategy, and some densely covered grounds may be entirely unreachable until it’s too late.

Operating drones day and night through inclement conditions like wind, hail, and rain will require an enormous effort. But so does a full-frontal attack on a fire by smokejumpers, bucket-bearing helicopters, and slow lumbering slurry bombers that each dumped more than 2,000 gallons of red chemical fire retardant on a formerly pristine mountainside.

New technology rarely fixes everything and it’s easy to see some of the downside here. But doing nothing is also not an option.

Starting with only a portion of the combined budgets of the U.S. Forest Service, Bureau of Land Management, and the National Park Service could create a significant enough pilot project to prove its viability.

Knowing that we have this new capability is an obvious first step. So where do we go from here? I’d love to hear your thoughts.

2 students a couple of years ago created an invention that STOPS fire in its tracks using sound waves. Yet, nothing came of this new tech. I suppose that it may have had a potential impact of later putting out of business all the current fire extinguisher companies! As I can't find ANYTHING about it when searching.


That's the "name of the game" here on Earth. When ever a new gadget is invented, & then becomes a HUGE Industry. There are over a dozen PROVEN Cancer Cures! All natural too! BUT, a HUGE threat to the "Industry". So, they get suppressed, so many other people can 'keep their jobs, searching for a cure'. The "fire fighting INDUSTRY" is no different.


Now, back to the sound wave fire suppressor. How about, instead of using speakers, use a laser as a conduit & pipe the sound waves via a laser?? Lasers are used this way for many other applications. N.A.S.A. does this to send information from satellites, millions of miles away, back to Earth...