Biggest Dead Zone Ever Forecast in Gulf of Mexico 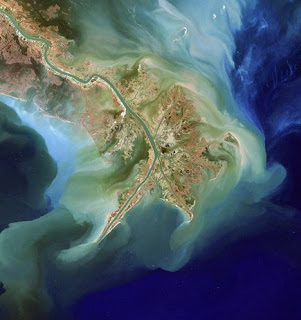 This is a a problem that will go away once we make a full conversion to biochar based soil management. It obviously cannot happen too soon.

The biochar sequesters the nutrients until called upon and prevents losses into the groundwater.

In the meantime we have no national will to do much because no one appears to be getting hurt except the local sea life. Any comment of mine is superfluous except to point out that it keeps getting worse as one would expect.

Biggest Dead Zone Ever Forecast in Gulf of Mexico

Oxygen-deprived area may be size of New Jersey, scientists say.

http://news.nationalgeographic.com/news/2013/06/130621-dead-zone-biggest-gulf-of-mexico-science-environment/
A possibly record-breaking, New Jersey-size dead zone may put a chokehold on the Gulf of Mexico (map) this summer, according to a forecast released this week.

Unusually robust spring floods in the U.S. Midwest are flushing agricultural runoff—namely, nitrogen and phosphorus—into the Gulf and spurring giant algal blooms, which lead to dead zones, or areas devoid of oxygen that occur in the summer.

The forecast, developed by the University of Michigan and Louisiana State University with support from the U.S. National Oceanic and Atmospheric Administration, estimates a Gulf dead zone of between 7,286 and 8,561 square miles (18,870 and 22,172 square kilometers). The largest ever reported in the Gulf, 8,481 square miles (21,965 square kilometers), occurred in 2002.

On the flip side, the Chesapeake Bay—the country's biggest estuary—will likely experience a smaller-than-average dead zone this summer.

The forecasts are made using computer models, which are based on U.S. Geological Survey data of nutrient runoff in U.S. rivers and streams.

National Geographic talked to forecast contributor Donald Scavia, an aquatic ecologist at the University of Michigan, about dead zones—and why we should care about them.

A dead zone, which occurs in the oceans and Great Lakes, is an area usually in the bottom waters where there's not enough oxygen to sustain life. It's generally caused by algae stimulated by lots of agricultural nutrients in surface waters. When nutrients enter the water, [they] create an algal bloom. [When] the algae sink, bacteria start decomposing them, which uses up the [available] oxygen. (Also see "World's Largest Dead Zone Suffocating Sea [2010].")

During summer, what you have is a stratified water column that inhibits oxygen from the atmosphere getting down to the deep water. As the bacteria use up oxygen, it's not being replenished, so oxygen concentrations decrease until you get to two milligrams of oxygen per liter of water, which is bad for fish. Below that, fish that can will leave that area. Other organisms that can't [leave] die.

What are examples of organisms that would die?

Animals that live on the bottom. Worms, clams, the kind of things that fish like to eat. Some fish may have trouble.

Why do we track and study dead zones?

It's important because most often those areas that become uninhabitable byfish, are preferred habitat for fish. To draw on an analogy that's ironic, it would be like taking thousands of square miles of land in the Midwest out of production. People wouldn't like it.

So dead zones are an invisible issue.

Yes. They're deep in the bottom waters, and you can't see oxygen.

What was your reaction to your finding that the Gulf of Mexico may have a record-breaking dead zone?

To be honest, I was expecting that, mostly because of reports of massive flooding in the Midwest. The nitrogen and phosphorus in the floodwaters drive the problem.

Is the news that the Chesapeake Bay's dead zone is small promising?

It's not really, because people in the area are not doing enough nutrient management—it was a dry spring. The amount of nutrients going into systems is really dependent on rainfall. The more water you get, the more nutrients you get going in there. The real management issue—regardless of whether it's a wet or a dry year—is you've got to keep the nitrogen and phosphorus on the land and not in the rivers.
Is that mostly done by state regulations?

It's actually mostly controlled by the Farm Bill, the main funding mechanism for conservation in agriculture. The problem with the Farm Bill is there's far more money for supporting commodities and subsidies and not enough into conservation. I'm not blaming farmers—farmers do what the Farm Bill pays them to do—but we need a Farm Bill that's smarter and supports more conservation programs. (The most recent Farm Bill, which is updated every five years, was rejected by the House of Representatives on Thursday.)

Do dead zones have lasting effects on the environment?

There's a sense in the Chesapeake, Lake Erie, and the Gulf of Mexico that repeated dead zones are somehow making systems more sensitive to nutrients. For instance, the same amount of nutrient load now is producing larger dead zones than a decade ago. (See "Female Fish Develop 'Testes' in Gulf Dead Zone.")

We think it has something to do with residual organic matter that's carried over from one year to the next, or from the changing types of organisms living in the ecosystem. (Also see video: "Did Gulf Spill Boost 'Dead Zone'?")

What should the public know about dead zones?

The key thing is they really have the potential to devastate the fishing industry—for instance, shrimp in the Gulf, walleye in the Great Lakes, and striped bass in the Chesapeake Bay. The solution is really to be more aggressive in dealing with pollution coming from agriculture.

This Q&A has been edited for length and content.

Yeah, it's amazing how fast things can get to FUBAR, when you blow -up an oil well and nuclear plant at Fukishima Diachi... ;)