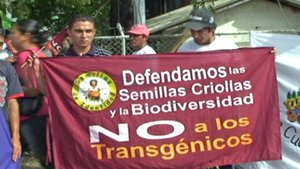 The case against GMOs is quickly becoming overwhelming and serious pushback is also rapidly building up. It is becoming outright hostile throughout Europe and Russia.

As the alternatives are seriously superior to the failing GMO protocol the transition itself will not be too painful unless you are operating a huge industrial scale operation. Yes, huge amounts of capital are surely at risk here.

The reason this has happened is pretty clear cut. The science demands long time lines to clarify safety and effectiveness. There is only one clear way to do this and it is with a large long term field trial as has been demonstrated by the thirty year trial operated by the Rodale Institute in its comparison of best current organic methodology to best available industrial methodology. Organic won.

The bad news is that study was also the best field test of many of those industrial protocols.

Instead, industry has been rushing to market with fudged science and conducting field trials as safe practice for all farmers.

I should mention that blanket application of soluble fertilizers has also proven to be a bad idea with time limits that will run out. Yet better alternatives exist although in fairness, beyond my postings, no one else understands this. So we carry on until a real boot drops.


Myths and outright lies about the alleged benefits of genetically engineered crops (GE crops or GMOs) persist only because the multinationals that profit from them have put so much effort into spreading them around.

They want you to believe that GMOs will feed the world; that they are more productive; that they will eliminate the use of agrichemicals; that they can coexist with other crops, and that they are perfectly safe for humans and the environment.

False in every case, and in this article we’ll show how easy it is to debunk these myths. All it takes is a dispassionate, objective look at twenty years of commercial GE planting and the research that supposedly backs it up. The conclusion is clear: GMOs are part of the problem, not part of the solution.

An article by GRAIN, published in Soberania Alimentaria, numero 13.

MYTH: GE crops will end world hunger.
FACT: GE crops have nothing to do with ending world hunger, no matter how much GE spokespeople like to expound on this topic. Three comments give the lie to their claim:


In the year GMO seeds were first planted, 800 million people worldwide were hungry. Today, with millions of hectares of GMOs in production, 1 billion are hungry. When exactly do these crops start “feeding the world”?
MYTH: GE crops are more productive

FACT: Not true. Look at the data from the country with the longest experience of GMOs: the United States. In the most extensive and rigorous study, the Union of Concerned Scientists analyzed twenty years of GE crops and concluded that genetically engineered herbicide-tolerant soybeans and corn are no more productive than conventional plants and methods. Furthermore, 86% of the corn productivity increases obtained in the past twenty years have been due to conventional methods and practices. Other studies have found GE productivity to be lower than conventional.
Crop plants are complex living beings, not Lego blocks. Their productivity is a function of multiple genetic and environmental factors, not some elusive “productivity gene.” You can’t just flip a genetic switch and turn on high productivity, nor would any responsible genetic engineer make such a claim. Even after all this time, GE methods are quite rudimentary. Proponents of the technology count it a success if they manage to transfer even two or three functional genes into one plant.
The bottom line is that twenty years and untold millions of dollars of research have resulted in a grand total of two marketable traits – herbicide tolerance and Bt pest resistance (see below). Neither has anything to do with productivity.
MYTH: GE crops will eliminate agrichemicals

FACT: It’s the reverse: GE crops increase the use of harmful agrichemicals. Industry people try to put this myth over by touting the “Bt gene” from the Bacillus thuringiensis bacteria, which produces a toxin lethal to some corn and cotton worms. The plants produce their own pesticide, supposedly obviating the need to spray. But with such large areas planted to Bt monocultures, the worms have quickly developed resistance to Bt; worse, a host of formerly unknown secondary pests now have to be controlled with more chemicals.
The other innovation trumpeted by the “genetically modified corporations” consists of plants that can withstand high doses of herbicides. This allows vast monocultures to be sprayed from the air, year after year on the same site. It’s a convenience for industrial farmers that has abetted the spectacular expansion of soybeans in recent years. Thirty years ago there were no soybeans in Argentina; now they take up half the country’s arable land. Concurrently, the amount of the herbicide glyphosate sprayed in Argentina has skyrocketed from 8 million litres in 1995 to over 200 million litres today – a twentyfold increase, all for use in GE soy production.
The same thing is happening in the United States. Herbicide-tolerant GMOs have opened the floodgates, and glyphosate and other herbicides are pouring through onto farmers’ fields. In 2011, US farmers using this type of GMO sprayed 24% more herbicides than their colleagues planting conventional seeds. Why? For reasons any evolutionary biologist could have predicted: the weeds are evolving chemical resistance. In short, the GE “revolution” is an environmental problem, not a solution.

MYTH: Farmers can decide for themselves. After all, GMOs can peacefully coexist with other crops.
It sure doesn’t look that way. GE boosters may claim nobody’s forcing farmers to use GMOs, but a pesky little fact of basic biology implicates non-GE farmers against their will. It’s called cross-pollination: Plants of the same species interbreed, and sooner or later the genes artificially inserted in the GE crops cross into the conventional crops.
In Canada, the widespread growing of genetically engineered canola has contaminated nearly all the conventional canola and in so doing wiped out organic canola production. Similar contamination has been found in corn crops around the world.

The introduction of GE seed is especially alarming when there is potential for contamination of local varieties. Mexico is the centre of origin and diversification of corn. For years now, Mexican indigenous communities have been noticing odd traits appearing in some of their varieties. Various studies confirm that this is because of contamination by GE corn imported from the United States. Now, the Mexican government is proposing to allow multinationals to plant up to 2.4 million ha of GE corn in the country. If this project goes ahead, it will not only be an attack on the food sovereignty of the Mexican people: it will be a threat to the biodiversity of one of the world’s most important staple food crops.
In the Spanish state of Aragón, farm and environmental organizations have been complaining since 2005 that over 40% of organic grain has traces of GE content and can no longer be sold as organic or GMO-free.
What’s really perverse about this fake “freedom to farm” argument is that certain transnationals have been forcing farmers to pay for seeds they never planted. In the United States, Monsanto has taken hundreds of farmers to court for supposedly infringing its intellectual-property rights. Monsanto detectives roam the countryside like debt collectors, looking for “their genes” in farmers’ fields. In many cases, the genes got there because the farmers either purchased contaminated seed or had their own crops contaminated by a neighbour’s field. Whatever the case, it’s a lucrative strategy that has brought in millions of extra dollars for the corporation. And it has the added benefit of scaring farmers away from buying anything but Monsanto seeds. Sounds a lot more like the “freedom” to do exactly what the multinationals tell you to.
Genetic engineering: a stalled science
GE crops are in the hands of very few companies. Monsanto most notoriously, along with Dupont, Syngenta, BASF, Bayer and Dow, dominate GE research and patents, corner 60% of the world seed market, and control 76% of the world agrichemical market.
Yet all the profitable “science” owned by these companies comes down to two and only two traits: herbicide-tolerance and Bt.
In 2012, 59% of the area planted to commercial GE crops consisted of crops resistant to the herbicide glyphosate, a product originally patented by Monsanto, while 26% consisted of insecticidal Bt crops and 15% consisted of crops carrying both traits.
Two traits. That’s all these multinationals have to show for twenty years of research and mega-millions of dollars invested. Some revolution! The real measure of what GE technology has produced is to be found in damaged ecosystems, potential health harms, farmer dependency – and big profits for the companies.


MYTH: GE crops pose no threat to health and the environment.
At the very least, the biosafety of transgenic crops is an open question. Do we really want to entrust our health to an industrial agriculture system in which GE purveyors control food security offices and dictate their own standards? I don’t think so. Food sovereignty requires that the people, not the companies, have control over what we eat.
Nevertheless, our plates are now filling up with food items from plants with altered DNA and heavy pesticide loads, and we are told to simply shut up and eat. Concerns have been heightened by a number of credible reports on GMOs and their attendant herbicides:

Finally, there is the incontrovertible evidence that glyphosate can have a direct impact on human beings, causing abortions, illnesses, and even death in high enough doses, as explained by Sofía Gatica, the Argentine winner of the latest Goldman prize.
Our health is ours to defend, and so are our farms, and so is the health of the food supply that will nourish the generations to come. Food sovereignty now!
+ + + +
FIND OUT MORE
New studies keep emerging on the negative impacts of GE foods and crops. Click this link for a list of 300 scientific articles presenting this information.