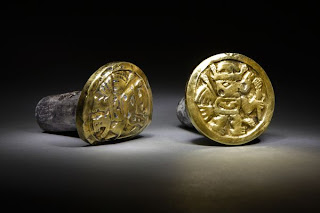 The difficulty with Archeology is that you have to wait for someone to get lucky and you will be in direct competition with every tomb robber imaginable. It appears that we just got lucky in Peru. Better we have a high status tomb with both gold and silver artifacts as well as the all important bronze axes that tie this to the Atlantean world or its echo.

Recall that we understand that these axes were the effective currency of the Atlantean world. Thus this provides us a tentative linkage in artifacts for the Wari to the apparently earlier Atlantaic World.

I continue to be cautious in accepting the ages of South American civilizations. They smack of a severe bias to late sites and I am not sure that this should be so without working through an awful lot of raw data.

We really know little about how these cultures moved forward in time. As well I am also conscious of the real antiquity of Mesopotamian civilizations that lasted intact for thousands of years. This only ended with the advent of successful cavalry.

We have been able to push back the Olmecs to 1000 BC showing at least 1500 years of continuity there. I expect as much in So. Am. for the same reason and the obvious Atlantean genesis all over the place there.

By by Megan Gannon,

A rare, undisturbed royal tomb has been unearthed in Peru, revealing the graves of three Wari queens buried alongside gold and silver riches and possible human sacrifices.

Though the surrounding site has been looted many times, this mausoleum has managed to evade grave robbers for hundreds of years, archaeologists say.

Long before the Inca built Machu Picchu, the Wari empire flourished between A.D. 700 and 1000 throughout much of present-day Peru. At a time when Paris had just 25,000 residents, the Wari capital Huari was home to 40,000 people at its height, according to National Geographic, which reported the find. [In Photos: Amazing Ruins of the Ancient World]

Despite their reach, the Wari have remained somewhat mysterious, and it is rare for archaeologists to find burials that have not been ravaged by grave robbers. In hauling away treasures, looters destroy archaeological context and information, leaving researchers grasping for answers about how ancient people lived.

But a team led by Polish and Peruvian archaeologists discovered an underground mausoleum that's being billed as the first unlootedWari imperial tomb, sealed for centuries under 30 tons (27 metric tons) of loose stone fill.

The 1,200-year-old chamber was found in El Castillo de Huarmey, north of Lima. Milosz Giersz, an archaeologist at the University of Warsaw in Poland, told National Geographic that he first saw a faint outline of the mausoleum in aerial photographs of the site.

In digging through to the "temple of the dead," the team reportedly discovered rows of human bodies buried in a seated position (some of them suspected to be human sacrifices). They also found three Wari queens in small side chambers among valuable grave goods, such as gold tools for weaving, brilliantly painted ceramic vessels and a drinking cup carved from alabaster.

The queens may not have been laid to rest for good after they died.National Geographic also reported that there were traces of insect pupae found in the queens' bodies, suggesting that their mummies may have been periodically put out on display, left exposed to the open air, to be venerated by the living Wari people.

Over months of digging, the team unearthed more than a thousand artifacts from the site, including semi-precious stone beads, carved wooden artifacts, bronze axes and jewelry made from gold and silver Giersz told National Geographic that he expects the site will keep archaeologists busy for years to come.

Peru's Minister of Culture and other officials are set to officially announce the discovery today (June 27) in a press conference at the site.

I still feel it is a shame the the Catholic Religion and them so-called priests and their armmies came to South America and destroyed much of the History of these countries just to steal their Gold.