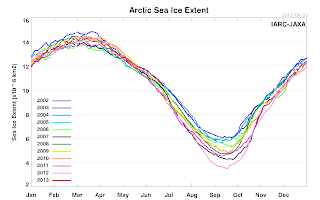 I would be a little more thrilled if this were to be slightly predictive. More likely it is outright misleading, but it does remind us that the whole pattern of macroscopic variation is a primary third order relationship which is really a binary relationship held in place by the strength of the PNA pattern.
In the meantime delta heat has been injected on effectively a constant basis since the late seventies at least if not since the early sixties. This is easiest accomplished by the agency of the sea for which we even have conforming evidence. That at least allowed me to predict a primary collapse of sea ice by 2012 as early as 2007.
I am more and more convinced that the atmospheric aspect of arctic warming is secondary to the impact of ocean currents that also vary but over vastly longer time cycles. Recall that shutting off the gulf stream would encase the north Polar Ice Cap in a raging Ice Age at least to fifteen degrees south and that ice floes would flood Hudson Bay all year round.

A new paper published in the International Journal of Climatology finds 40-79% of the variation in western Arctic sea ice extent is due to natural atmospheric circulation patterns such as the Arctic Dipole (AD), Arctic Oscillation (AO), and Pacific-North American (PNA) pattern. Prior research has shown Arctic sea ice extent is also controlled by natural variation of winds and storm activity, and related to the geography of the Arctic, not alleged anthropogenic global warming.

ABSTRACT: In this study, a synoptic climatological approach is employed to assess the relationship between the frequency of circulation patterns (CPs) and the latitude of mid-September sea ice minima in the western Arctic. Fifteen CPs are created via principal component analysis and cluster analysis from daily NCEP/NCAR reanalysis sea-level pressure (SLP) fields across a grid from 50 to 90°N and 150°E–100°W from 1979 to 2011. The frequency of these CPs are statistically compared with the latitude of the sea ice minimum from passive microwave data for each of 11 equally-spaced longitudes (176°W to 126°W) extending into the Chukchi and Beaufort Seas. Monthly frequencies for each of the 15 CPs from March to September, signifying the melt season, for each year are correlated with the ice minimum for that September. These monthly frequencies are then entered into a stepwise multiple linear regression (SMLR) and collectively, CP [circulation pattern] frequencies explain 40–79% of the total ice retreat variance across the longitudes. The frequency of one cluster, CP 11, representing a broad high pressure area over the Beaufort Sea, is highly correlated with the latitude of the sea ice minima; June and August frequencies of this pattern are the initial predictors at 8 of the 11 longitudes and explain 22–32% of the variance. This pattern has occurred more frequently from 2007 onwards; compared with a June mean occurrence of 9 days during 1979–2006, CP 11 occurred 16 times in June 2007, and on average more than 17 days per month during June 2008–2011. The Arctic Dipole (AD), Arctic Oscillation (AO), and Pacific-North American (PNA) pattern indices are significantly correlated with CPs 11–13 frequencies throughout certain summer months, further indicating strong relationships between summer circulation and sea ice minima in the region.

I stopped reading when I saw the graph. There are liars, damn liars, and statisticians. Figures do not lie, but liars figure. There are a lot of ways to lie, and one of the most insidious is by omission.

You omitted the two standard deviation block. That renders the entire graph a lie.