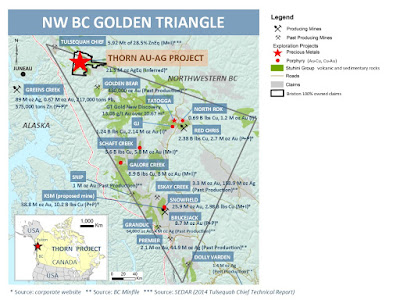 Most of my readers are hardly aware that i spend my earning years actively involved in the promotion of mining ventures and literally have decades of experience and knowledge as a result.

So in fairness, most projects stop looking for new resources after they round up about 15,000,000 ounces.  It literally becomes pointless.  In this case an extensive drill program massively surprised them by tripling apparent reserves to 20,000,000 ounces and far more important it increased the grade as well.  The copper profile is improved as well.

We certainly have a global scaled copper and gold camp here that will last at least a Century.   The map i am showing you is of the so called golden triangle.  However i want to share with you that early reconnaissance identified perhaps two dozen serious copper prospects back in the sixties here.  Infrastructure is now catching up and this will become a copper supplier equivalent to Chile as well as an increasingly important gold source...

Seabridge Gold has bulked up again its already massive KSM gold-copper-silver project in British Columbia in both size and grade.

Shares in Seabridge Gold (TSX:SEA) (NYSE:SA) were soaring in pre-market trade in New York after the Canadian company bulked up again its already massive KSM gold-copper-silver project in northern British Columbia in both size and grade.

Before the opening, Seabridge stock was already exchanging hands at $10.40, up 4.8% on the New York Stock Exchange, after hiking its estimated inferred gold and copper resources at the Iron Cap deposit — one of four that make up the company's KSM project — by more than 300% each.

The success of the 2017 drill program at Iron Cap, coupled with the deposit's proximity to proposed mine infrastructure, has Seabridge considering the potential of mining it sooner than anticipated, the company revealed

“All our objectives at Iron Cap were more than accomplished last year. A larger, richer Iron Cap deposit is expected to take a more prominent place in our mine planning, “ the company’s chairman and chief executive said in the statement.

“We believe Iron Cap has the potential to make a strong contribution to improving project economics thanks to its higher grade and its favourable capital and operating costs," Fronk noted.

Seabridge Gold holds a 100% interest in several North American gold resource projects. But the miner’s key assets are KSM property located near Stewart, B.C, as well as the Courageous Lake gold project — in Canada’s Northwest Territories. The company also owns Iskut, in B.C., which it obtained with the closing of the SnipGold Corp. acquisition, in June, 2016.
Posted by arclein at 12:00 AM