USA Heavy Lift is Back with spaceX 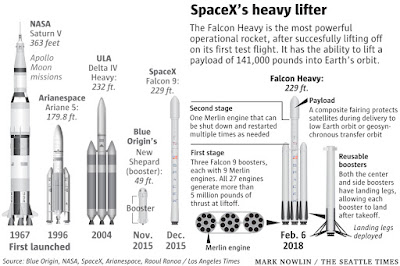 Having lived through the entire Saturn V experience it is wonderful to see us recover this capability.  Not withstanding that we have gravity lift capacity operating today, it is not been made conveniently available to general knowledge.   It is also affirmation that our expertise is now home grown.  After all the whole Space Race was a German operation top to bottom simply because our educational infrastructure was woefully inadequate back in the day and theirs had already built out a multi generational tradition.  You really did expect to learn German back in the sixties..

I personally caught the wave and that was really in 1967.  Our full educational build out in terms of STEM took place thereafter.

The fact is that we need to build a proper space station in low orbit for commercial purposes ASAP.  This tech will facilitate that along with our computer assisted design work.  These lifters been largely reusable will do the trick nicely.  It is not difficult to imagine sustaining a daily launch schedule to support such a station.

On Tuesday afternoon, a rocket the size of a 20-story building, containing 27 engines and a cherry-red Tesla Roadster as its payload, is slated to lift off from NASA’s Kennedy Space Center in Florida. It will be the maiden flight of Space X’s Falcon Heavy, the most powerful rocket to launch in 45 years, since NASA’s Saturn V, which last flew in 1973.