FISA-Gate: The Plot To Destroy Our Republic 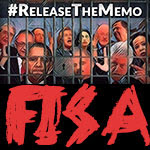 What should be talked about is the inferred conspiracy with the Democratic party and a Saudi colluders using Pakistani intelligence assets no less.  Where they out of their minds or was it set up in conjunction with Obama to facilitate an Islamic Agenda?
Worse for them, is that Trump certainly has all the data on it and knew about it long before.
As this makes completely clear, a group of powerful insiders of the Deep State took it upon themselves to work toward eliminating the duly elected president by all possible means. Problem is that the Trump administration has turned this attack on its perpetrators.
Huge amounts of the related Intel has been provided to the media but has also been ignored by the MSM.  Saddening actually.  Their demise is certain.  A media monopoly is not a free press...

FISA-Gate: The Plot To Destroy Our Republic


You don’t need any special analytical abilities to understand “the memo” and its meaning. A simple reading reveals that allegations of skullduggery peeking by the Obama administration during the presidential campaign were entirely accurate: the memo just filled us in on the details. And while the debate has largely been over whether the proper legal procedures were followed by the FBI and administration officials in spying on Carter Page – someone only marginally connected to the Trump campaign – the real question is: why were they sneaking around Page at all?


Oh, he claimed to be an “informal advisor” to the Russian government: he had business interests in Russia and met with Russian officials. Furthermore, and most importantly, he opposed the anti-Russian hysteria that permeates official Washington, and he often said – in public speeches as well as privately – that US sanctions against Russia are a mistake.


But so what? Since when is it illegal to hold these views?


Page was never a “Russian agent,” and the FBI never proved that he was or is. Instead, they submitted that phony BuzzFeed “dossier” to the FISA court as “evidence” justifying their hot pursuit of him on more than one occasion. They did so without telling the judge who paid for the dossier (it was the Clinton campaign, as Trump claimed when this first came out) and they withheld other important details about its provenance – including that it was written by Christopher Steele, a “former” British intelligence agent who openly expressed a passionate desire to see Trump defeated. Nor had they verified the information in the dossier related to Page, because they “didn’t have time,” as former DNI chief James Clapper has said on numerous occasions.


Page was targeted and the information gleaned from listening in on his phone conversations, reading his email, and god knows what other sneaky intrusions, was leaked to the media in a concerted campaign to influence the outcome of the election. So, yes, there was “collusion” – except it wasn’t a pact between Putin and Trump but rather an alliance between Hillary’s campaign and the national security bureaucracy to get her elected. In effect, the top leadership of the FBI became an adjunct of the Clinton campaign – and, after Trump won, they executed a plan to frame him for “collusion” and oust him.


When Intelligence Committee chair Devin Nunes announced he was going public with it, the Democrats and their Republican Never-Trump allies said it meant the national security of the United States would be put in mortal danger. They trotted out the old “sources and methods” argument, which, it turned out, did not apply to the memo – because it just laid out the bare facts, and revealed neither sources nor methods. (Unless one is talking about the political methodology of the FBI scam, which involved sneaking, peaking, and then leaking).


The Deep State-Democrat fallback position is that Carter Page is really beside the point, because the real genesis of the Russia-gate probe was the investigation into 28-year-old George Papadopoulos, an “energy consultant” even more marginal to the Trump campaign than Page.


According to the New York Times, after being introduced to a number of Russian contacts by a Professor Joseph Mifsud – supposedly a “Maltese academic” who has since completely disappeared – the mysterious pedagogue told Papadopoulos that the Russians had “thousands” of incriminating emails that would damage Mrs. Clinton’s campaign. Although there’s no evidence Papadopoulos communicated this information to the Trump campaign, the young would-be mover-and-shaker got drunk one night in a London pub and supposedly told an Australian diplomat about the emails: it’s not known whether the Australian had a role in getting him in a talkative mood, but we are told the two met due to the efforts of an Israeli diplomat in London.


If this sounds like a setup to you, then you win the door prize: your very own copy of What Happened, now going for fifty cents at the remainder table.


The Russia-gate conspiracy theorists believe that the Trump campaign somehow had a hand in either procuring or publishing the Clinton/Podesta emails – even though no one has ever produced any evidence of this. Aside from this important lack, there are some big problems with the conspiracist thesis. To begin with, if the Trump people knew about the DNC/Podesta emails in advance, why didn’t they utilize this vital information before WikiLeaks published them? And what purpose would it serve the Russians to let the Trump camp in on the operation, and risk exposure in the process? If they wanted to help Trump, all they had to do was make sure the emails were published. The collusion theory makes no sense – but, then again, Russia-gate has never made much sense.


While the most fanatical anti-Trump types simply denied everything in the memo, the Beltway “libertarians” who hate Trump’s guts — and the honest liberals like Glenn Greenwald who also hate Trump’s guts but who have a conscience and won’t go along with the Russia-gate hoax – were reduced to finger-wagging in response to the memo’s release. Why, they asked, did these very same people, like Rep. Nunes, vote to expand the Deep State’s power to spy on Americans right before the memo came out?


The question answers itself. As Rep. Thomas Massie put it: “Who made the decision to withhold evidence of FISA abuse until after Congress voted to renew FISA program?” More than a few votes would no doubt have been cast differently, and perhaps the outcome would’ve been different. Certainly the debate would’ve been more extensive, and much more interesting.


What’s exciting, to me at least, is the promise by Nunes that this is just the start of the revelations. Next up: the key role played by the State Department in the plot to destroy our republic and hand power over to unelected Deep State bureaucrats. And this means the important – perhaps decisive – part played by foreign actors in all this will be exposed to the light of day. If you thought there was howling about the first Nunes memo, wait until you hear the screams of pain coming from the foreign lobbyists and their “American” sock puppets over Part Two of the Nunes narrative. The real story of who is subverting our republic – and colluding with foreigners to accomplish that goal – is about to come out.


I can hardly wait!


This isn’t about Trump. You may hate him. You may love him. That’s irrelevant. What matters is that a powerful group of Washington insiders is trying to exercise its assumed veto power over who gets to inhabit the White House – and that is impermissible as long as the republic endures.


NOTES IN THE MARGIN

You can check out my Twitter feed by going here. But please note that my tweets are sometimes deliberately provocative, often made in jest, and largely consist of me thinking out loud.


I’ve written a couple of books, which you might want to peruse. Here is the link for buying the second edition of my 1993 book, Reclaiming the American Right: The Lost Legacy of the Conservative Movement, with an Introduction by Prof. George W. Carey, a Foreword by Patrick J. Buchanan, and critical essays by Scott Richert and David Gordon (ISI Books, 2008).


You can buy An Enemy of the State: The Life of Murray N. Rothbard (Prometheus Books, 2000), my biography of the great libertarian thinker, here.
Posted by arclein at 12:00 AM