Why couldn't the Nazis mass produce tanks the way the Soviets and Americans did? 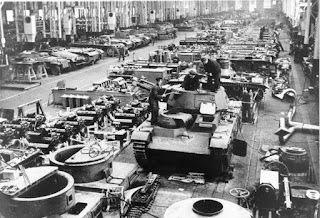 When the war broke out, they had not made the transition to mass production strategies and suffered accordingly under the pressure of war.  The error was deeper than that.  all war production is by definition a consumable and expected to be knocked out long before mechanical wear becomes an issue.

Thus you want to be able to change things out often.  This means standardization and more standardization.  Yet this shows that was not the overriding rule.

Recall soldier were sent into the fight with as little as three months of training.  You cannot teach the right instincts until he is in a fight.  Better to make him fit enough and see if he can survive a scrap than to spend the necessary additional eighteen months to produce a polished killer.  If he is good, then send him back for improvement.
..

Why couldn't the Nazis mass produce tanks the way the Soviets and Americans did? Was it an engineering problem, or was the German economy not advanced enough?


For this answer, I refer you to this excellent presentation by Jonathan B. Parshall:

To summarize his presentation:

The Germans lacked dedicated hard tooling for specific parts which created bottlenecks in changeovers, meaning the same tool was used to produce different parts in small batches, and had to change between producing parts.


Note also that the Germans had a philosophical bias against mass production. Much of their economy was a cottage industry, driven by skilled craftsmen producing a superior individualized product that directly reflected upon their abilities. As Mr. Parshall notes in his presentation, the field manual for the Tiger I brags that it is the product of over 300,000 man hours.


Additionally, as a result of their factory bottlenecks, particularly in hard tooling, the Germans also were unable to produce a sufficient supply of spare parts and components (such as an engine/transmission) to keep these vehicles running.


It was an engineering problem in the sense that the Germans struggled to design tanks that could be mass produced efficiency.


It was an operations management problem in the sense that the Germans struggled to implement efficient mass production.


In order to increase their tank production to near American and Soviet levels, they would have had to have solved both of these problems.


“This is just a crazy way of making armored fighting vehicles.”
Posted by arclein at 12:00 AM