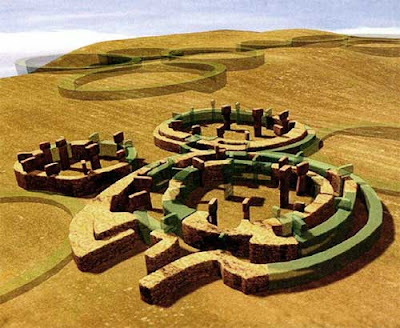 It is remarkable that Gobekli Tepi turns out to be a temple and that all those cave drawings are also representations of Shamanic visions.  This is good though.
We understand that the altered state experience was important then and is now becoming useful and better understood as well today.
My own investigations has revealed to me that a sensitive who is an informant of mine was led to an encounter with the Green Man in broad daylight and in addition during a meditative state also encountered the King of the Dandelions.
In a more natural world it makes sense that we would also encounter the equivalent spirit of the Lion, the Deer, etc for each identifiable species.  Thus we suddenly have the validity of the Lion King uniquely separate from been a specific representation of Jesus as per CS Lewis.  The whole topuic of symbolic values slides out the window.
Our shamans did encounter lion kings, deer princes and their like during their meditations. These were easily superior to their living aspects and instructive of our own relationship with the divine.

What i am sharing with you is a new Spiritual Cosmology nicely linked physically to my Cloud cosmology. The primary spiritual form or the supreme representation is what we identify as the human form.  All life evolves toward that form.

So we have the king of the Dandelions empowering millions of dandelions with aspects of its own GREAT SPIRIT.  Thus the LION KING is the GREAT SPIRIT of the lions and may well have a large number of aspects or perhaps all of the lions though i expect a finite number instead.  In our human case i am informed that we start out with 32 aspects during each incarnation.  Thus an eight lifetime cycle will normally last a century each and involve the life experiences of 8 X 32 aspects or 256 lives over an epoch in history that can often be defined.


The only "true" religion is the religion of first hand experience. All religious systems are built on the mystical experiences of one individual or a handful of individuals sharing a religious experience. Gobekli Tepe is the oldest temple in the world and it gives us a window in the world of prehistoric thinking. Ancient people valued experiences of altered states of consciousness as meaningful sources of information supplied by God[s]. This is the first form of religiousity. It is truly the first religion or the oldest religion.