The Three Great Events in our Time under CYRUS 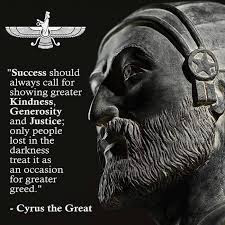 My current sense of what is happening from the ongoing intel and the general noise coming from MSM is that real progress is been made, but also that it is been truly paced carefully.  My own impatience has colored my own judgement and we must be wary.

First of all, it now appears that Trump has real control over the whole process now.  His intel has apparently uncovered the dirt used to control key opposition players allowing him to powerfully co - opt them.  This has been indicated just last night.  What this means is that the Money Deep State has lost control over key actors.  They will be allowed to squawk for show but will then follow Trump's orders all while placating the involved audiences.

This is what took a full year to settle.

We must also now be addressing the media preparation for full disclosure, or more correctly nuanced and paced disclosure allowing the public to catch up to what is happening.  The memos are disclosing a profoundly illegal subornation of the US Constitution by the moneyed Deep State.  It does not get worse than that.

For the management cadre of the FBI to collude with the DNC in an attempt to derail the Trump presidency both before and after his victory is astounding.  What were they thinking?  This is firing squad territory.

That the DOJ and the CIA are in the thick of it is a given.  I am now expecting more disclosure along those same lines.

The question is what the president will authorize as a resolution?  The reason i ask that is that he is practicing catch and release while intel is listening to every communication made allowing them to counter every attempt they make to attack the presidency itself and the government in place.  This has included that run to the bunker and the derailment attempt, an attempt to disrupt the Super bowl amongst others.

At the same time i do think that the navy fired a missile at Hawaii and then destroyed it a hundred miles out after all the alarm systems had kicked in to fully ship NSA data back to the mainland.  You can be certain that the Navy is operating in conjunction with the Marines and military intel here.

All this should scare the hell out of you.  An actual war is physically underway here.  Last night the USSS went of high alert, because they know that the opponent is completely desperate now.

I do think that the CIA needs to be stormed by the Marines and peremptorily disbanded and mostly seconded as needed to military intelligence services.  That is what i would plan.  It is completely clear that they are superfluous to our intel needs and worse have been actively meddling in foreign policy with or without sanction.  This certainly includes the execution of JFK in 1963.  Yet it also can wait a bit if you are listening to them all.

The fact pattern surrounding the Clintons strongly suggests that the CIA kill teams still exist in a modified form as well as access to criminal gang kill teams.  Do note though that the M13 team responsible for Seth Rich were destroyed and that would have plausibly been a CIA kill team.

Trump is the president but the organization behind him has been planning this for at least five years.  That means all are on side and acting with dispatch and this has overwhelmed the options available to the Deep State.  At the moment, attacks on the Deep State are happening daily but paced to stay below the radar for the moment.

Some enemy options will simply not be triggered now because of their consistent failure.  Recall that all the blackmailed have just got a get out of jail free card.  What this means is that they have been interviewed and told that we know too and so long as you play ball and trust us we will save your miserable life.  Recall the long faces of Theresa May and Chuck Schumer.

Now something else.  The NWO schema is Nazism reborn and it is a global conspiracy of the worst kind in which the old elite have been suborned in particular along with their wealth as also happened in Germany.  It is operated through the central banking meme itself and this need not be at all. I do think that this ongoing Intel counter operation is global in its extent and it is clear that Trump has both China and Russia as his allies in this.  They are very happy to let him lead the assault.

I now expect North Korea to capitulate and rejoin South Korea to reform a united Korea.  They have clearly been scared s$$tless and heavy secret negotiations are surely underway.  China and Russia have moved to their border to underline the 'or else'.

This has not been mentioned anywhere else, but i do think that we can see two major events evolving or emerging in Europe.  The Big one will be the absorption back into the Orthodox communion of the Roman Catholic Church with a general invitation to all Christians to rejoin this communion while preserving their natural evangelical nature.  This will inspire a massive revival inside Europe itself and a winnable confrontation with Islam that spills over into the Islamic world.  As prophesied, Pope Francis will be the last Pope.

The second Big event will be the emergence of a united communion of Europe including Russia et al and the election of a European president by all Europeans.  Putin is the obvious first choice for this as it would allay the last vestiges of Russian distrust.  A constitution similar to the USA may well be appropriate as it has actually worked well enough as has the more commonly used parliamentary system which is too easily weakened though.  The electoral college system needs to be deeply considered because of the presence of multiple nationalities.

All this sets the stage for a full on assault on Islam itself or more properly The Great Confrontation in which we demand that all Muslims and even Christians actually read the Koran in their own language and understand those red lined sentences rejected by Jesus and then make up their own mind as to who they will then follow..

That is of course the third great event coming our way and odds are it can all be done with scant shots fired as such will be obviously fatal to them. The NWO needed a WWIII in order to derail this global threat to their hold on power and to keep us all stupid.

Learn to pray for all of US.  CYRUS bestrides the world and the GODS of old are reincarnating..