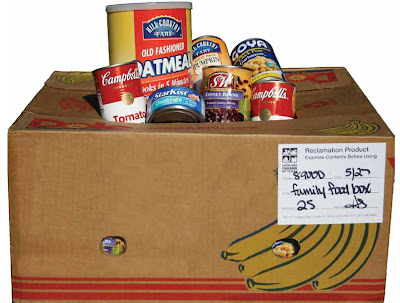 The low hanging fruit in terms of government spending happens to be in its administration of all redistribution programs which on their own also provide an important economic input.
Right now government has opted to merely transfer money and that is administered by the retail market which is obviously the most expensive possible way to do it.   Just as obviously there is no need whatsoever to do it this way.

To start with there is a huge pool of four hour shift work available for the task of packing and delivering weekly food boxes directly to clients.  In fact computerization allows us to even custom pack.  You are not stocking to support random access buying at all but stocking a short list of supplies and delivering them.  Amazon can figure this out and so can anyone else.
In fact contract Amazon to deliver the infrastructure in the first place.
My point is that we swap out all retail markups at the least and allow clients to optimize the food mix for their specific needs..  Throw in ample nutritional advice and support and we will have something that we can be proud of.

In fact this is a viable business plan and worth a huge IPO.  At the very least it can be used immediately to draw down the huge surplus of cheese and butter and dairy.

The Trump administration is seeking to transform the Supplemental Nutrition Assistance Program (SNAP), formerly known as food stamps, which has long been considered one of the essentials of the so-called safety net for impoverished citizens. Under the budget proposal, eligible low-income persons who receive at least $90 a month — or about 80 percent of all SNAP recipients — would receive approximately half of their benefits in the form of a "USDA Foods package." The so-called Harvest package would include "shelf-stable milk, ready to eat cereals, pasta, peanut butter, beans and canned fruit and vegetables." The boxes from the USDA would not include fresh fruit and vegetables, soap, or soft drinks.


Some states began phasing out actual food stamps in the 1990s, replacing them with electronic benefit transfer cards (EBT). In 2008, federal legislation that enacted SNAP eliminated food stamps and replaced them across the government with EBTs. Since then, SNAP beneficiaries receive benefits directly to an EBT card to purchase food and allowed goods. In the past, advocates had decried the use of visible food stamps because of the supposed embarassment on the part of the users.


According to the Trump administration, the move is a "cost-effective approach" with "no loss in food benefits to participants." The federal government asserts that state authorities can deliver food to beneficiaries at a lower cost than what SNAP recipients currently pay for food at retail stores, and reduce the cost to taxpayers. The administration believes that by cutting SNAP by almost 30 percent, the SNAP budget would be reduced by $213 billion over the next ten years.


While the method of delivering the USDA food packages was not clarified in the administration’s budget proposal, the budget said that the 50 states will have "substantial flexibility in designing the food box delivery system through existing infrastructure, partnerships or commercial/retail delivery services."


In December, Agriculture Secretary Sonny Perdue said that he wants the states to have more flexibility in the SNAP program, adding that he wants to see fraud and waste addressed. Perdue said the federal budget has "common-sense reforms that call for greater consistency across nutritional programs." SNAP and other food programs constitute approximately 80 percent of the USDA's budget in the farm bill. In 2016, approximately 44 million people were getting SNAP benefits every month, at an annual cost of $70.9 billion. Nearly two-thirds of them were under the age of 18, over 60, or disabled, according to the USDA.


In an article at the liberal Brookings Institution, writer Lauren Bauer declared:


“SNAP relies on the private sector to provide access to food and beneficiaries to shop according to their needs and preferences. There is little administrative glut; more than 93 percent of SNAP is spent on food benefits. The President’s Budget Request would change the fundamental structure of the program, add costly administrative burden, and restrict the choices of beneficiaries.


“Rather than cutting SNAP benefits or policing the food choices of recipients, it is worth asking: what type of policy reforms to SNAP would in fact reduce food insecurity and increase the likelihood that beneficiaries purchase healthy foods?”


In July 2017, a federal district court sentenced Lakhbir "Lucky" Chahal to federal prison and Tony "Paco" Price to probation for conspiracy to commit wire fraud. Authorities claim that Chahal used food stamp benefits to purchase stock for his stores, Liquor Plus Mini Mart and Paradise House of Liquor. Prosecutors alleged that customers were paid 50 cents on the dollar for their SNAP benefits in exchange for cash and ineligible items such as alcohol and tobacco. According to court records, the total amount of restitution in Chahal's case was almost $1.3 million.


Under SNAP, beneficiaries are allowed to buy unprepared food, such as milk and meat, bread, beans and rice. Items such as soft drinks, soap, toilet paper, and feminine hygiene products are not allowed. In 2016, Rep. Mary Bentley (R) introduced legislation in the Arkansas state legislature to address obesity in the state by banning the purchase of snack foods with EBT cards.


Evidence of fraud and abuse can be found. For example, Spero News found an ad on Craigslist for Atlanta, Georgia, that said, “Hi, I'm looking for someone in the area to get some stamps from. I'm looking for three hundred. Please don't hesitate to contact me if you have some.” a telephone number was provided.
Posted by arclein at 12:00 AM