The Full Text of the Nunes Memo 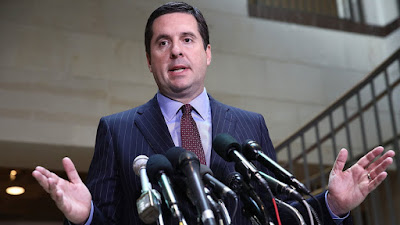 Firstly, there is nothing in this memo that i did not already know or at least surmised.  What this does is attach those hands to the smoking gun.

That the magic dossier was used in this manner was extremely reckless as it was an obvious fraud from the first sniff.  That no other option was available is certainly telling.  In fact, that so much was paid out for it alone informs us that serious fabrication costs were involved.  A tenth as much would otherwise have worked.

In the event, the record shows that the leaders of the FBI, the DOJ and the DNC conspired and colluded to generate falsified evidence and to impact if not damage the incoming administration to say nothing about attempting to wreck the Trump campaign.

This happens to be completely unlawful top to bottom.  It is literally an attempted heist of the presidency.  It is by far the worst scandal in USA history.


The Full Text of the Nunes Memo

On Friday, the House Intelligence Committee released the controversial document, which alleges surveillance abuses by the FBI.

On Friday, the House Intelligence Committee, which is chaired by Republican Representative Devin Nunes, released a four-page memo alleging surveillance abuses by the FBI. Earlier this week, Republicans on the committee voted to make the document public. The classified document has drawn criticism from Democratic lawmakers, who argue it is misleading, as well as from law enforcement officials. In a rare statement, the FBI warned against the document’s release, saying it had “grave concerns” about its accuracy. Despite pushback from officials, the White House approved the release of the memo Friday.3

Below, read the memo in full.

Subject: Foreign Intelligence Surveillance Act Abuses at the Department of Justice and the Federal Bureau of Investigation

This memorandum provides Members an update on significant facts relating to the Committee’s ongoing investigation into the Department of Justice (DOJ) and Federal Bureau of Investigation (FBI) and their use of the Foreign Intelligence Surveillance Act (FISA) during the 2016 presidential election cycle. Our findings, which are detailed below, 1) raise concerns with the legitimacy and legality of certain DOJ and FBI interactions with the Foreign Intelligence Surveillance Court (FISC), and 2) represent a troubling breakdown of legal processes established to protect the American people from abuses related to the FISA process.