Pterosaur-Like Being Seen Over Frankfort, IL 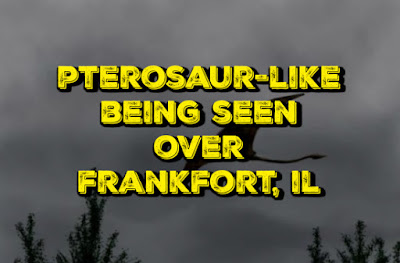 As posted before, the rash of sightings in Chicago brings out old reports never made.  Here is one more.  This continuity across time tends to eliminate alien or non natural arguments.  What has become obvious is that likely thousands of potential reports exist that will never be bebriefed at all.

The Pterosaur is likely a global phenomena. It surely relies on fishing for most of its food and that means going into the water and staying there.  All done at night.

It can nest anywhere, and the skirts of a large remote tree works splendidly.
.

Pterosaur-Like Being Seen Over Frankfort, IL


Almost 30 years ago, when I was a kid, I saw something like this (flying humanoid) in the night sky in Frankfort, Illinois. Frankfort is about 35 miles south of Chicago; and at the time, it was still a fairly rural area. I remember it being larger than a human, and very Pterodactyl-like; as some are describing it.

Over the years, the the memory would pop in my head, about once every few years or so. But I've always pawned it off, that I was just a kid and that my vivid imagination was probably playing tricks on me. Being that I was under 10 at the time, and a kids imagination is very strong.

I've always been a skeptic of the paranormal, and always look for a rational explaination for things like this. However when I first saw the article about the sightings on Facebook earlier this year, this childhood memory immediately came to mind, and I began to again question what I saw.

Because as big of a skeptic as I am of things like this, and with the many things that I have found rational explanations for; there are still about 3 or 4 experiences I've had in my life, that try as I may, I still cannot find a rational explanation for. I could still maintain that my childhood imagination got away from me, but I honestly don't think that's the case after hearing about the 2 sightings earlier this year; which is now up to 55 sightings according to this new article on Vice.com.

After seeing the first article on Facebook some months back, I began to think, that maybe I really did see this thing. On the other hand, I thought that anybody could write a phony article and put it on social media. But if that is the case, then it would be an awfully big coincidence.

A week or two after reading the Facebook article, I told a family member about the article because I once told them about this strange sighting I had as a child. Although the first time I told them of the sighting, I still chalked it up as, it was a long time ago and my mind and memory could be deceiving me. When I told them of the article, they said they saw a recent report on the news that 2 people claimed to see the same thing. Which to me, brings a lot more validity to the article I read.

From what I remember in my experience, I was riding in the back seat of my parent's convertible with the top down one Summer night. I want to say it was in the late 80's or very early 90's. I was laying down in the back seat looking up at the night sky. I couldn't have been more than 7 or 8 at the time. We were on the way to the grocery store, as my dad worked mostly 2nd and 3rd shifts. So we would sometimes get groceries at night. As we drove down the road, I remember seeing this large dark creature swoop past overhead. From what I remember, it was flying perpendicular to the direction our car was traveling.

I don't remember exactly how low it was flying, but it was low enough for me to discern that it was larger than a person, and it had an enormous wingspan. It was soaring open-winged like a hawk would fly. It blended with the night sky pretty well, and was directly above and perpendicular to the car, so I was the only one in the car who saw it.

When I originally told my parents about it years later, they said they don't remember this happening, so I assume they did not see it. As they were looking at the road, and I was looking up in the sky.

I don't remember being startled by it, and I know I did not make any noise or scream because my parents do not recall the experience at all. I remember being intrigued by it, because I was into dinosaurs as a kid, and it very much reminded me of a Pterodactyl. I was old enough to know it's not something you see every day; but still young enough to not question whether or not something like that should exist. I had no concept yet of what "paranormal" was, and therefore, was not scared of it.

Again, I am a very rational person, and always look for a logical explanation with things like this. I am not saying that it did happen for certain. There is still a chance that I could have just imagined the whole thing. Maybe my mind is just reconstructing an old memory of what I "thought" I saw as a wildly imaginative kid. However since seeing that first article, and hearing about other people's accounts of it, and reports of it on the evening news; I'm leaning more towards that my memory serves me correctly on this one.

Ever since then, I've felt a compelling urge to reach out and tell someone that I think I saw the same thing too. This is my reason for contacting you. Because you are collecting accounts of this creature being sighted, and I wanted to see who else has seen this thing. And maybe we could all feel less crazy about what we saw. (witness wishes to remain completely anonymous)
Posted by arclein at 12:00 AM