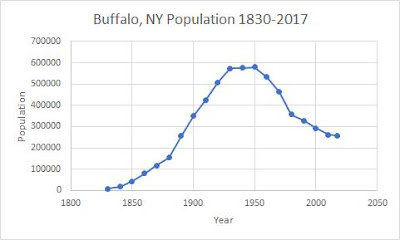 In fairness, plenty of buildings were also abandoned as well.  All this happened because the affluent left those cities to live in adjacent suburbs because of the car and proper road systems supporting those suburbs.

I am now seeing a reversal of this trend in Vancouver in particular.    There the building of a train subway system has allowed the city to densify around the Stations.  Now at least ten thousand suites are made available at these locations.  All this increased the population in the downtown core while eliminating infrastructure ready to be abandoned.

This pattern is now been adopted by many other cities as it increases the tax base and supports local businesses and common facilities.
.
Mitchell Langbert
This is a picture of the population of Buffalo, New York from 1830 to 2017. In 1949, Congress passed the American Housing Act. According to Wikipedia, "It was a landmark, sweeping expansion of the federal role in mortgage insurance and issuance and the construction of public housing." The Housing Act was supposed to be a support to cities. It was the chief "urban renewal" law. Encyclopedia.com ( http://www.encyclopedia.com/…/unit…/us-history/urban-renewal ) adds:
Sites were acquired through eminent domain, the right of the government to take over privately owned real estate for public purposes, in exchange for "just compensation." After the land was cleared, local governments sold it to private real estate developers at below-market prices. Developers, however, had no incentives to supply housing for the poor. In return for the subsidy and certain tax abatements, they built commercial projects and housing for the upper-middle class.
Robert Moses was a leader in eminent domain actions going back to the 1930s. The sponsor of the law was Moses's friend and fellow Yale graduate, Senator Robert Taft. Taft had alerted Moses as to the passage of the law, and Moses saw a state law passed that increased his own power to oversee the urban renewal programs in New York.
The year before urban renewal went into law, signaling increased federal government involvement in the economy, Buffalo's population peaked. Its population, along with most other upstate New York cities, has declined ever since the law went into effect.
Posted by arclein at 12:00 AM