Scandal, Corruption, Lawbreaking — And So What? 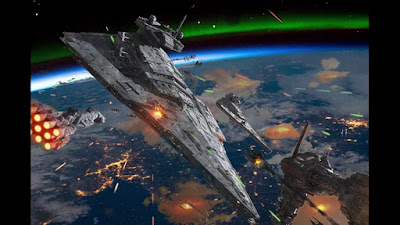 I am sorry folks, but this article is not from the alt right but from the well established National Review and certainly cannot be ignored.  After months of steady disclosure against a wall of Dem protest and denial we have here all the ugly.

It is all as bad as might be imagined.  Yet it is still all about the behavior of political actors and politicized actors surrounding the Obama Administration and their failed 2016 campaign to essentially override the inconvenience of the Constitution.


The reason it is not 'so what' is that Trump won.  Better he came weaponized himself with excellent Intel and critical support from the Legions and in particular the Praetorian Guard.


He has allowed all who are stupid to hang themselves over the past year while every conversation was listened to.  Now they will all be renditioned to GITMO as enemy combatants out of the reach of their lawyers to share their knowledge.


Astonishingly, the civilian aspects of the enforcement powers of the Republic, politicized and integrated with the Global pedophile natural conspiracy for personal profit.  This included leadership of the CIA, the DOJ and the FBI.  The scope of the treason is impossible to grasp.


The take down was massively planned and organized and is ongoing today.  I do think that it can no longer be turned back.  We are certain that the Navy, the Marines and most aspects of military Intel is fully involved at the highest levels. This will include the Space Fleet as well as protector.  Other units are likely out of the information loop but can be keyed up as needed.

Scandal, Corruption, Lawbreaking — And So What?

What is the endgame to never-ending wrongdoing? The FISA-gate, Clinton emails, and Uranium One scandals are sort of reaching a consensus. Many things quite wrong and illegal were done by both Hillary Clinton and her entourage and members of the Obama agencies and administration — both the acts themselves and the cover-ups and omissions that ensued.

Remember, in the FISA-gate scandal such likely widespread criminal behavior was predicated on two premises: 1) certainty of an easy Clinton victory, after which the miscreants would be not only excused but probably rewarded for their zeal; 2) progressive hubris in which our supposedly moral betters felt it their right, indeed their duty, to use unethical and even unlawful means for the “greater good” — to achieve their self-described moral ends of stopping the crude and reactionary Trump.

The wrongdoing probably includes attempting to warp a U.S. election, Russian collusion, repeatedly misleading and lying before the FISA courts, improperly surveilling American citizens, unmasking the names of citizens swept up in unlawful surveillance and then illegally leaking them to the press, disseminating and authenticating opposition smears during a political campaign, lying under oath to Congress, obstructing ongoing investigations, using federal funds to purchase ad hominem gossip against a presidential candidate, blatant conflicts of interests, weaponizing federal investigations, trafficking in and leaking classified information . . . The list goes on and on.

The State Department is now involved. Apparently anyone who was a former Clinton smear artist can pass fantasies to a sympathetic or known political appointee at State. And if the “dossier” fits the proper narrative and shared agenda, it gains credence enough to ensure that it is passed up to senior State officials and on to the FBI.

Perhaps a private citizen with a grudge against a rival should try that as well. These scandals will grow even greater before various congressional investigations expire. Next Up The 25th Amendment Won't Oust Trump 01:22 But then what?

In some sense, we are in uncharted territory — given the misadventure of appointing Robert Mueller as special counsel. His team is now replaying the role of Patrick Fitzgerald in the Scooter Libby case: investigating a crime that did not exist and that even if it did was committed by someone else.

The Mueller team’s likely parachute will have little if anything to do with the Russian collusion that it originally and chiefly was appointed to investigate. Instead, it’s likely to settle for perjury and obstruction charges against peripheral Trump officials (if the cases are not thrown out by possible reliance on tainted FISA transcripts).

The indictments may gain a little traction if they are timed to be released before the midterm elections, hyped in the mainstream media, and calibrated to be tried before liberal D.C. juries. The investigation may seek some redemption or justification if it criminalizes the secretly taped bombast of a Trump family member, catching him in some sort of perjury trap or business misdeed. Yet Mueller’s appointment makes resolution of FISA-gate and its associated scandals more difficult to resolve. His value for the Left is not in what he will find but that his mere presence will become an argument ipso facto for never again appointing anyone like him.

It is unlikely that Rod Rosenstein will demand to see whether Mueller, after almost nine months, has actually found much evidence of collusion.

Nor is Rosenstein apt to order Mueller to cease a mostly dead-end investigation and redirect it along a freeway of Clinton-Obama-connected collusion, obstruction, and fraud.

(Read the Page-Strzok text archive to see why the present weaponized bureaucratic culture in D.C. is utterly incapable of disinterested inquiry.) Still, Democrats at some point will see that what they thought was the formerly defensible is now becoming absolutely indefensible.

Adam Schiff, after months of leaking, making grandiose false statements on cable TV, and getting punked by Russian comedians, is now a caricature. He became the sad legislative bookend to the neurotic James Comey. Schiff will probably soon be forced to pivot back to his former incarnation as a loud critic of FISA-court abuse.

Those who still persist in denying the extent of clear wrongdoing will suffer the tragicomic fate of Watergate-era Representative Charles Sandman (an authentic World War II hero) and Rabbi Baruch Korff (who as a child fled Ukrainian pogroms).

The last diehard supporters of Richard Nixon as he faced impeachment, they both ended up widely discredited because of their political inability or personal unwillingness to see what was right before their eyes. After all, professed civil libertarians, hard-hitting investigative reporters, and skeptics of nontransparent and overreaching federal agencies are now insidiously defending not the just the indefensible, but what they have claimed to have fought against their entire lives.

Woodward and Bernstein in their sunset years have missed the far greater scandal and in their dotage will likely nullify what they once did in their salad days. If the economy keeps improving, if Trump’s popularity nears 50 percent, and if polls show the midterm elections still tightening, we should see the politics of Democratic equivocation sooner rather than later. So what would be their terms to call it all off?

I think the Democratic fallback position will be to point to the career carnage at the FBI and DOJ as punishment enough.

Such career implosions do not happen without cause. And if that is not enough, Democrats may further tsk-tsk that if there were perhaps zealotry and excesses, they were in the distant past.

An out-of-office Susan Rice, Ben Rhodes, Samantha Power, James Clapper, John Brennan — and Barack Obama — may have stepped over the line a bit in matters of surveillance, unmasking, and leaking. But do we really wish to go back and put another administration on trial, politicizing governmental transitions? And if that is not enough, Democrats will also shrug that the collusion mess was analogous to another Republican Benghazi hearing: lots of embarrassing smoke of “what difference does it make” admissions, but little fire in proving beyond a shadow of a doubt that the main players engaged in prosecutable crimes. And if that is still not enough, Democrats in extremis may concede that Mueller could retire with his minor scalps, and both sides then could call it quits, even-steven.

Who knows, perhaps they will say that Christopher Steele had a history with Russian oligarchs and was using his paymaster Hillary Clinton as well as being used by her?

Accepting any of these obfuscations would be a grave mistake. Despite a nonstop media assault on Trump’s administration, Representative Devin Nunes, and the congressional investigative committees, more than 50 percent of the public already believes that the Trump campaign was illegally surveilled and smeared through the confluence of the Clinton campaign, the Obama administration, and the FBI.

Voters would only grow more cynical if some Americans were allowed to abuse constitutionally protected civil liberties, and to lie to the Congress, the FBI, and the courts, while the less connected others go to jail for much less.

Without a judicial accounting, it will be impossible to clean up the hierarchies of the FBI and the DOJ. Indeed, absent accountability and punishment, the new modus operandi would be for any lame- duck incumbent administration to use federal agencies to enhance the campaign of its own party’s nominee.

It would be only logical to conclude that criminal acts used to help a successor would be forgotten or rewarded under the victor’s tenure. Voters would only grow more cynical if some Americans were allowed to abuse constitutionally protected civil liberties, and to lie to the Congress, the FBI, and the courts, while the less connected others go to jail for much less. What is needed? Attorney General Sessions must find muscular, ambitious, and combative prosecutors (preferably from outside Washington, D.C., and preferably existing federal attorneys), direct them to call a Grand Jury, and begin collating information from congressional investigations to get to the bottom of what is likely one of gravest scandals in post-war American history: the effort to use the federal government to thwart the candidacy of an unpopular presidential candidate and then to smear and ruin his early tenure as president.

Only another prosecutorial investigation, one way or another, will lead to resolution, take the entire mess out of the partisan arena, and keep the anemic Mueller investigation honest — with the full knowledge that if its own investigators have violated laws or used tainted evidence or in the past obstructed justice, then they too will be held to account.

Read more at: http://www.nationalreview.com/article/456354/fisa-scandal-clinton-obama-corruption-lawbreaking-whats-next-prosecution
Posted by arclein at 12:00 AM