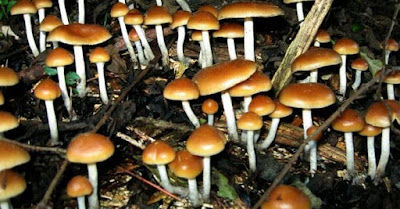 This needs to be deeply understood because this happens to be a positive shift in world view and it is not dependent on a sustaining dose either..  For the first time we have an active dose that could be applied universally to a whole population at least one with the expectation that there would be a measurable shift in social attitudes that i suspect would be for the better.

We can vaccinate against authoritarian creeds that once again are emerging as a serious and present threat to humanity once again in the form of the NWO.
I do think we need to seriously experiment with this to shake out our options and do it with large groups.  Curiously i would use a community of the Amish as a control and as closest to a stable human society.  Another control of an inner city population and an urban population also recommends itself.  We may well be able to construct several controls against which we use the modified population to shed a moving light upon.
.


Dr. Robin Carhart-Harris, Head of Psychedelic Research at the Centre for Neuropsychopharmacology, Division of Brain Sciences, led a small investigation into the effects of mushrooms on seven individuals with treatment-resistant depression (TRD). The results, titled “Increased nature relatedness and decreased authoritarian political views after psilocybin for treatment-resistant depression,” were published last week in the Journal of Psychopharmacology.


Citing previous research showing psychedelic use can alter personality traits, attitudes, and beliefs, Carhart-Harris and Ph.D. student Taylor Lyons set out to examine changes in attitudes toward nature and politics. According to their summary, they “compared the effects of psilocybin on nature relatedness and libertarian–authoritarian political perspective in patients with TRD versus healthy control subjects.” Patients who received psilocybin treatment each had two doses a week apart.


The participants’ views were all evaluated “at baseline and then again at the 1 week and 7-12-months follow-ups” using a Libertarian-Authoritarian political survey, as well as a nature-relatedness survey.


The study authors found that with regard to nature-relatedness, their “results suggest that psilocybin therapy increases the subjective sense of connectedness to nature 1 week after treatment, and that these effects are sustained for at least 7–12 months.”


“Before I enjoyed nature, now I feel part of it. Before I was looking at it as a thing, like TV or a painting… [But now I see] there’s no separation or distinction, you are it,” said one participant.


They also found that one week after treatment, dosed subjects with TRD “had depressive symptoms were significantly reduced to levels more comparable with controls.”


Further, “Patients showed a significant decrease in authoritarian political perspective 1 week after psilocybin treatment,” the authors summarized, noting that “results suggest that psilocybin therapy may persistently decrease authoritarian attitudes post-treatment with psilocybin.” They cautioned against drawing any definitive conclusions and advised that “further research is required to test the robustness of this relationship.”


Carhart and Lyons advocated more investigation for reasons including the small sample size of their study, the potential of other factors besides psilocybin to influence the results, and gender disparities between the TRD and control groups (there were more men in the TRD group and more women in the control group).

Nevertheless, they pointed to the historical relationship between psychedelic use and breaking away from authoritarian beliefs, also citing the relevance of their most recent study:


“Psychedelic drug use in the 1960s and 1970s was strongly associated with anti-establishment and egalitarian counter-culture movements (Nichols, 2016), yet very little controlled research has investigated the link between psychedelic use and political perspectives. Here we show for the first time, in a controlled study, lasting changes in political values after exposure to a psychedelic drug. This is in line with early research showing that recreational LSD users score higher on attitudes of ‘personal liberty’ and ‘foreign policy liberalism’ than control subjects.”
Posted by arclein at 12:00 AM