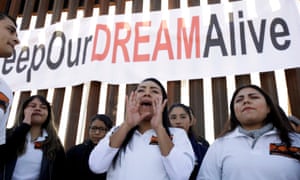 This appears to be a welcome start on resolving the whole problem.  It is also the low hanging fruit.  after all this chaps have already been educated into Americans.
Recall that almost all illegals are working here in one way or the other.  For that reason we need to establish a guest worker system that allows these folk to earn citizenship over say twenty years instead of ten years.  Obviously their kids would grow up to be Americans and thus enter the work force as well.
The wall needs to be built to choke of contraband so long as we sustain the drug war.  Otherwise illegals will simply find other ways in that will likely be safer.
I would send them first to forest grooming work camps until recruited as a guest worker. In Canada that means black flies and mosquitoes in summer and severe cold in winter.  Yet the demand is clearly there for guest workers who will take on jobs avoided by even the unskilled who have the option.
I also know how to end poverty and that can be profitably applied world wide to end the entire problem forever...
Trump proposes path to citizenship for 1.8m undocumented youths

President offers plan in exchange for border wall investment and crackdown on other undocumented people, among other measures

Donald Trump proposed legislation that would provide a pathway to citizenship for roughly 1.8 million young, undocumented immigrants in exchange for a significant investment in a border wall, a crackdown on undocumented people and sweeping changes to family-based migration policies.

The president’s new framework was outlined by the White House on Thursday amid anticipation on Capitol Hill, as immigration advocates braced themselves for potentially “radical” demands from the president in return for support for the so-called Dreamers.


According to the memo provided by the White House, Trump’s proposal would not only grant a conditional pathway to citizenship for the 700,000 Dreamers, who gained temporary legal status under an Obama-era program and whose fate has been hotly debated for months, but also a much broader group of those who were brought to the US illegally as children. Under the plan, the immigrants could become citizens over a 10 to 12 year period if they met certain requirements and maintained good standing with the law.

The Trump administration is demanding a $25bn “trust fund” to construct a wall along the US-Mexico border and upgrade security at ports of entry and exit along the country’s northern and southern borders.


The proposal places significant restrictions on family-based migration, limiting the family members on whose behalf US citizens could petition to spouses and children, ending categories for siblings and parents. It also calls for the elimination of the state department’s diversity visa lottery, which helps citizens of countries with historically low rates of immigration to come to the US.

Lawmakers have spent weeks in complex negotiations on immigration that prompted a shutdown of the federal government earlier this week.


Democrats and immigrants’ advocates immediately rejected the plan, arguing that it represented an attempt by the administration to seal the country’s borders, while immigration hardliners excoriated Trump for embracing “amnesty”.

“Time to burn your #MAGA hats,” tweeted David Kirkorian, executive director of the conservative Center for Immigration Studies and a prominent anti-immigrant voice.

Senator Dick Durbin, a Democrat of Illinois who has been at the center of the bipartisan negotiations over an immigration plan, accused the administration of holding Dreamers “hostage” in a “crusade to tear families apart and waste billions of American tax dollars on an ineffective wall”.

The Congressional Hispanic Caucus said in a joint statement: “The White House is using Dreamers to mask their underlying xenophobic, isolationist, and un-American policies.”

And representative Luis Gutierrez of Illinois said: “$25 billion as ransom for freeing Dreamers recipients doesn’t pass the laugh test. It would be far cheaper to erect a 50-foot concrete statue of a middle finger and point it towards Latin America.”

A handful of conservative Republican senators announced their support for the bill. Senator Tom Cotton, a Republican from Arkansas who supports vastly reducing legal immigration, called the plan “generous and humane” and said it should serve as the basis for bipartisan legislation in Congress.

The news came one day after Trump said he would support an immigration plan that would enable Dreamers to “morph into” American citizens over a period of 10 to 12 years, though at that point it was widely understood he was referring only to the 700,000 whose futures he has put in the balance.

“Whatever they’re doing, if they do a great job, I think it’s a nice thing to have the incentive of, after a period of years, being able to become a citizen,” Trump said on Wednesday.

The president’s comments were treated with cautious optimism by some lawmakers and wariness from others, as his views on immigration have whipsawed.

Lawmakers have spent weeks in complex negotiations on immigration that prompted a shutdown of the federal government earlier this week.

“I have never felt better about our chances of finding a solution on immigration,” Lindsey Graham, a leading sponsor of legislation granting legal status to Dreamers, said Wednesday.

Last September, Trump announced plans to rescind an Obama-era program, known as Deferred Action for Childhood Arrivals (Daca), which enabled qualifying young, undocumented immigrants to obtain temporary legal status to work or study in the US and be temporarily protected from deportation.

Trump gave Congress a deadline of 5 March to replace Daca through legislation and has called for any package to also include strict border security measures and reforms to other immigration programs.


Senator Ted Cruz, a Texas Republican, said: “I think it would be a serious mistake for Congress to pass legislation that granted amnesty and a path to citizenship for those here illegally ... It’s not honoring the promises we made to the voters.”


Some staunch conservatives suggested there was a distinction, however, between Dreamers and other undocumented immigrants.

“The people who are in the Daca program were brought here as minors, through no fault of their own, before the age of accountability,” Cotton told reporters.


Cotton wants to do away with a lottery program that allocates visas to immigrants from underrepresented countries.

That program was the source of Trump’s controversial suggestion in a private meeting earlier this month that the US should not accept immigrants from parts of Africa and South America, which he referred to as “shithole countries”. “Trump and Stephen Miller think they can exploit the desperation of Dreamers – whose lives were upended by ending Daca – to enact their nativist wishlist,” said Frank Sharry, the founder and executive director of America’s Voice, a progressive immigration advocacy group. “We’re not going to roll over.”
Posted by arclein at 12:00 AM