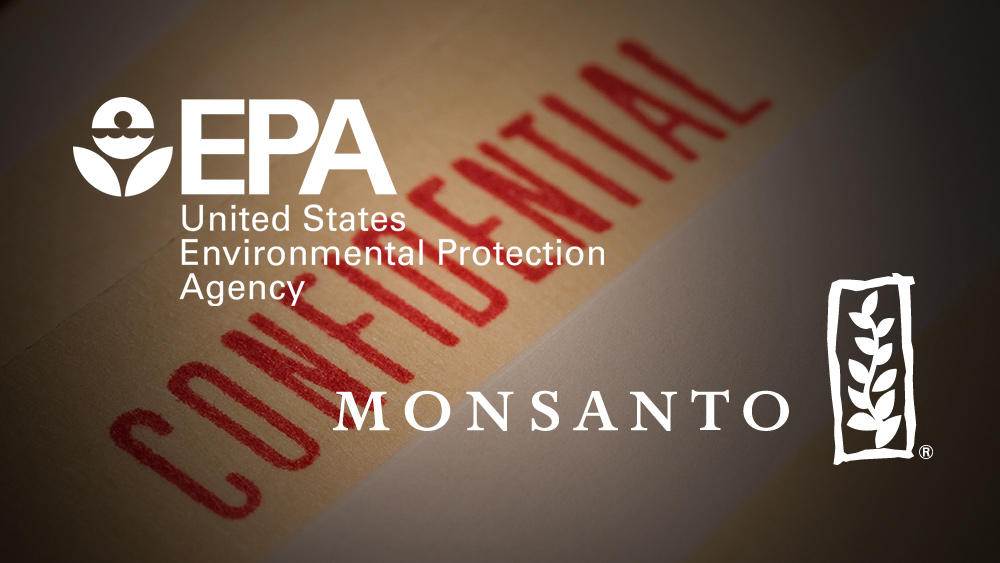 What will happen when Trump cleans house here?  The science has been suppressed for decades.

That science will continue to be suppressed by whatever means possible..
We need to legislate a clear tiered regulatory regime.  A trial tier can be allowed limited to special applications by licensed users.  This state should continue for twenty years or so long as necessary to produce properly collected meta data by independent researchers that show no issues.
It really does take twenty years.  In the case of roundup we now have a situation in which the product has been massively dumped into the environment for the past twenty years while the rising death toll among users has not been addressed at all.
Far too many farmers are retiring to a cancer ward.

(Natural News) A new release of emails between Monsanto and senior officials at the Environmental Protection Agency (EPA) reveal deep collusion and a forceful effort by Monsanto to halt a safety review for their top-selling herbicide, Roundup.

The email communications, uncovered by a Freedom of Information Act request, revealed Monsanto’s forceful influence over the EPA and showed just how far they will go to control the science. In the communications, EPA officials worked with Monsanto to delay a toxicology review on glyphosate that was supposed to be conducted by the Agency for Toxic Substances and Disease Registry (ATSDR), which is part of the U.S. Department of Health and Human Services (HHS).

The collusion began in early 2015, back when the World Health Organization’s International Agency for Research on Cancer (IARC) had declared Roundup’s active ingredient, glyphosate, a “probable human carcinogen.” The IARC findings infuriated Monsanto; the corporation stands by their claims of glyphosate safety. With lawsuits coming down on them, Monsanto senior officials knew that something had to be done to make glyphosate appear safe again in the public’s eye. Monsanto feared that ATSDR might have similar concerns about the carcinogenicity of glyphosate, so Monsanto officials used their connections at the EPA to put a stop on the toxicological review.

The emails reveal that EPA officials kept in contact with Monsanto and even updated them on their progress for halting the ATSDR toxicological review. The emails detail how Monsanto tries to cover up scientific review of their agrichemicals, vindicating lawsuits that allege Monsanto tried to cover up glyphosate’s evidence of harm in cancer cases.

Since glyphosate plays such a large role U.S. agriculture and lawn care, and with IARC classifying the herbicide a “probable carcinogen,” it was absolutely essential for ATSDR to publish a review on the widely used herbicide. In February 2015, the agency promised a toxicology review on glyphosate by October 2015, but it was halted and no toxicological profile has been published to date. We now know why this happened, with emails revealing Monsanto’s pressure to stop it.

Jess Rowland, former deputy division director within the health effects division of the EPA’s Office of Pesticide Programs (OPP), retired in 2016 after communicating to Monsanto her desire to kill the ATSDR review. According to the email dump, Rowland is not the only high level EPA official working with Monsanto to stop the toxicology review. At the behest of Monsanto, a consortium of EPA officials aggressively pressured the ATSDR and HHS, claiming that a toxicology review on glyphosate is unnecessarily “duplicative” because the EPA was putting their own review together. Not surprising, the EPA’s assessment in 2016 refuted IARC’s scientific proof that glyphosate was a probable carcinogen.

One of the Monsanto collaborators is Michael Dykes, long time vice president of government affairs for Monsanto. He was in direct communication with Jim Jones, the EPA’s Assistant Administrator for the Office of Chemical Safety and Pollution Prevention, which had oversight on the EPA’s Office of Pesticide Programs (OPP). In the beginning, Monsanto’s Dykes questioned the EPA’s Jones on the ATSDR review: “You were not aware of their review. Did you learn anything more about their efforts?”

OPP Director Jack Housenger kowtowed to Monsanto repeatedly through the email communications, bending over and doing as Monsanto wished. Trying to suppress the ATSDR review, Housenger pressed “whether this is a good use of government resources.” At first, officials with the ATSDR review didn’t bend. ATSDR division director James Stephens wrote back saying their review overlaps the EPA’s review “but isn’t totally duplicative…”

Monsanto’s chief scientist William Heydens was very forceful in the matter, convincing EPA officials to bury any ATSDR review. ATSDR officials said their review was distinguishable and not duplicative but agreed with Housenger not to make a call on glyphosate’s carcinogenicity. When Housenger confirmed to Monsanto that the ATSDR was backing off the review, Monsanto’s William Heydens menacingly replied, “Distinguishable and not duplicative’? Seriously? And I will believe the not ‘making a call on cancer’ part when I see it. Anyway, at least they know they are being watched, and hopefully that keeps them from doing anything too stupid…”

For a more complete breakdown of the emails, visit US Right to Know and stay informed at Glyphosate.news.