Was the Amazon Rainforest Once Home to A Massive Lost Civilization? 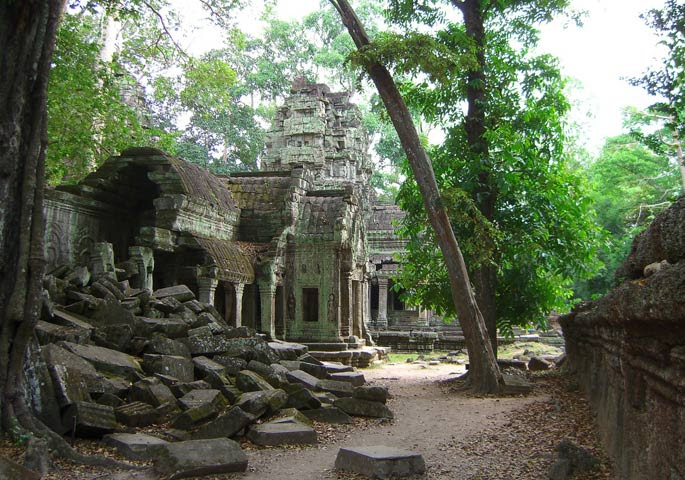 The empty amazon theory all depended on one grave error and that it was impossible to operate continuous agriculture in the amazon.   As it turns out that is completely false.

Agriculture based on bio char supported soil husbandry is proving all that wrong.   Huge populations were in fact maintained throughout the Amazon.  This collapsed with the onset of old world diseases and the steel axe as well.  Suddenly escape and slash and burn provided real security .


The population quote is way too low.  The bio char protocol supported small garden plots quite able to support a family all year.  Corn was also grown to produce a store able source of reserve food and taxes.  Otherwise the stalks provide feed-stock to produce ample char.

Was the Amazon Rainforest Once Home to A Massive Lost Civilization?

There is a hill in the Amazon rainforest that stretches out over two acres of land. It is called Montegrande and, to look at it, it seems like nothing more than another hill. A particularly steep one perhaps, but nothing more than an overgrown mound of earth. For centuries, it was ignored, and, in time, as Peru’s cities and towns stretched further out in the Amazon, farmers even set up their homes on top of it.

Their homes became an archaeological site. In 2010, archaeologist Quirino Olivera and his team started digging into the Montegrande hill, and soon discovered what they were excavating wasn’t a hill at all. It was a massive pyramid, built by a forgotten civilization in the Amazon rainforest – and it was over 3,000 years old. 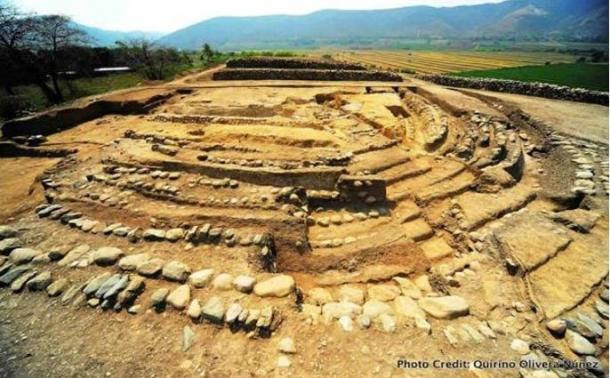 The pyramid at Montegrande changed everything. Here, for the first time, was hard proof that ancient civilizations had thrived in the Amazon rainforest.

Ancient civilizations had certainly flourished in South America, but, up until recently, it had been believed that the Amazon itself was a place few dared to tread for long. The few people who lived there in ancient times, archaeologists believed, were sparsely separated, nomadic people. They would wander from place to place, setting up the odd short-lived farm before moving on.

When the Spanish conquistadors arrived in South America, they wrote stories about massive towns in the Amazon full of farms and supporting whole fleets of boats – but there’d never been anything to back up what they were saying. Every piece of archaeological evidence we could find suggested that no one in the Amazon had stayed still long enough to build a home.


Discoveries like Montegrande, though, are changing the history of a nation. Now it’s believed that, at its peak, there may have been as a many as 5 million people living in the Amazon. They built civilizations and cultures that are completely forgotten to time. The only way we’ll ever know who these people were is by sifting through their bones. 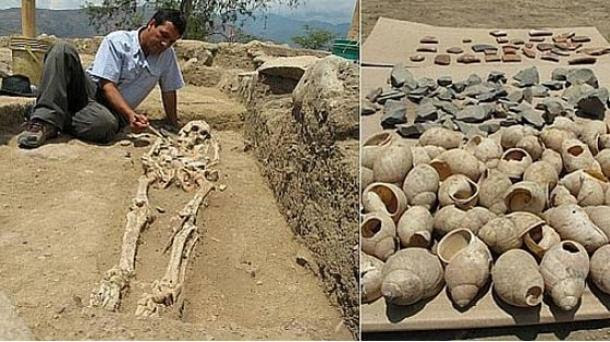 The people who built the Montegrande, the archaeologists have since learned, had an incredibly sophisticated society. They didn’t just build one pyramid and leave. They first built it in 1,000 AD, but they reworked it and rebuilt it at least eight times. Before their empire ended, they had lived in that one spot for more than a thousand years.

By the end, they were building six-foot (1.83-meter) walls to protect their people and setting up offices where rulers governed their people. They built a grid of homes across the riverbank, had an elaborate religion of their own, and were part of an elaborate trade network the stretched across modern Peru.

They have a whole millennium of history that’s only hinted at in their remains. What we know is only scraped together from their ruins, but the massive pyramids they left behind are enough to give an incredible glimpse into their religion. 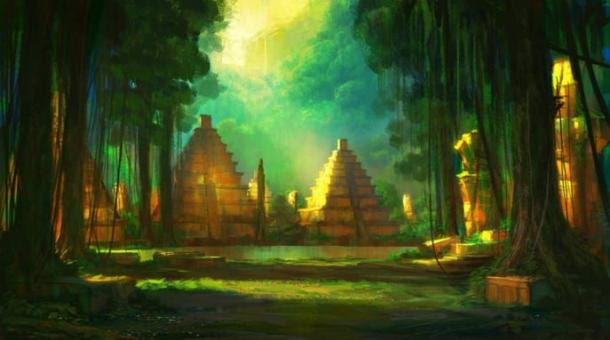 Illustration of ancient city in the Amazon, licensed for reuse. ( TheRavens)

At the top of the mound is a spiral of rocks, coiled in the shape of a massive snake or, perhaps, in the swirl of the shell of a snail. You could walk along the spiral like you were making your way through a labyrinth. Every step would take you further down below the ground until you reached the center, forty feet (12.19 meters) below the first step.

At the center of the spiral, the people who once lived here burned fires. These were likely sacred fires, used for some religious purpose – and there’s reason to think it involved drugs.

Archaeologists have found snuff spoons and mortar grinders still holding the residue of hallucinogenic vilca seeds. These seeds didn’t grow where they lived – they were imported, and getting their hands on these things might just be the reason this civilization created such an elaborate trade network. 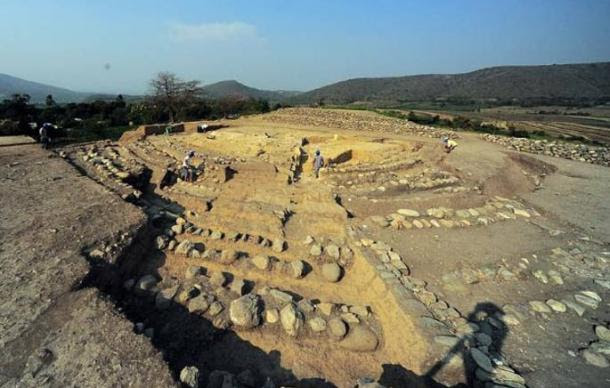 The seeds, Olivera believes, just might be the reason they had a fascination with spirals. People who take these seeds tend to hallucinate lights flashing in the shape of a spiral. The priests who lived here may have taken it for a divine vision, and that hallucination might have changed their entire culture.
Spirals were an obsession for the people who lived here. Inside the remains of their civilization, there are still snail shells scattered everywhere. Honored dead were covered in them when they died, and the shape fills every part of their society. God, they seemed to have believed, was something they could reach when they crushed up vilca seeds and freed their minds. 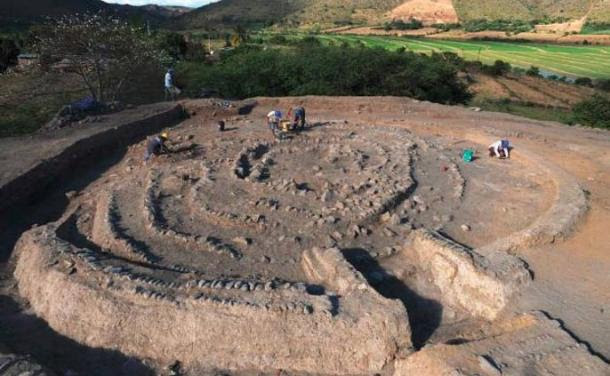 The Lord of Snails

A mile away from Montegrande, the researchers found a second pyramid – but this one tells a far darker tale.

Buried in the second pyramid were the remains of 22 children. Many of their bones showed signs of malnutrition and sickness, and it seems that they were withering away when they died. Likely, they were brought here when they were ill and sure to die. This was a place apart from the city where a mother could leave her beloved, dying child with the shamans.

The shamans wouldn’t cure them. They didn’t have a magic potion to bring these children back to health. The children brought here weren’t helped – they were made into human sacrifices. 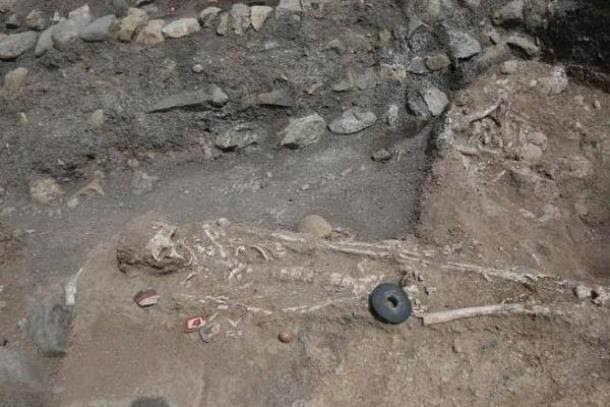 The bones of the children appear to have been brutalized. A six-year-old is buried there with his pet guinea pig, while a young mother lies there with her newborn child, both decapitated.

Then, apart from them all, are the bones of the priest who sacrificed them. The archaeologists call him “The Lord of Snails”, and he must have been important. He died 2,800 years ago, fairly early in their history, but still has the most glamorous burial site they’ve found.


The Lord of Snails was buried covered from head to toe in 180 snail shells. His face is looking up to the east, toward the rising sun, and toward a new day. 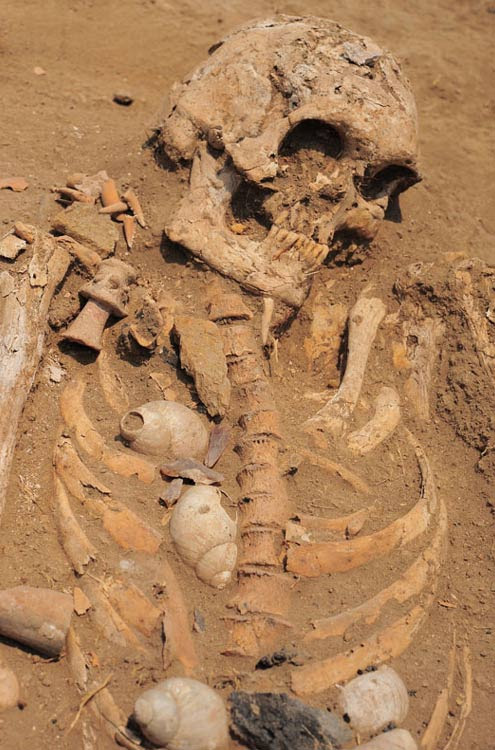 The Lord of Snails. (forosperu)

A Life in Ruins and Bones

Not a single word written by the people who lived here remains. If they were literate at all, we do not know or have what they wrote. We do not know their names. We do not know their thoughts on life and love and death, or why they came to the Amazon, or why they fell one day.
.
Up until now, we didn’t even know they existed, or that there were any ancient civilizations in the Amazon at all. All we have are their ruins and their bones – but even that is enough for an incredible portrait into the lives of a people who have been forgotten for the past 2,000 years.