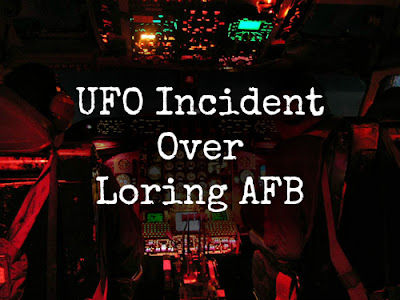 This is particularly unusual. What makes it unusual is not the UFO event itself or its long lasting interaction, but that the air-force did react and it did something as well that was completely non conventional.

This should be better classified as an unknown air force behavior.  We certainly do not know what it really means.


Yet it does confirm UFO nuclear interest in 1975 as often reported.


In a 2013 video released by Michael Wallace, a KC-135 pilot tells a story from 1975 at Loring AFB, Maine about his UFO encounter during a return flight back to base after air-to-air refueling:


“I'm going to tell you a really incredible story that I have first-hand information on. The story begins at Loring Air Force Base and northern Maine near Limestone back in 1975. The 42nd Bomb Wing consisted of two air fueling squadrons and a bomber squadron. The mission was to support emergency war orders armed with nuclear weapons. I'd like to give you some background about the UFOs over Loring before we get into the details of the formation flight.


A couple of weeks or maybe even as few as a couple of days before this particular formation flight, a meeting was called by the 42nd Bomb Wing for all the flight crews...all three of the flying squadrons to be held with the alert facility. This was unusual. It was first time that it happened for me and all the time that I had been there so I was kind of curious as to what this is going to be about. So at the beginning of the meeting a uniformed Major says "listen if you don't have the security clearance of at least secret you need to leave." There's only a couple people that got up of a couple hundred people that were there. That Major started off by saying "if you haven't heard, there has been a UFO reported over the base"...over the nuclear-armed B-52s that are on alert over the nuclear weapons storage facilities that had nuclear weapons stored at them at this time. So it was a very serious situation and that's what this meeting was all about. "It's hovering without making any sound. It does have a few lights. It can move very quickly, unconventionally, rapid straight-line movements with straight vertical movements, turn with the without any apparent radius in the turn. So it's a pretty incredible technology. The wing staff is pretty concerned about it so they have notified SAC headquarters and we were told, don't talk to anybody about it. If you have one of these incidents. You can talk to us and a have a debriefing but outside of this room, don't talk about it. We're also concerned that the local press is going to get wind of all the extra ground forces and the fighters that we're bringing in to help us deal with this issue, so we're going to tell them that that there's a Canadian helicopter crossing the border and harassing us. So I think that's pretty incredible, but that's the background for the story that I'm going to tell you."


We had departed Loring earlier in the day. It was a nighttime refueling mission. There were three KC-135s in this formation. I was the aircraft commander on the number two aircraft in this three airplane formation. Tanker formations were referred to as 'cell flights.' There was a lot of vertical separation, a lot of horizontal separation. There was none of this high flying like the fighters do, this kind of stuff. Now we were way, way vertically clear, I think, a thousand feet, and I don't know, half mile, maybe, you know, so it wasn't very much fun. It was just kind of boring actually to be in a formation flight and tanker, however, the mission was pretty routine. I don't remember. It was unremarkable in almost every way until we started back and that's where the fun begins, that's where the action happens.


So we are coming back from a refueling mission somewhere south of New York offshore a little ways and I believe it was with F4 Phantoms. Just a routine training mission for both the Phantom's and for us, so as we are somewhere close, I think somewhere between Bangor and Portland, northbound coming back to Loring Air Force Base. The command post at Loring contacted us which was not routine but not completely out of the ordinary. But when they asked the aircraft commander of the cell leader, the aircraft commander of the number one tanker, to change radio frequencies to standby, they had an important radio call that they wanted to talk to him about. That was pretty unusual. So it didn't take me long to say, "hey, you know, I think one of my spare radios is good so let's see what this guy is going to get briefed on." So I tuned in. Number three tanker, probably with the same curiosity, he did the same thing, I'm sure. And we're listening to the command post telling the cell formation leader, "Listen, the UFO is over the base again, right now, and we want you to pass off the leadership of the formation of the cell flight, to the number two aircraft, and then we want you, then, for one aircraft, to turn your lights out too, radios off and head straight to the base at your own discretion, out to airspeed, path whatever, at your own discretion"...which is unusual, very unusual to hear that. Incredible, as a matter of fact, so I was quite shocked.


So the cell leader acknowledges and says, "Will do." So the next thing you know, I'm getting a call from him. He's contacted me and said, "Listen, I just got special orders, I have to depart the formation. You're going to take over leadership of the cell. Let the navigators coordinate our positions when you're ready, you got it." So when the navs did that, I was convinced that we were where they said we were. I could see some of the city, I knew we were close. I trusted the nav and off we went to the initial approach fix and the aircraft commander of the number one tanker turns his lights off, don't hear any more communication, so he's now radio silent. In the moonlight I could see his silhouette and down he descended into the darkness heading straight for Loring Air Force Base. Would have loved to have traded places with them. So number two, now, the old number three, and number two, and I, started the initial approach fix which is quite a ways south of the south end of runway 36. Runway 36 lands to the north, so going straight to the base is a lot faster and everything is...everything unfolds with that aircraft as he approaches the base.


Well, before I make it through the initial approach fix, I start hearing tower channel frequency communications that are really exciting. I've heard some combat radio discussions during some bomb strikes with F4s so, you know I can recognize a little stress in the voices and there was definitely stress on these voices. I wouldn't call it panicked but it was bordering on frantic. They're talking about, "Did you see it? Where is it now? Which way did it go? Oh my god, there it goes and it's down on this end of the runway, it's over east Loring, no it's back over the alert bombers" and that kind of communication, back and forth, quite a few different people talking on the tower frequency. I don't believe I could hear the tanker's crew-members chiming in. I'm not sure I would have recognized them, maybe. Maybe I would have. I do know that when the tankers at elevation, the KC-135 is set elevation their radar forward, forward-looking-radar was at a 240 mile range. I'm not sure what it is, it's substantially reduced at at ground level and they were flying in really, really low I believe. So the fact that they lost radar contact with the UFO in almost an instant is remarkable in itself and then they said, I did hear the communication say something to the effect that we've lost it and then as quickly as the communications, it's starting on tower frequency, they ended.


So that was kind of the end of the excitement and my wingman and I continued our normal approach through runway 36, we broke up the formation, I guess, after we hit the initial approach fix, so I landed. A couple minutes later the second airplane landed and taxied in. It's the middle of the night, there's not a lot of action going on at the base that we can see and we proceeded to our squadron normal debriefing room, had a couple of beers, filled out some paperwork and we're dying to talk to somebody that knew anything about what just happened out on the base. We couldn't find anybody that either knew it or dared talk about it so that was kind of the end of that night. The tanker that had departed the formation and gone off to chase the UFO was absent from the briefing room when we got there and then all of a sudden I realized that, well, he must be debriefing the Major, the same Major that gave that meeting that I talked about earlier however the story gets even a little bit more bizarre.

I see the aircraft commander of the first tanker. I'm not going to say his name. I've almost slipped a couple of times but I don't have permission to get him involved in my UFO story. So I'm not gonna say the name. I see him walking along in front of the base exchange the PX over at Loring, just couple of days after the flight I believe. So I pull my truck over got out and went running over to him and I said, "What the hell happened that night with that UFO" and he looks at me and he goes "I can't talk about it. I can't talk about it. You wouldn't believe me if I could talk about it." So that's the end of the story and it is incredible. It is. That's as true as I can remember. It's been a long time but I had a lot of experience at the time of that incident and I've had a lot of experience in the cockpits after that experience, but I've never had anything as incredible as that happen.”
Posted by arclein at 12:00 AM