Another MIB Incident at Pleasant Ridge 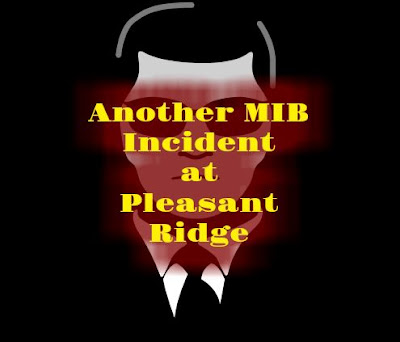 This is well before any publicity and thus interesting.  The only plausible explanation for this is disguised aliens working with our won agencies.  If it were us, a multitude of better dressage is available and none of it would excite any comment.

These folks are accepting an appearance that fully disguises as best as possible and also accepting unwelcome attention as well.  that surely means no ready choices.

The obvious corollary is that aliens able to adopt a human disguise easily are out there as well ans has also been reported.

In fact we have enough idle traffic to presume we are open for tourists and plenty of them.

.
Another MIB Incident at Pleasant Ridge

This comment was left on Beyond Creepy's Joe Borda tobacco farm video. Borda was an Ontario farmer who saw a UFO on his farm, followed by the arrival of MIBs and other weirdness:

“Commenting on the video regarding the Joe Borda farm incident. Around 1978 I moved with my mother from Brantford to Mt. Pleasant to live on her boyfriend's farm that was in the same concession just south of Joe's farm. Around 1979 I was on the farm alone as my mom and her friend had gone camping for the weekend. At around 2am I awoke to the sound of a vehicle idling by our back door. At first, in a haze, I thought I was dreaming but finally awoke enough to get up and go downstairs to see who it was. About 15 ft from the back door was a large black Lincoln in spotless condition with blacked out windows. As I stared for a minute a thin tall man got out with slim and pasty complexion wearing a black tie / suit and white shirt. As the door was open to the car I could see a man in the passenger seat dressed the same with similar "looks" who stared straight ahead as if in a trance.

The figure asked me for directions to a camp that was a mile away on Pleasant Ridge Road. It was a religious camp that I learned later had be closed for years. He thanked me and left. I woke up in bed in the morning but don’t remember going there and although I thought only 10 minutes had elapsed it was 7am the next morning. I always awoke automatically at 4:30am. I felt like I had dreamed the whole thing.

Now as years have passed and more information is available as a result of computers, without looking I have come across many stories of these mysterious people in black. Like the ones on the Borda farm that was only about 1500 meters away across the bush. Not making any assumptions or drawing any conclusions but feel this is related to what Joe experienced on his farm during or about the same time period.”
r.