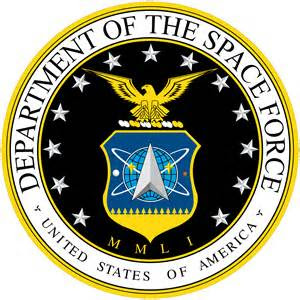 We already have the fleet or at least the beginnings of such a fleet so it makes perfect sense to now set this up.  You can see here though just how little has been let out.

I expect this will set up and remain quiet fro a while yet.

I cannot wait to see how the USN fits into this.

As part of its version of the 2018 Defense authorization bill, the House Armed Services Committee voted late Wednesday night to create a sixth branch of the U.S. armed forces: the U.S. Space Corps, which would absorb the Air Force’s current space missions.

You could be forgiven if you haven’t been closely following the debate about creating the nation’s first new military service since 1947. Several members of the panel said they themselves were blindsided by the proposal, and staged an unsuccessful effort to block the change until it could be studied further — or at least until the full committee had held at least one hearing on the subject.

Rep. Michael Turner (R-Ohio) said he only learned about the proposal last week, when it first came before the subcommittee on strategic forces.

“I chastised my staff and said, ‘How could I not know that this was happening?’ They said, ‘Well, they had a meeting about it and you missed it,’” Turner said. “A meeting is certainly not enough. Maybe we do need a space corps, but I think this bears more than just discussions in a subcommittee. We have not had Secretary Mattis come before us and tell us what this means. We have not heard from the secretary of the Air Force. There’s a whole lot of work we need to do before we go as far as creating a new service branch.”


Rep. Martha McSally (R-Ariz.), a retired Air Force colonel, was similarly surprised by the Space Corps proposal. She said she had not been aware of it until it appeared in the bill the full committee debated on Wednesday.

But the measure, which would also establish a new U.S. Space Command and make the new chief of the Space Corps the eighth member of the Joint Chiefs of Staff, has the support of both Rep. Mac Thornberry (R-Texas), the chairman of the full committee, and its ranking Democrat, Adam Smith (D-Wash.) The bill language was developed by Reps. Mike Rogers (R-Ala.) and Jim Cooper (D-Tenn.), the top Republican and Democrat on the strategic forces subcommittee.

All of them argued Wednesday that the creation of a dedicated service for space had been studied for years, and that the idea’s time had come.

“There’s been nothing shortsighted about this,” Rogers said. “We started working on it vigorously in September, and we’ve had countless meetings with a number of experts who have advised us as to how this should be construed. In fact, this idea for a space corps as one of the solutions to Air Force space came from the Rumsfeld Commission in 2001. GAO has done three studies on this, all of which tell us that you cannot maintain the current organizational construct of the Air Force and solve the acquisition problems and the operational problems that we have. The Air Force is like any other bureaucracy. They don’t want to change.”

Cooper agreed, saying the creation of the new service would properly reflect space’s importance as a new warfighting domain, “whether we like it or not.”

“And space has not been given adequate priority by our friends in the Air Force,” he said. “They do many things wonderfully well, but this is a new area, a new responsibility that a corps would help us address more effectively. We could wake up one morning and be blinded and deafened by adversary powers, because so many of our most precious assets are up in space. The chairman has had countless meetings about this over 10 months. I don’t know where my friend from Ohio has been.”

Smith, the full committee’s top Democrat, said that schedule left plenty of time to iron out any unanswered questions about the plan.

“I think it’s being done in a deliberate and intelligent manner,” he said. “Space has changed. We’ve already taken for granted for too long that we dominate space, and we don’t anymore. We need to be ready to confront this, and yes, buried deeply within the Air Force, you could do that, but it doesn’t get the priority it deserves, given how important it is and how it impacts everything that we do.”

Although the Air Force’s top leadership has not testified before the House on the proposed reorganization, the service’s secretary and chief of staff have both expressed opposition.

“My sense is that we have an opportunity being placed in front of us right now to take a look at what is the way we fight in the air, on land, at sea, and we take those processes, procedures, tactics, techniques, and actually apply them across the space domain,” Gen. David Goldfein, the Air Force chief of staff, told the Senate Armed Services Committee last month. “And so right now, to get focused on a large organizational change would actually slow us down. I think it would actually move us in the wrong direction.”

But Thornberry said opposition from the Air Force is no reason for delay, pointing out that the Pentagon has a long history of fighting changes to its own organizational structures.

“There are times when an issue becomes ripe and it is our responsibility to act. I believe this is the time for us to act.”
Posted by arclein at 12:00 AM