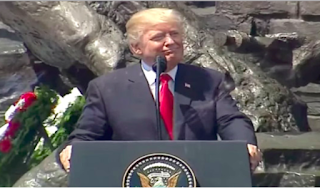 The words have now been spoken, and they are not from my mouth, but that of Trump.  The stage is now been set for what i call the great confrontation in which Christianity naturally subsumes the entirety of Islam.

It will never be all about war as that is counter productive, but the assertion of natural rights and a proper illumination of the teachings.  It will be sufficient to redline the Koran for phrases objected to by Christ and then combining the Redlined Koran with the New Testament as one.

Yet most do not understand any of this and are blind.
While Overseas Trump Hails Populist Poland, Declares West Must ‘Defend Civilization’ and ‘Faith’

During his second visit overseas, President Donald Trump praised the Polish people but warned that the West needs to “defend civilization” against the onslaught of radical Islamist terrorism.

“We must work together to confront forces that threaten over time to undermine our values and erase the bonds of culture, faith, and tradition,” Trump said to a cheering crowd in a speech on Krasinski Square in Warsaw, Poland, Breitbart News reported.

“Because as the Polish experience reminds us – the defense of the West ultimately rests not only on means but also on the will of its people to prevail. The fundamental question of our time is whether the West has the will to survive?”


“Do we have the confidence in our values to defend them at any cost? Do we have enough respect for our citizens to protect our borders? Do we have the courage to preserve our civilization in the face of those who would subvert and destroy it?” he questioned.”


“Let us all fight like the Poles. For family, freedom, for country, for God. God bless the Polish people, God bless our allies and God bless America,” he concluded.”

Trump went on to praise Poland as a “faithful nation” and pledged support for their continued battle against “radical Islamic terrorism.”

The president added that the world is being confronted by an existential threat.

“We are confronted by another oppressive threat – one that threatens to export extremism and terror all around the globe. The EU and America have suffered one terror attack after another. We are going to get it to stop… We must stand united against these shared enemies to rip them of their territory.”

Trump also praised Poland’s role in NATO and criticized the “destablizing” of Russia.

“American knows that a strong alliance of free, sovereign, nations is the best defence for our freedoms and our interests. That is why my administration has demanded that all members of NATO finally meet their full and fair financial obligation. As a result of this insistence billions of dollars more have begun to pour into NATO.”

Trump’s visit has been an extremely successful one and has gone toward strengthening American ties to the great nation of Poland.
Posted by arclein at 12:00 AM