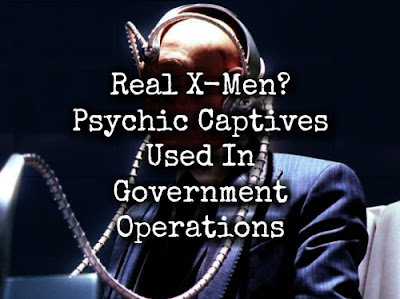 .
Here is the problem.  I know that this deep secret program exists and it has existed for a long time as back to the fifties.  In this case, his friend was uniquely strong enough to stop someone's heart.  I do not think they would have had him do this otherwise.

I am also surprised this report came out, but it may also be part of a deliberate release.  It is thus possible to warn off bad boys long before they become a threat.  It is clearly a powerful weapon that can fall into bad hands.

however also consider that this makes criminal leadership highly undesirable and that may well be seriously valuable.  It may be the shape of the future, but then the future will reside leadership at the natural community level anyway and specific talents will be recruited only for specific tasks such a building a structure.

Mark in California called in to tell his strange account:

“I had a friend contact me concerning some research I was doing. I was really interested in this sort of thing. (the show that evening was about psychics and the Montauk Project) He seemed to have some psychic abilities. He was already in the Marine Corps as a sniper. Worked with the CIA. He was in Force Recon which is like the Marine corporation of the Navy Seals. He had refused an unlawful order along with the rest of his team when they had gone into a village during Operation Jawbreaker to target a high ranking member of the Taliban or Al Quaeda, and they found only his wives and children. They were ordered to kill these civilians and they refused. Then, one by one, the team members were being picked off. They were being killed in mysterious ways and so my buddy got out of the corps and became a mercenary. He was working in Africa. He didn't tell me where he was, didn’t tell me anything about the circumstances of his work there. But one night I had a dream involving a truck full of mercenaries in a little shanty village and the circumstances, so I described all this in an e-mail which he got 9 days later and his response to me was 'No way!' And it turns out the very things that I had described 9 days earlier had happened to him 2 days before I got my e-mail so it seems to show that his ability could actually move backwards and forwards through time as well, that he could have a stressful experience, transmit that to me back through time. I would get it in the form of a dream. So we began working with this.

When he got back to the United States this fellow had an uncanny ability at playing poker. He could win all the time because he could get inside the mind of the people who were at the table with him. He would go to Las Vegas every weekend and come home with between 50 and 70 thousand dollars and it was because he could sort of insert his own consciousness into the minds of other people around him. He said it was all done through the eyes. The eyes were literally the windows of the soul. So as time went on we began experimenting with the possibility of helping to find missing people. This kind of thing. There was a murder case that happened in Mendocino Countywhere a local county supervisor had gone out to check on some property. Apparently there was a marijuana grow op out there and the man unfortunately was shot and killed by someone who was working this marijuana grow. They had a picture of this guy up on the website and my friend said he could get into the guys mind if he had a clear picture of his eyes. So I emailed him a picture of this guys eyes and he told me everything about where the perpetrator, the criminal, the murderer was. So I contacted the Sheriff's Department in Mendocino and I told them about this, told them where the guy was hiding, how he was hiding; he was resupplied by breaking into vacation cabin homes up in the mountains. Two days later a picture of this guy actually doing that was captured on a game camera that showed up in a local news, so I knew we were on the right track. Then he and I both noticed our computers were being hacked and then everything we were communicating back and forth was being followed very closely. They wind up getting this guy in a shoot out, he was shot and killed. So a couple of days later a bunch of black SUVs show up.

If I could, I would like to back up a little bit and explain something else that was going on behind the scenes. This individual had an unusual blood type which lead to excessive clotting if he had anything with vitamin K in his diet. At one point he had a blood clot that got into his brain he went into a coma. He was in a coma for about two weeks and when he came out he was paralyzed for most of the left side of his body. His girlfriend was a doctor, student. After about five or six months he had regained most of the motor control on the left side of his body but it had enhanced his physic abilities to the point where he could actually do things with his mind. He could actually psychically heal without touching people. He even healed me all the way from Dubai where he was living. But in a moment of anger. There was a question of a will as he came from a family of millionaires and he was written out of the will through an illegal process. And he imagined giving his father a heart attack all the way from Dubai and the next morning his sister called him to tell him his father had died from a massive heart attack the night before. So it took me about two weeks to talk him down. He thought he was going to Hell. That he'd be damned to Hell because he'd done this. And he wasn’t entirely sure he could do this until he began experimenting with people on the street. And if he could make eye contact he would find that he could actually get into their head and mess with their heart.

So getting back to this murder investigation in Mendocino and the tracking down of this individual. Our computers began to show signs of being hacked and sure enough there was this incident – three black SUVs pull up at his house in Lake Arrowhead down in southern California. He's essentially taken into custody by these government agents, driven for about three hours estimated to be in a northerly direction which would have put him in the center of China Lake Naval Weapons Station where he said he was brought down into a massive underground facility where there were a number of other individuals who could do things like something out of X-Men; people who could start fires with their minds, people who could move objects with their mind. Many of these individuals were young kids and very often their bodies were being pumped with all kinds of pharmaceuticals and supplements to enhance their abilities. You’d think it would wind up shortening their lives. Anyway, one of the things they found was that he could see through the eyes of a target. This was called 'a consciousness insertion.' This was how he was so successful at gambling. He would literally get inside the other competitors head and see what cards they were holding. But now he had this ability to either heal or to kill at a distance. And they begin testing him.

This was in December of 2011. They took him into a room and they sat him down with a number of photographs and they showed him just the eyes, a high resolution photograph of someone with sort of Asian looking eyes, and they said, 'Tell us what this guy is thinking.' So he looked in the eyes, captured the frequency of the consciousness of this target and he said, 'Well, I can't tell you what he's thinking because he's actually thinking in his native tongue. It sounds like it might be Chinese, Japanese or Korean.' He said, 'I can't tell you, but he knows that I'm inside his head and he's highly upset, highly agitated and very frightened. He's on a military train of some kind, he's with a bunch of military personnel. But I cant really tell you what hes thinking because he's thinking in his own native language.' They said, 'Okay, kill him!' So he stopped this guy's heart.

So a couple days later I hear from this guy and he basically says this is what they had me do. I said, 'Well, you don't know what happened while you were in this underground facility?' He said, 'No, why, what happened?' I said, 'the leader of North Korea died of massive heart attack on a train two days ago on the very day you were doing that targeting. Do you have any idea what this means?' He said, 'let me tell you what it means, they got people with these abilities just like mine that work with the Secret Service, CIA and these are people that can accompany the President. They can look out ahead in time. They can project any kind of assassination attempt might be attempted. They can see through time to who the operator will be and they can target that individual in advance, even give that person a heart attack before they even consummate the assassination attempt. So think about that for the implications for the political system and the idea that you might actually be able to threaten someone, maybe even someone on the Supreme Court. That makes a decision to break the tie-breaking vote that gets decided, for example, if Obamacare gets pushed through. Or is found legal. Things like this.' He says, 'it is extremely disturbing how this ability on the part of all these individuals is being used by people within the government.'”
Posted by arclein at 12:00 AM