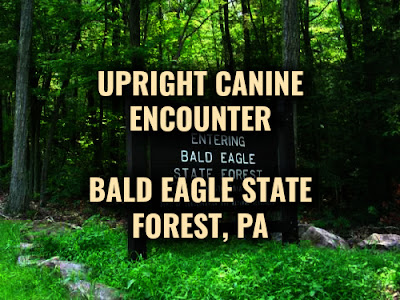 The reporting level is rising steadily as publicity increases.  Excellent report here.  We got a good long look. The animal has its summer coat.  We also got to get a feeling for its muscular confirmation.  Recall this sucker likes trees.

Again the witness got off lucky as the creature felt no need to take them out as it could easily have done.

This evening I received an upright canine report that was obtained by my colleague Butch Witkowski:

A resident of the Weikert, PA area a friend were on a designated hiking trail in the Bald Eagle State Park when they heard something walking to their right in the woods as if following them. They looked on several occasions in that direction but saw nothing and continued to hear the noise as if something was walking parallel to them. Their first thought it was a deer but the substantial noise made them second guess it could be a bear. The one gentleman was armed with a .40 cal Glock pistol so they continued and heard a sudden stopping of the noise. They stopped to look around and there was nothing visible to their right or left. They turned around and behind them at approximately 50 yards stood a large animal they first thought was a bear standing on its hind legs but quickly realized it was not a bear.

Witness Description: A large wolf like head with short pointed ears, long muscular human like hands, massive chest and very thin around the waist area. Muscular legs and from the knees down what looked like a dogs hind legs. It's coat was very short and dark brown. (could have been black but looked brown) It made no movement toward them but just kept staring with what is described by witness as bright yellowish eyes. They started back to the area where they left their car and looking behind constantly but it was not there but it was following again to their right and there was noise as before emitting from the woods. Upon arriving at their vehicle there it stood in the tree line watching them and stayed was still there as they left the area.

The one witness who made the report works for the DCNR and marks out damaged old growth trees to be cut and trees blocking pathways hiking trails and fire lanes to be removed. He would like to remain anonymous because of his job but left a contact if I needed more information. His companion is really shaken up and would rather never discuss it.

NOTE: This is our first Pennsylvania upright canine / dogman report since the winter months. If the sighting pattern of the past 2 years continues, then we may see more activity in the late summer / early autumn. The PA Upright Canine/Dogman Witness Sightings Map will be updated. Lon
Posted by arclein at 12:00 AM