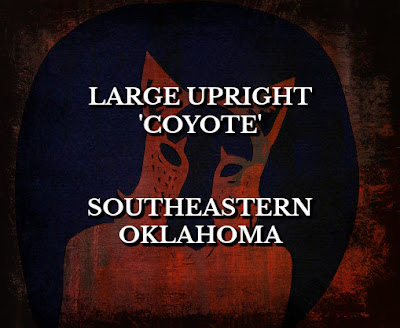 Because there is a place to land reports, we are getting plenty of them.  We are well past fifty and shall easily reach a couple of hundred.

This is another giant sloth again and it is getting too comfortable around this particular site.  High risk of an ambush attack.

At least she got a good look and picked up on the long hand claws.  This is a very dangerous situation and i would never relax on the porch here.  The woods need to be knocked back or better yet they need to be groomed to well above head height..


Hello...I want to report disturbing activity around my residence during the past 2 weeks. I hope you can give me an idea of what we're dealing with. I live in a rural area of southeastern Oklahoma, a few miles from Talhina. I've lived here all of my 48 years and have never experienced anything weird around here before.

On June 1st about 10:30 pm I was on my back porch reading the newspaper. My husband was getting ready to leave for work. My porch faces a large wooded area, about 800 ft or so from the lake. I have a small yard and the edge of the woods is about 50 ft from the house.

My husband was walking out the back door, said goodbye and walked to his truck. As soon as he pulled away, I heard a load shrill sound coming from the direction of the lake. It reminded me of pig squealing, but was much loader and scarier. I didn't get up from my chair as I looked towards the woods. After a few minutes, I heard something heavy walking through the woods. I was definitely something or someone walking on two legs. It was so dark, I couldn't see anything. Suddenly, 3 deer burst out of the woods and ran alongside the house. I thought that they caused the noise, so I got up and walked into the house.

Most nights, after I come home from work around 8:30 pm, I eat dinner then go out on the porch and read the newspaper. Ever since that first night, I heard the same shrill sound on 4 other occasions. My husband sat with me a few times, and he was surprised by the sounds. He has been a hunter all his adult life, but didn't have an idea what made those sounds.

This Tuesday night, I was sitting on the porch talking to my daughter by phone. My husband was working that night. It was about 10:45 pm. I had a strange feeling most of the evening and kept my eyes focused towards the woods. I was about ready to get up and walk into the house after ending the call, but then I noticed a pair of bright yellow eyes looking at me from the woods. It was only a few feet into the brush and the eyes were at least 7 feet from the ground! I ran into the kitchen and quickly closed the door and locked it. I turned the lights off inside, but the porch light was still on and the edge of the woods was slightly illuminated.

As I peeked out of the window above the sink, I noticed a tall, huge dark figure standing in the back of the yard. The eyes still shown brightly and were looking in my direction. As I continued to watch, my eyes were adjusting to the low light. I then noticed the long thick arms with fingers and long nails. I then recognized a long snout and long pointed ears. Then suddenly, it turned and ran into the woods. It was gone. I was literally trembling, because I had no idea what I just saw. I called my daughter back and told her. My son-in-law and her immediately came over and spent that night. He brought his rifle with him.

The next morning, I told my husband what I saw. He is part Osage and believes in animal spirits, but he was confused by this thing I described. He told me that it may be a 'trickster spirit' and if we ignore it, it won't bother us. I'm not so sure I believe that. This didn't look like a spirit and literally resembled a huge dark coyote walking on two legs.

NOTE: I called the witness and tried to answer her questions. She has not been able to see tracks and any other evidence. She heard the shrill sound last night before she went to bed. Her husband contacted the authorities, but she said that he was just making inquiries...wanting to know if there had been other reports. It seems they refused to give out any information. Her neighbors have not noticed anything unusual, but she told me that they were elderly and rarely go outside. I asked her to keep me informed of further incidents. Lon
Posted by arclein at 12:00 AM