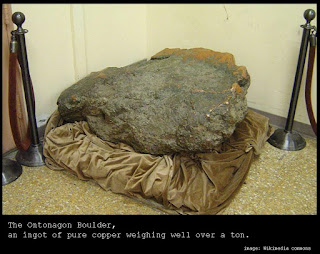 Today we discover pay dirt.  This expedition began on the west coast of Europe and then crossed the Atlantic to come to the Mississippi and then sailed up river to arrive at the copper fields there.  This can be no other place on earth.

What this also establishes is that the assumption that the Kolbrin left Egypt to end up in England is quite wrong.  What this confirms is that a library  from Egypt found its way to the established colonys along the Mississippi.  There additional reports were added over a number of lifetimes until these colonies needed to be abandoned for a return to Europe.  This inevitably meant  the Irish Sea and the Bristol Gulf.

The whole library continued to be kept in safe keeping and was possibly even translated into Latin during the long span of the Roman Empire.  Similar material from Egypt was used to put together the Hebrew Bible.

We seem to have the library of a community first initiated in Egypt and thus informed spiritually from more ancient traditions including reports from the Pleistocene Nonconformity. This library was carried to America as part of this community. Further material was added..

Before we left Droidesh they brought living sheep and goats and hung them upon a tree standing in the place of assembly. Birds of bright colours and things of worked gold and silver were hung upon the branches. Perfumes and oils with garments. They danced about the tree and hewn wood was brought and laid against it. Three maidens came and it was lit and burnt as an offering to success.

We went Northwards and came to a strand where many ships were drawn up and armed men such as we had not seen before were disputing among themselves with great noise.

We drew off, for they were foreign to us, but others came behind and we were taken in among them and brought before Albanik, the Leader of Armed Men. They pushed around about us and some cried out for blood. They wished to take our ships and possessions, but the leader said, "Leave the deed imtil the morning, for if blood flows now it will not cease with the foreigners".

That night the wife of Albanik spoke to him and said, "It would be a foolish thing and an evil deed to slay these strangers, for they have wisdom and are men of learning. Why destroy something you may use to good end?"

The leader listened to her advice, for he knew there were many wounded men and none more skilled than we to attend them. Because she was carrying a child our lives were spared and our goods restored to us.

The commander among the captains was a warrior who, while hunting, had slain his own father and so had to flee his own land. With him he had taken the queen captured by sly and subtle means, but we feared him not, for Albanik looked upon us with favourable eyes.

Of the warriors who came with us there were a score of score of men from Ilopinos. They wore helmets of bronze with plumes of scarlet and purple. Their shields were of bronze burnished, so that they shone like the sun and were edged with a band of hardened metal. In length they were two and a half cubits, and in width one and a half cubits. They had spears of unknotted wood six cubits in length, with blades of hard metal set in sockets.

[ notice the word hard metal for edges and hard spots.  may well be iron or well tempered bronze. - arclein ]

Their swords were of pure hard metal worked in a strange way, and in length one and half cubits and in width three fingers breadth. They were horn-handled and bound about with wire of copper and silver. Some among them were armed with war javelins and darts. They had a curious dart that turned over itself in flight, and another that struck in from the side.

In battle they stood three and three to withstand the rush of the enemy, but they were weak in attack, for they moved heavily. With them were slaves and six score attendants who were plunderers of the battlefield, pillagers of the land, the cooks, the baggage keepers and the carriers of burdens. The warriors were the battle craftsmen.

In seven days all the ships sailed together and in seven days came upon some land by the sea. It was a place of the dead where all was desolation. In the centre of the land by the sea there stood a temple which had fallen into itself, for there were no people to keep it. The leaders and the chief among them went up to the temple and made sacrifices to their gods whose voices they wished to hear.

The daughter of Laben, the armourer, had hidden herself in the opening behind the flame and spoke to them in a strange tongue. They heard her voice and thought it came from a shadow god. She told them of the land of her mother, called Belharia, and bid them find their way there. She told them to take the Bethedan with them, for they brought good fortune and were beloved by the gods. The leaders went out from the temple believing they had been granted a vision.

We sailed with a large company towards the West and had nothing to fear, except the whirlpool, for the Red Men with us knew the way of the waters. For long days we saw only the sea, and the landsighting birds all came back.

We went out through the mouth of the sea into the sea of the Great River. Past the lands of white copper to the Place of Painted Men, where we drew up the ships and staked them.

[  They sailed west until they came to the Mississippi, truly a great river.  Their guides are red men.  they traveled up river past the land of white copper.  The only place on Earth is in Lake superior.  Then thety made land fall.]

Among the fighting men were some from Sparsia whose leader was Korin, called the axeman, but whom we named 'the cunning one'. These went out into the forests to hunt and the king of that place sent men to take them, but they refused to go and there was a loud dispute.

The bodyguard with the leader of the Painted Men were bowmen and one shot an arrow at Korin. He slewed aside behind his shield and the arrow turned into the throat of a Painted Man who held a sword against him. This started a great fight between forest and sea, and though surrounded by many enemies Korin fought through them. The battle was his because he went forward through the forest and attacked the houses of the Painted Men.

The ships were divided and those who wished to set up the eagle and serpent went to the Harbour of Giants in Belharia. The same giants are builders of great temples and they are six cubits tall.

The ship with Korin stayed with us and he hunted them out of their caves and slew them all, save one giantess.

She came to us, bound as a surety for the life of the wife of Albanik.

We came to a bay on one side of which was a forest and on the other a plain where herds grazed. For the men of that place it was the time of the feast of fires and they held games upon the shore and ran races in cleared land behind. At this time they would not fight, so we met them in peace. They wore garments woven in two parts and belted with hide. They had caps of skin or leather, and the tunic which hung about them was darkly coloured in blue, green and brown. They enclosed their legs and feet in dressed skins bound in front with throngs. They had many ornaments of copper, but little gold or silver, though their armbands and brooches shone like silver.

They had the art of making copper like silver or gold.  [ this is possible with native copper - arclein ]

These people hold a great feast before the beginning of the heat, when their god Mago appears. Inside the god were the spirits of men whom the god had eaten, and their voices could be heard calling for deliverance from darkness. Because of the feast these people demanded the giantess, and she was given over to them for the days of feasting.

We did not know the ways of these people and when we saw they wished us to drink blood, we drew apart from them. The headman sent a messenger to us and Korin and the giantess wrestled together, but the giantess was the sfronger, so Korin lured her towards the cliff edge. Korin taunted her and laughed at her clumsiness, and then at the break of the cliff he tricked her, so that she rushed forward. As she passed beside him he turned behind her and pushed, so that she fell over the cliff edge on to a large black rock below. Her back was broken. The same black rock was later split and taken up to be worshipped.

In the place to which we came the deathless stars ride high. The adze rests on the morning and the watchman at the gate of the sky sits at the eastern tiller in the evening. The falcon is rarely seen clearly. This is the Land of Dada.

We warned them, but they would not listen. They were fasting before the battle, the sacred fast before they ate the meat of the offerings. We buried salt beneath the floors of their houses, so that no man would live there again. When the horns sounded the alarm and danger threatened, these shrewd bargainers came running to us.

Their faces were wet with the sweat of fear and their lips trembled. When the danger was past they came out with chests puffed up and tongues bragging about their deeds. They were the first to push forward for a share in the plunder.

Korin left to seek them. He took two ships but did not return to his children. The leader may be carried away, but the lowliest of those who followed him has a will which need never be broken. Now when men wish to say a thing is impossible they say, "Where is Korin?"
Posted by arclein at 12:00 AM