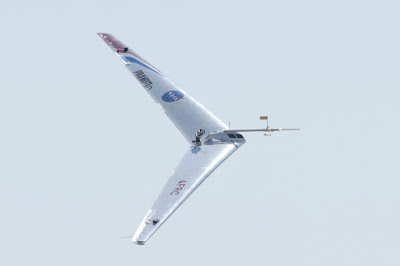 What has just been observed is wonderful stealth technology on a boomerang shaped craft.  Wow and surely one of ours as well.  It is something we would cook up in order to operate in our atmosphere.  An alien would hardly bother.


We already understand the gravity ships and i expect that this tech will be in these smaller craft as well.  It would allow a high performance craft to actually land.


All good stuff.  Makes all those other craft obsolete and likely designed to smoke the world.  also recent wind tunnel tests are surely from work done a long time ago as it is is new stuff..

(1)I was walking northbound from my parked truck to enter the building I work in.

(2)I have always kept my eyes on the sky, even as a child. I have seen many unidentifiable craft in my days and my grandfather worked for Boeing and Rockwell. This helped create my interest in the sky watching at a very young age.[ this is an unusual observer - arclein ]

(3) At first glance I thought that the object was a hovering helicopter, a bunch of balloons, or possibly a drone of some sort. The lack of noise or lights made me discredit the possibility of this object being a helicopter or drone. I work in the aerospace industry now and my company is 5 to 10 miles from LAX. There are multiple flight paths that I observe daily to my admiration of aircraft. There are also a large number of military flights that take place in this airspace, but the military craft are usually helicopters and not jets. They are always very loud and noticeable. V22 Ospreys fly over the 110 South and then hook a right westbound over Rancho Palo Verdes quite often as well.

(4) When I first observed the object I was facing west from my location and I was under the impression that it was hovering in place. In retrospect, it may have been advancing towards my position because this was the only point in my observation that I was under the impression it may have been hovering. Once I noticed it was moving I also noticed it was doing so at a steady pace. It was traveling north east slightly (more north direction than east) and I observed it slowly adjust it's path and change direction from north east to north west. It appeared to be attempting to morph.

Despite the surface of this craft moving around in a very unstable and liquid type motion it's velocity and trajectory were stable. It was almost like a cloud of heavy metallic black liquid but it's overall shape remained relatively uniform. The nature of this object made it very hard to focus my vision on despite the fact that the craft was dark black and the grey clouds and sunrise made the sky very contrasted against the color of the craft. I felt as though it was tricking my eyes into looking at the clouds above it instead of the craft itself. Shortly after it changed direction (north east) it began to shift it's shape more noticeably and it went from a big morphing liquid blob to an elongated and very small boomerang type black craft that was no longer morphing. It seemed to become completely solid at that point. Once again with no lights or sounds. Almost immediately after it shape shifted, It began to shrink in size at a extremely impressive rate.

(5)I have witnessed many different types of unidentified objects and this was by far the most troubling and emotional sighting. I felt shocked and scared and for once I felt terrified instead of intrigued or awestruck. I have seen lights, orbs, but never anything like this.

(6) It shrank in size until it was gone. Either it literally shrank, or it traveled away from me at a great speed. - MUFON
Posted by arclein at 12:00 AM